A TALE OF TWO THIEVES 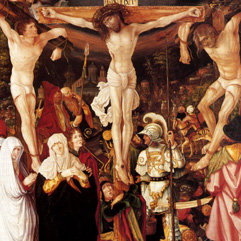 In this time when the church is undergoing its Passion from all the scandals and apostasy from the clergy,  and the world at large is being shaken up like nothing else in decades, perhaps since World War II, I would like to start off this blog post with the Act of Contrition, which can still be prayed even when the Sacrament of Penance, with which it is normally associated is not available in many parishes because of the coronavirus pandemic. Then I’ll relate this prayer to our subject matter: A tale of two thieves:

O my God, I am heartily sorry for having offended Thee, and I detest all my sins, because I dread the loss of Heaven and the pains of Hell, but most of all because they offend Thee, my God, Who art all-good and deserving of all my love. I firmly resolve, with the help of Thy grace to confess my sins, to do penance and to amend my life. Amen.

We read in Matthew’s and Mark’s Gospels that the two thieves crucified with Christ (as pictured above) were cursing Him out at Calvary, but in Chapter 23 of Luke’s Gospel  we get a more nuanced account which I will recite as it appears in the Ignatius Study Bible. It reads as follows:

One of the criminals who were hanged railed at him, saying, "Are you not the Christ? Save yourself and us!" But the other rebuked him, saying, "Do you not fear God, since you are under the same sentence of condemnation?And we indeed justly; for we are receiving the due reward of our deeds; but this man has done nothing wrong." And he said, "Jesus, remember me when you come in your kingly power."And he said to him, "Truly, I say to you, today you will be with me in Paradise."

When I meditate on the 5th Sorrowful mystery of the Rosary, the crucifixion of Jesus, I find myself coming back to the second of the Seven Last Words (phrases, actually) our Lord uttered from the Cross, when He gave Dismas the good thief a truly heavenly pardon, with those words “today you will be with me in paradise”.

I often wonder if in a crisis, I would  be more like Dismas or like the one we know as the bad thief, Gestas (also known as Gesmas)? Would I show our Lord remorse for my sins or resentment for my predicament?

While Gestas is busy cursing out Jesus saying in effect no doubt with more than a few unprintable words “Hey Hotshot, get us outta here. Save us!” probably so he can engage in more wrongdoing, the other thief, now known as Saint Dismas, suddenly has a much different attitude.

Dismas rebuked his miserable colleague, who was also flanking Jesus, and recognized not only our Lord’s innocence but his own sinfulness as a thief, and that as horrible as his punishment was, given the mores of the time he probably deserved it.

In a great meditative work entitled Life of the Good Thief, Monsignor Gaume pointed out that, in 1st century Palestine, you stood a good chance of losing your possessions and even possibly your life being attacked by bandits when traveling somewhere.

In one of our Lord’s parables, a  Good Samaritan heals a man who has been savagely assaulted by robbers on his journey from Jerusalem to Jericho, leaving him “half-dead” (Luke 10:30-37). ”Highway robbery” was something that actually took place quite literally. It wasn’t just what we would call today price gouging!  Under the Roman penal code those engaging in it who were brought to justice were to be crucified.

With his appeal to our dying Lord on the cross, as Archbishop Fulton Sheen once remarked, Dismas, the good thief, stole Paradise! Sheen observed in his book The Life of Christ that Dismas was no doubt moved and had an incredible infusion of grace after hearing the First of our Lord’s Seven Last Words mentioned earlier  “Father, forgive them for they know not what they do!” (Luke 23:34.)

It is worth noting here that there are two church approved private revelations that echo Sheen’s message. As an important reminder, we are not required to believe these as Catholics but the church has deemed these as being worthy of belief in that there is nothing in them that contradicts faith and morals.

Ven. Anne Catherine Emmerich revealed in the rivetingly detailed account of her visions in The Dolorous Passion of Our Lord Jesus Christ published in the 19th century that  Dismas “was was deeply moved at the prayer of Jesus for his enemies...The prayers of Jesus obtained for the good thief a most powerful grace; he suddenly remembered that it was Jesus and Mary who had cured him of leprosy in his childhood.” (I’ll touch on that more shortly.)

She continues further on that  Dismas, after hearing the great affirmation of our Lord’s mercy, was “enlightened and touched: he confessed his sins to Jesus, and said: 'Lord, if thou condemnest me it will be with justice.' And Jesus replied, 'Thou shalt experience my mercy.' Dismas, filled with the most perfect contrition, [emphasis added] began instantly to thank God for the great graces he had received, and to reflect over the manifold sins of his past life.”

(Incidentally, It makes a somewhat sobering side note to observe, as Sister Emmerich did, that Jesus later encountered the bad thief Gestas’ soul “being dragged by demons into Hell”!)

In addition, Ven. Mary of Agreda, a 17th century Franciscan nun, wrote in her account of revelations given to her by our Blessed Mother in her voluminous work The Mystical City of God that Dismas was “moved by true sorrow and contrition for his sins”, [emphasis added] when he rebuked Gestas as mentioned. She agrees with Anne Catherine Emmerich and Bishop Sheen that Dismas’ contrition was brought on by Christ’s appeal for His Father’s mercy on that sinful lot he saw before Him!

Again, you don’t have to take any of these apocryphal observations, along with the one that follows, as part of some fifth Gospel, but they are good for meditation nonetheless!

Dismas’ leprosy comes up also in a great book for rosary reflections entitled The Life of Mary as Seen By the Mystics, in which the author, Raphael Brown, skillfully blends mystical visions from four different religious over the centuries, including those from Ven. Mary Agreda and Sister Emmerich. In that very readable work he writes about the Holy Family’s flight into Egypt to escape the murderous King Herod. This account follows:

“One evening the Holy Family arrived at the camp of some highway robbers, who were at first inclined to treat them cruelly. But when the leader looked at the Infant Jesus, somehow his hard heart was deeply touched, and he ordered his men not to harm the travelers. Taking them into his hut, he had his wife give them some food and settle them comfortably in a corner.

At Mary’s request the woman brought her a large container filled with water, in which the Blessed Virgin gave her Son a bath and washed His swaddling clothes. Meanwhile the chief robber said to his wife: “That is no ordinary child—He is a holy Baby. Ask His Mother to let you bathe our leprous son in the water she has used. Perhaps it will heal him ...”

But before the woman said a word, Mary urged her to wash her sick son in the water. Then the mother brought in her three-year-old boy, whose leprosy was so advanced that it covered all his face and body. Yet as soon as he was placed in the water that Jesus had used, which was now clearer than it had been before, the sick boy’s skin became perfectly smooth and healthy.

His mother was almost beside herself with joy and gratitude. She tried to kiss Mary and Jesus, but the Mother of God gently held her off and did not let her touch either of them. The father told all his men about the miracle, and they crowded into the hut and stared at the Holy Family with awe.

Later Mary had a long talk with the mother, who promised that she would stop living from crime as soon as she could. That night Mary hardly slept at all. She remained sitting on her bed, praying. The next morning when the Holy Family left with some new provisions, the robber chief gratefully said good-by to them and exclaimed with deep emotion: “Remember me, wherever you are!”

(Thirty-three years later his robber son said to the Man crucified beside him on Calvary: “Lord, remember me when Thou comest into Thy Kingdom!” And that time—again due to Mary’s prayers—Jesus healed his soul.).

While Dismas still grew up to lead a life of crime, after this incident does it not seem as if our Blessed Mother and Baby Jesus planted some seeds of grace and contrition in the good thief’s heart that would come to full bloom at Calvary? Again, you don’t have to take this idea as gospel truth, but it is worth reflecting on nonetheless.

Keep in mind that one should never misconstrue St. Dismas’ particular story of repentance as license to live a deliberately immoral life while counting on a majestic pardon from our Lord when facing death! That constitutes what we call the sin of presumption. God cannot be “played” as it were.

But if you approach our Lord with sincere sorrow for your sins, you can strengthen your repentant spirit much like the good thief and Jesus will indeed show you His mercy!

(Granted, most of us may never have engaged in any such lawless behavior as did Dismas, but just because I’m not a drug dealer, a crook, or a murderer, doesn't mean I don’t have sins I need to offer up to Jesus on the cross while I ask for His forgiveness!)

While confession itself is largely unavailable right now in the midst of the coronavirus pandemic, you can still make what is known as an Act of Perfect Contrition as described here and here.

This is not meant as a substitute, but rather it paves the way for your necessary confession when the sacrament becomes available in your parish once more. The important thing is to be sorry for the sins you’ve committed not just out of fear of punishment but also out of regret that you’ve hurt Jesus in committing them.

That can also strengthen your resolve not to commit them again, or if you do, to repent of them as quickly as possible. If you fall, get back up again fast, in other words, and ask our Lord to give you the grace to break any bad habits keeping you from Him.

The important lesson in trying to be more like Dismas instead of Gestas is for you to remember that God will not forsake you if you do not forsake Him. Don’t curse Him out like Gestas, turning your back rather than your face to Him! Stay close to Jesus in prayer, especially now in these turbulent times!

Approach our Lord with genuine sorrow for your sins, asking for His  help in making a sincere purpose of amendment, without resentment or bitterness over any trials and tribulations.

It is also worth noting here that while we do not have to believe that our blessed Mother’s prayers for the Good thief helped his conversion at Calvary, we should still be asking for her help and graces as well in combating sin and making it to heaven!!

Return from A Tale of Two Thieves
to Prayer Blog Page