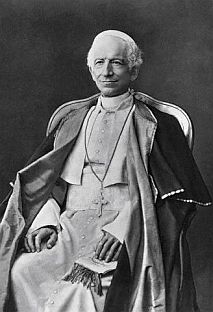 Can a prayer be inspired by a battle? Pope Leo XIII (pictured at right) wrote  the Saint Michael prayer, printed below, in 1884, after supposedly seeing a frightening vision: evil spirits, trying to fulfill Satan’s boast to destroy our Lord’s Church within a century, were engaging in fierce attacks against it.

Although the Pontiff also saw St. Michael casting Satan (also known as the devil) and his demons back into Hell in his vision, he was so horrified by what he had seen he felt compelled to help defend our faith in this struggle.

In the Saint Michael prayer he throws down the gauntlet to “the father of lies” as Jesus calls the devil in John’s Gospel (8:44), by enlisting the help of a very special Archangel:

Saint Michael the Archangel,
defend us in battle.
Be our protection against the wickedness and snares of the devil.
May God rebuke him, we humbly pray;
and do Thou, O Prince of the Heavenly Host,
by the Divine Power of God,
cast into hell Satan and all the evil spirits
who roam throughout the world seeking the ruin of souls. 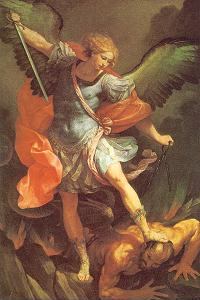 (Note: we also have added a page for the Litany of Saint Michael)

St. Michael makes a great general in this fight between Christ and Satan for our souls! After all, we read in Revelation (12:7-9) that “there was a great battle in heaven; Michael and his angels fought with the dragon...and that great dragon...who is called the devil and Satan, who seduces the whole world...was cast unto the earth, and his angels [the demons] were thrown down with him.”

St. Michael’s very name (in Hebrew, Micha’el meaning “Who is like unto God?”) denotes the war cry uttered in that battle. Note that when we talk about Satan or the devil here we are also referring to his “army” of fallen angels, the evil spirits referred to in the Saint Michael prayer.

As a special patron and protector of the Church, St. Michael has been assigned to fight against Satan; to protect faithful souls from him, especially at their death; to champion God’s people; and, further along this line, to escort them to their judgment.

Pope Leo XIII saw to it that the Saint Michael prayer was recited after every low Mass throughout the world. (The low Mass, discontinued in 1970 after Vatican II, was said by a priest alone, with no music.) This prayer is not said at Mass today, but in 1994 Pope John Paul II urged the faithful keep to reciting it.

Although we tend to downplay the notion of the devil as being too quaint or outmoded today, he does indeed exist and not just as a symbol of evil, or as character in a fairytale to frighten us.

We obviously can’t excuse all our sins and failures by saying, as the comedian Flip Wilson did in a line he made famous, “The devil made me do it!” After all, God allows us to be tempted but gives us the grace and the free will to choose Him and not the devil.

Still, we shouldn’t assume the devil is just some cartoon figure. Priests such as Father Malachi Martin and Father Gabriele Amorth have written extensively of their struggles with demons during exorcisms.

One of Satan’s greatest assets is his camouflage, the belief that he doesn’t exist, as Father Martin once noted in his acclaimed book Hostage to the Devil. Father Martin felt strongly that disbelief in Satan and the forces of evil leaves us unable to resist them.

On the subject of resistance, keep in mind that we can and should say the Saint Michael prayer at church or just on our own during the day for spiritual protection for ourselves and for others as well!

Satan was unable to destroy the Catholic Church in the 20th century, but certainly our faith withstood terrible onslaughts just from Hitler and Stalin alone. We are still engaged in that war that has gone for all of human history, in one form or another, between God and the devil.

Each of us has had our own battles against the dark side trying to turn us away from eternal life with our Creator. Satan’s idea for our eternal life is one spent with him in hatred and misery and he’s after as many souls as he can get!

As St. Peter once noted “be sober and watch, because your adversary the devil as a roaring lion, goes about seeking whom he may devour” (1 Peter 5:8). “The evil spirits who roam about the world seeking the ruin of souls” mentioned in the Saint Michael prayer have surely been busy, but in asking for help we can fight back against them every day.

Prayer and the sacraments are an essential part of what St. Paul called the “armor of God” in his letter to the Ephesians. The Saint Michael
prayer can help us indeed “stand against the deceits of the devil" (Eph 6:11) by “taking the shield of faith” (Eph 6:16). Remember, God permits us to be tempted by the devil but gives us the grace to resist him through prayer in our daily lives.

Let us not be afraid to ask for St. Michael’s help in this prayer and others like it. We need to remember that each time we pray we work to defeat our real enemies, not each other, but rather the devil and his evil spirits.

As St. Paul put it, we fight “not against flesh and blood but against principalities and power, against the rulers of the world of this darkness, against the spirits of wickedness” (Eph 6:12). With God’s help in prayer they can all be overcome.

Return from The Saint Michael Prayer
to Prayers to Saints