CHRISTMAS AND THE INCARNATION 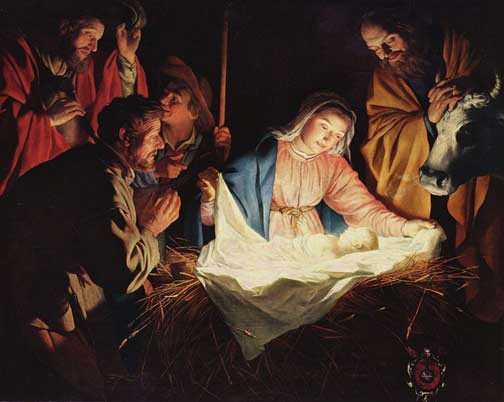 THIS WEBPAGE IS AVAIABLE
AS A PODCAST HERE

We live in a era where “Merry Christmas” has been replaced more and more by “Happy Holidays”. Yet, in this “most wonderful time of the year” when everyone gets understandably frazzled by all the “holiday” hullabaloo, it is importantfor us to find some quiet moments as we approach Christmas to remember exactly what we are celebrating in December.

It’s not “Merry Present Day” or (heaven forbid!) “Merry Black Friday” where people await not the coming of the Baby Jesus but rather some store’s opening so they can get that $100 Flatscreen TV. It’s not even “Merry Party Day” or “Merry Gratuity Day”.

Is it any wonder that so many people feel depressed or otherwise weary from the bombardment of ads encouraging us to buy, buy, buy stuff in the supposed spirit of the season?

We’re shown all sorts of happy people making happy memories that can all be ours when we pull out our credit cards! Look at that thoughtful husband who just surprised his wife with a new car for Christmas! Or a $2500 exercise bike!!

At a time when many of us are just trying to make ends meet, all this commercialism, however necessary it might be for businesses, can leave anyone feeling like a left-out loser!

So, how do you not fall into that trap? Think of the real significance of Christmas. Think about the little baby Jesus, who showed Sinful Fallen Humanity true humility and real love, one that it is selfless rather than selfish. It’s not something you can buy with money, power and prestige.

Let Jesus remind you of your worth in His eyes as a human being. Let Him free you from succumbing to that horrible deceptive snare of thinking you are what you own!

Each Advent and Christmas, we celebrate one of the most profound events in human history: the day God first appeared to us as one of us, as a little baby! He was born in a cave and died on a cross for our salvation. And he did that for each one of us, including me and you. And he would have done so even if you were the only person in the world. That thought can be comforting for those who feel overwhelmed these days!

Sadly, many of our fellow human beings deny that God became man to redeem us from our sins. They forget in dismissing the notion of His being born of the Blessed Virgin Mary that, as the angel Gabriel told her, “Nothing shall be impossible for God" (Luke 1:37).

Sometimes looking at all the wreckage and havoc all around us that our sins have caused, I find myself wondering: why on earth (literally!) would you want to become one of us, Dear Lord? What is there about us that you found so special?

Certainly Satan (also known as Lucifer before his fall) has never had any love for us! Scripture doesn’t give us much to go on about  Lucifer’s failed rebellion that caused us to be tainted by Original Sin, and filled with destructive concupiscence, when he seduced Adam and Eve into disobeying God (Gen 3:1-6) and humanity then lost Paradise.

We read in the book of Isaiah (Is 14:12-15) and in Chapter 12 of the book of Revelation about his fall from heaven (with Revelation mentioning that a third of the angels also fell with him).

And our Lord once mentions Satan’s falling like lightning from the sky (Luke 10:18). However, we can only guess as to what caused him to think he, a created creature, however beautiful, could be greater than God.

The celebrated Jesuit priest, exorcist and author Malachi Martin, once speculated that Satan’s rebellion might have been triggered by the thought that he, the most beautiful angel, would have to serve God as a human being, our Lord Jesus Christ, and no way was he, burning with pride, ever going to do that!

While this theory complements humanity as a whole, in showing God’s favor for those he made “a little lower than the angels” (Heb 2:7) it is  not to be taken as gospel.

One thing is certain, however: cast down to hell with a third of the angels who followed him in his rebellion, Lucifer, now Satan, burns with an eternal hatred for humanity; and he and his demonic cohort of fallen angels wish to drag as many souls into the misery of hell with him as they can!

Satan’s jealousy for us knows no bounds. He and those who followed him will never ever have the chance that we do to experience God’s awesome beauty and love in what is known as the beatific vision.

Those who think they can dabble in the occult, or that Satanism might be cool or somehow give them power and respect are literally playing with fire if they believe anything coming from the devil, whom Jesus called the father of lies (John 8:44)!

And if it was pride that caused Lucifer’s downfall in the first place, it is our humility that is meant to be a potent weapon against him. Think of the humble example Jesus set in His incarnation. He was born not in the great Second Temple in Jerusalem, or in some other noble setting; not even in an inn, but rather in a cave among animals in Bethlehem. With a manger for a crib!

While meditating on the Nativity we get a glimpse of the heavenly realm as well as the earthly, in the angels who announce to the shepherds our Lord’s birth. However, the key takeaway here is that while God is in charge of all things, he desired to share in our humanity in humility so that we might be able one day to share in His divinity, in heaven!

He wished us, in the example of His birth, life, and death, to follow His maxim that “whoever exalts himself shall be humbled and whoever humbles himself will be exalted (Matt 23;12)”. So many people think otherwise and make themselves and others miserable through various power trips.

Again, in the midst of all the chaos and confusion we see all around us from our fellow sinners, the Advent and Christmas season is an important time to reflect on how special he thought our humanity could be! Never forget He allowed Himself to be born in a cave and die on a cross for each one of us, and that includes you!

We Catholics, indeed all Christians, are called to imitate Christ. Yet He didn’t come to earth as a parrot, for us to just mouth words heard by others. Many of us, even among the faithful fall into the trap of reciting words and phrases mindlessly at Mass. I’ve often said the Nicene Creed on “auto-pilot” myself, for example.

Christ didn’t come as a pig, for us to roll around and wallow in our own mess in the slime of mortal sin and dissipation with other soiled souls. He didn’t come as bear or a wolf, or some other such predatory creature acting by instinct rather than intellect, born mainly to mate, eat, forage for resources, and fight.

And, in a time where we tend to make Gods and Devils out of political figures he certainly didn’t come down as an elephant (a Republican) or a Donkey (a Democrat) either!

So many among us want to celebrate our “animal instincts”, particularly when it comes to sexual matters. Yet “four legs good two legs bad” (with a hat tip to George Orwell’s classic Animal Farm) was not meant for us. Our Lord didn’t assume human flesh, having created us in His likeness and image for that!

He came as one of us, a human being, to be born and die for us to bring out our goodness, and to reflect His, in humility and service to others while keeping His Commandments.

Besides the angels announcing our Lord’s Birth to the Shepherds (Lk 2:10-11), the Gospels give us another sublime touch in the Three Kings  and their retinue arriving after the Nativity with presents of Gold, Frankincense and Myrrh for the Christ Child.

While showing us God as the King of both Shepherds and Kings alike, this account (Matt 2:1-12) provides a good thought for meditation: what can I bring the little baby Jesus this Christmas? What would he want from me? What would He want from us?

How about helping a neighbor who might be alone, or working in a soup kitchen, or contributing to a clothing drive? How about praying and fasting for your fellow sinners? How about praying the Rosary, an especially powerful prayer? (And the more rosaries you pray, the better!) Visiting our Lord in the Blessed Sacrament? Taking some time to educate yourself in reading more about our faith?

And this, especially: how about giving Christ your sins by confessing them in the Sacrament of Penance (Confession) that you may then be able to receive Him in Communion free from any mortal sins? We tend to think of Lent as a time for spiritual housecleaning but it doesn’t hurt to do this during Advent either!

Consider the following as a prayer to our Lord as we remember in a special way His incarnation at Christmas.

You, dear Lord Jesus Christ, the second person of the Trinity, present from Eternity before and after becoming a human being as the Word made Flesh (John 1:14), wish us to follow You and imitate You, not to think of ourselves as Gods but as God’s Children, to humbly serve and love others as we would ourselves!

The priests summon You down at Mass and serve in Your place in Confession. We are called to shine Your light and Your truth as part of Your mystical body, your Church.

Help me and everyone reading this, and everyone I pray for, to be not only human (as we often say when trying to explain or excuse something) but fully human in the way You’ve intended us to be (as citizens-in-training for heaven)! Give us your grace to stay close to You in striving to know and do Your Will in all things! Amen!

We at Our Catholic Prayers wish you all a Blessed Advent and Christmas season!

Return from Christmas and the Incarnation
to Prayer Blog Page