THE GLORY OF EASTER:
CHRIST'S RESURRECTION IS
NO APRIL FOOL'S JOKE 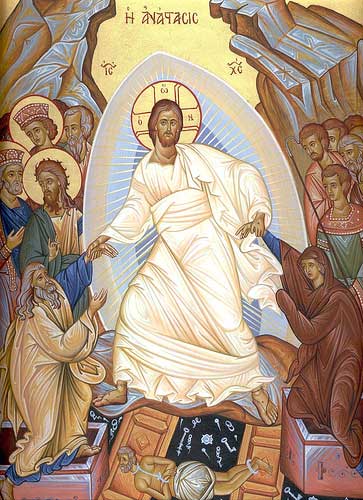 In an unusual twist on the Calendar, Easter fell on April 1st this year, April Fool’s Day. Yet the event we celebrated on this day is no April Fool’s joke. Easter is about more than bunnies, (real and chocolate), eggs, or bonnets. It commemorates one of the most extraordinary events in history: the Resurrection of our Lord Jesus Christ!

Numerous otherwise well-meaning people of other faiths, no faith, and even, sadly, some of our own faith, doubt this great miracle ever occurred. How could Jesus escape a tomb sealed with a heavy stone? How could He have risen? How could He be seen and present in His body after such a brutal death??

St. Paul faced skepticism about Christ's resurrection in his missionary journeys (such as in Acts 17:31-32), Stubborn doubts about Christ’s victory over death (Rom 6:9) have cropped time and again, like bad weeds, especially over the past few centuries.

It is intriguing how we human beings, with our inability to fully grasp God’s infinite wonder and miracles, put limits on His abilities based on our own comprehension of the world around us! Thomas Jefferson had a bible out of which he excised all the miracles.

A number of theologians and scholars in the 18th and 19th centuries also expressed great skepticism as to our Lord’s supernatural abilities. Even today some Catholics believe that Christ’s resurrection occurred only as a wonderful symbol of hope in the minds of His apostles and disciples.

During the time leading up to Easter, we often find TV specials focusing on one aspect or another of the “historical” (but..well…umm…maybe not Divine) Jesus.

These often include some new “finding” that somehow calls the Biblical account of Jesus’ Resurrection into question. Some of you may remember back in 2007 a look at “The Lost Tomb of Jesus” in a Discovery Channel special directed by James Cameron, of Titanic fame.

I remember another such program a few years back where some scholar was positively giddy over his notion that Jesus had somehow wound up in Spain, after the events recounted in the Gospels, with Mary Magdalene. (Dan Brown posited a similar theory in The Da Vinci Code that Jesus was just a regular human being married to Mary Magdalene, with children yet!)

And, let’s not forget author John Dominic Crossen who speculated in his book Jesus: a Revolutionary Biography that the reason that there were no remains of our Lord was that His body had been eaten by dogs!

This all ties in with the conflict between those for whom Jesus is just an historical figure, great teacher or philosopher, and those of us who see Jesus as the Son of God, with two natures, human and divine! The temptation to deny Christ's supernatural abilities is alive and well these days!

If Jesus is just another philosopher, we can take Him or leave Him as we please, or fashion him in our own image and likeness. There is a great line attributed to Mark Twain that “God created man in His image and man, being a gentleman, returned the favor!”

And yet, the Gospel readings during Mass right after Holy Week reflect on the surprise and joy that the disciples must have felt seeing our Lord very much alive and in the flesh, walking with them, talking, eating and even making them breakfast!

Still, the Apostle Thomas needed to put his hands into our Lord's wounds in his side to believe this (John 20:24-28). Jesus said to him directly afterwards “Blessed are those who do not see yet believe" (John 20:29).

I’ve often thought when hearing or reading this gospel passage that Thomas did us all a great favor by having Jesus prove his actual physical existence. Yet even today, as mentioned earlier, there are many doubting Thomases.

Besides St. Thomas' experience, Our Lord gave us, as St. Luke said, “many proofs” (Acts 1:3) that he was alive. After all, Christ didn't just show up once to one disciple, or perhaps just to His Blessed Mother, for maybe a few brief moments. Far from it!

St. Augustine lists the following 10 “distinct appearances of the Lord to different persons after His resurrection” all found in the Gospels in his treatise De Consensu Evangelistarum (On the Harmony of the Evangelists):

Note also that Sts. Peter (Acts 10:41), John (John 20:25), Luke (Acts 1:3, as mentioned earlier) and Paul (1 Cor 15:4-5) all refer to other appearances of our Lord before His Ascension into heaven! Don’t forget he walked among us for forty days between his Resurrection and his Ascension into Heaven!

Noted Catholic author and professor Peter Kreeft has written a valuable article here taken from his ﻿Handbook of Christian Apologetics detailing each of the erroneous theories that have emerged about what really might have happened to Jesus right after his death at Calvary. (It is also available as a video on You Tube here.)

He skillfully demolishes these four:

1) Jesus didn't die but rather swooned

2) Jesus' Resurrection was a conspiracy theory fabricated by the disciples

3) His Resurrection was all a hallucination; and finally:

The gist of Kreeft's refutation of all these theories is that there is simply too much evidence to the contrary! Here are some of Professor Kreeft's arguments:

2) On the Conspiracy Theory: Remember that, particularly in those first few decades after Our Lord’s death and Resurrection, Christians were not exactly welcome with open arms!

They faced persecution and even death from the Romans, for example, as when the Emperor Nero sought to make them the scapegoat for the great fire that engulfed Rome in 64 AD. However, none of them ever "broke" under torture with a confession that the Resurrection was a fabricated conspiracy tale. If it were, why become a Christian? To be persecuted for a fable?

Kreeft also notes that it would have been logistically impossible for the disciples to have stolen Jesus' body from a well guarded, well-sealed tomb.

In addition, if Jesus were indeed still there, the Jews who were vociferously opposed to any notion of our Lord being the Messiah, such as the high priests who clamored for His Crucifixion, could have easily produced His body. That never happened because there was no corpse to produce!

3) On the Hallucination Theory: As mentioned above in reference to St. Augustine, there were too many witnesses on too many separate occasions to Christ's presence among them, including 500 people at one time(!) (1 Cor 15:6) for Him to be a hallucination. And when do hallucinations eat food you give them (Luke 24:42) or cook breakfast for you (John 21:9), as touched upon earlier?

In conclusion, I would like to quote some touching words from St. Paul in his  first letter to the Corinthians "if Christ has not risen vain then is our preaching, vain too is your faith" (1 Cor 15:17). Or as my godmother once put it: “Without the Resurrection we all look like a bunch of schmucks!”

C.S. Lewis pointed out quite well in his book Mere Christianity that Jesus was never meant to be just some wise teacher or philosopher in the first place. All His claims to be the Son of God, (much less His predictions that He would one day rise from the dead) would have made Him a madman or a liar if this were the case!

So, Christ's Resurrection gives us great hope. There is a glorious afterlife, in fact a Glorious Eternity in Heaven awaiting us if we stay close to God!

The main point of this important chapter is that, thanks to Christ's rising from the dead, we too can rise from the dead at the Final Judgment with glorified incorruptible bodies to join with our immortal souls in heaven!

If we love Jesus and keep His commandments and die in a state of grace, free from any unrepented mortal sins. we may rest assured of an Eternity of love and peace with God and the Saints there!

And your body will be reunited with your soul in heaven, with no aches or pains, and some wonderful new abilities, such as being able to move at the speed of thought! No plains, trains, or buses or cars, (self-driving or not) needed!

When Jesus suddenly appeared or disappeared to his disciples in His physical body he gave us a taste of what can be ours someday if we pass away in a state of grace.

With the hope of the Resurrection and heaven, ask God for the strength and graces you need on your journey with our Lord, and for Him to help you with whatever "Spring Cleaning" you started during Lent!

Wishing you all a Blessed Easter season,