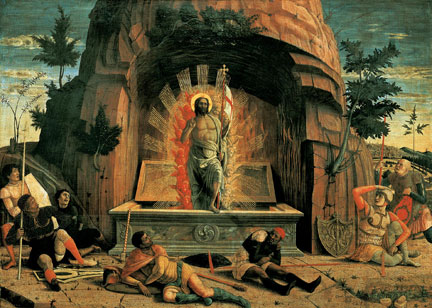 “Resurrexit Sic Ut Dixit!” (He has Risen as He said!) Easter is a wonderful time to reflect on a Gospel truth: Our Lord Jesus Christ did indeed rise from the dead for our salvation!

Coming out of Holy Week, and reflecting on the horrors and humiliation Our Lord took upon Himself for our salvation on Good Friday, Easter Sunday is a welcome relief emotionally. Jesus underwent scourging, the crowing with thorns, all the insults and calumnies, to say nothing of tremendous physical and emotional pain, all for us to have Eternal Life with Him!

And as dark as it seemed on that Good Friday afternoon, Satan didn't triumph after all. Thanks to the Word made flesh, evil doesn't get the last word!

This is a good time to remember that just as Easter is not just a Sunday, it’s a season. As such, when we’re done with the bonnets, the eggs and the special time with family, we have weeks to reflect on our Lord’s Victory over death and to be inspired to make it ours as well!

As St. Paul says in 1 Corinthians Chapter 15, thanks to Christ's Resurrection, "death is swallowed up. Oh death where is thy victory, oh death where is thy sting?"(1 Cor 15:54-55). The main point of this important chapter is that, thanks to Christ's rising from the dead, we too can and will rise from the dead at the Final Judgment with glorified incorruptible bodies to join with our immortal souls in heaven!

(Keep in mind, however, that as implied by the term "Judgment", consistent with scripture, there is also an Eternal Punishment in Hell awaiting those who die in a state of Mortal Sin. Those who are damned will feel only pain!)

(It is a good idea also to pray for the faithful departed who might be in Purgatory awaiting entry to Paradise as discussed here. We would want them to pray for us if that is our own “stop-over” as it very well may be for many of us!)

The Gospel readings during Mass right after Holy Week reflect on the surprise and joy that the disciples must have felt seeing our Lord very much alive and in the flesh, walking with them, talking, eating and even making them breakfast!

Still, the Apostle Thomas needed to put his hands into our Lord's wounds in his side to believe (John 20:24-28). Even today there are many doubting Thomases.

Every now and then we read of some scholar on the Internet or on a cable news program excitedly telling us of some newly-discovered tomb where Jesus was buried, perhaps with his "wife"(!?) Mary Magdalene. About 20 years ago, there was a well-known author named John Dominic Crossen who speculated that the reason that there were no remains of our Lord was that he had been eaten by dogs!

Even within our faith there are those who doubt the authenticity of this great miracle. A subtle form of attack on the fact of Christ's Resurrection, one that has found favor even in some theology departments, sadly, is to say that this event was somehow symbolic.

Still, as Jesus said to St. Thomas “Blessed are those who do not see yet believe”. Besides St. Thomas' experience, Our Lord gave us, as St. Luke said, “many proofs” (Acts 1:3) that he was alive.

After all, Christ didn't just show up once to one disciple, or perhaps just to His Blessed Mother, for maybe a few brief moments. Far from it!

Noted Catholic author and professor Peter Kreeft has written a valuable article here taken from his ﻿Handbook of Christian Apologetics detailing each of the theories that have emerged about what really might have happened to Jesus right after his death at Calvary. (It is also available as a video on You Tube here.)

He skillfully demolishes these four: 1) Jesus didn't die but rather swooned; 2) Jesus' Resurrection was a conspiracy theory fabricated by the disciples; 3) His Resurrection was all a hallucination; and finally 4) It was all just a myth. The gist of Kreeft's refutation of all these theories is that there is simply too much evidence to the contrary!  Here are some of Professor Kreeft's arguments:

2) On the Conspiracy Theory: Remember that, particularly in those first few decades after Our Lord’s death and Resurrection, Christians were not exactly welcome with open arms! They faced persecution and even death from the Romans, for example, as when the Emperor Nero sought to make them the scapegoat for the great fire that engulfed Rome in 64 AD. However, none of them ever "broke" under torture with a confession that the Resurrection was a fabricated conspiracy tale. If it were, why become a Christian? To be persecuted for a fable?

In conclusion, I would like to go back to some touching words from St. Paul in his letter to the Corinthians mentioned above,  "If the dead do not rise, neither has Christ risen; and if Christ has not risen vain then is our preaching, vain too is your faith"

So, Christ's resurrection gives us great hope in our own someday as well. There is a glorious afterlife, in fact a Glorious Eternity awaiting us if we stay close to God! The answer to the song "Is That [This life] All There Is?", is a resounding "No!"

With the hope of the Resurrection and heaven, ask God for the strength and graces you need to carry your daily crosses, especially now, and for Him to help you with whatever "Spring Cleaning" you started during Lent! Happy Easter!

Return from He Is Risen!
to Prayer Blog Page