A PRAYER TO THE
IMMACULATE HEART OF MARY 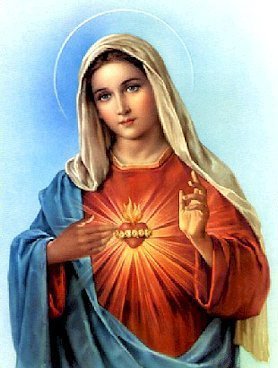 This prayer to the Immaculate Heart of Mary printed below has a special resonance in its reference to our Blessed Mother’s sad heart at Fatima in this centennial year of the famous apparitions of Our Lady of Fatima, described in part here and in some of the links listed below.

Immaculate Heart of Mary, my Mother, I come to you in childlike prayer. I earnestly desire that all the people of the world may be brought back to the humble knowledge and love of the Sacred Heart of your dear Son. I pray, dear Mother of my God, that the wonderful beauty and purity of your own Immaculate Heart may so win our souls that we may detest all sin and dedicate our lives to the honor and glory of the God who created us.

You revealed the secrets of your own sad heart at Fatima and begged for penance, prayer, and conversion of the world to God. What more can I do than unite my heart to yours in this great yearning? What can I add but the fervent prayer that all the world may listen to your pleading?

I give my heart to you, my heavenly Queen, and in confidence I leave to you what is best for me in answer to my prayer for love and reparation.

Immaculate Heart of the Mother of my God, I implore through your powerful intercession, the conversion of the hearts of men, complete victory over sin, and the return of the peace which you have promised. Amen

Speaking of “childlike prayer”, to sum up very briefly, our Blessed Mother appeared on six different occasions to three shepherd children, Lucia dos Santos, age 10, and her cousins  Francisco Marto, 7 and his sister Jacinta, 6, in the village of Fatima in Portugal in 1917. (The Church approved the Fatima apparitions as worthy of belief in 1930.)

She requested prayers and penances for the only true peace broken humanity has yet to achieve, the peace of her Divine Son, Jesus Christ.

Our Lady of Fatima came at an opportune time, with good reason for a “sad heart”! A suicidal World War in Europe that was supposed to be “over by Christmas” in 1914 was dragging on with its carnage and body count.

Various nations (including Portugal that year, and Mexico in the 1920’s) were infected with a deeply anti-clerical mindset in which devotion to our Lord and His church was discouraged if not eliminated! And Vladimir Lenin was on his way to Russia to bring about the atheistic Bolshevik Revolution in October of that year.

(The Blessed Mother predicted in the third apparition to the children on July 13th, 1917, as noted below, that Russia would spread her “errors”. And indeed that tragic revolution laid the foundation for Communism to create much misery and death not just for Russia but for many other countries around the world for a century to come!)

In her final apparition on October 13th, a great event, the Miracle of the Sun, occurred, described in more detail here. Over 70,000 people witnessed the sun spin around, sending forth all sorts of brilliant colors, before hurling down towards all these amazed and then terrified people and then returning back to normal in the sky! Even the secular press in Portugal had to take notice of this extraordinary occurrence!

Previously, on July 13th, the three children were asked to warn people, among other things, that if they did not stop offending God by their wicked conduct, another more terrible war would break out less than a generation later, as indeed happened with World War II in 1939.

As she said: "The war [World War I] is going to end; but if people do not cease offending God, a worse one will break out during the reign of Pius XI.

”When you see a night illuminated by an unknown light, know that this is the great sign given you by God that He is about to punish the world for its crimes, by means of war, famine, and persecutions against the Church and the Holy Father. [Note: there was a great Aurora Borealis that raced through the sky like a big red fireball and was seen throughout Europe on January 30, 1938!] To prevent this, I shall come to ask for the consecration of Russia to My Immaculate Heart, and the Communion of Reparation on the First Saturdays.

”If My requests are heeded, Russia will be converted, and there will be peace; if not, she will spread her errors throughout the world, causing wars and persecutions of the Church. The good will be martyred, the Holy Father will have much to suffer, various nations will be annihilated.

”In the end, My Immaculate Heart will triumph. The Holy Father will consecrate Russia to Me, and she will be converted, and a period of peace will be granted to the world. In Portugal, the dogma of the Faith will always be preserved ... “

Lucia Dos Santos published this message in her Memoirs in the 1940’s when she was Sister Lucy. (Francisco and Jacinta passed away from influenza in 1919 and 1920 respectively.)

There were some additional warnings, now known as the Third Secret of Fatima, as they were not published by Sister Lucy in her memoirs. These were the subject of much speculation for decades before the Vatican released the text of the Third Secret in June of 2000. There is some dispute about whether or not it was fully revealed, however.

The version released in 2000 spoke of chastisement of a Bishop dressed in white, presumably the Holy Father, being massacred along with other bishops, priests, and various other religious and laity, by a group of soldiers on a mountain after his having passed through what was presumably a ravaged city.

However, the late Malachi Martin, the noted Jesuit priest, author, and exorcist, spoke of having read the third secret in the 1960’s, in radio interviews in the 1990’s. Although he was sworn to secrecy, he nonetheless suggested that it mentioned a Divine Chastisement so terrifying that if it were known would fill churches and confessionals!

Indeed, Pope Benedict XVI, when he was Cardinal Ratzinger, once said that the Third Secret was essentially the same as the message from Our Lady of Akita, given by her to a Japanese Nun, Sister Agnes Sasagawa, in 1973.

Mary spoke then of fire falling from the sky that would wipe out a great part of humanity if men did not repent and better themselves. Our Lady of Akita also warned of great divisions coming in the Church with "cardinals opposing cardinals and bishops against other bishops".

The Italian journalist and author Antonio Socci has theorized along these lines, that the Third Secret foretold a great apostasy coming from within a divided Catholic Church.

Whether or not this apostasy has actually happened is a subject for debate these days, and it is not within my purview to discuss the Third Secret in more detail here. The links below can provide more insight about the controversy.

It is worth noting nonetheless that, for whatever reason, in addition to the horrible scandals involving pedophilia and the priesthood, there has been a marked turning away from the Catholic faith in the West. This has been brought about in part by poorly formed priests and laity as described in part here.

Belief in the wonderful supernatural elements of Catholicism has been downplayed in many parishes over the past 50 years. A large number of Catholics no longer believe in the real presence of Jesus in the Eucharist, much less in Angels, Demons, Sin, and the Four Last Things: Death, Judgment, Heaven and Hell.

Jesus has gone from being the Word made flesh as the Son of God, to being the Golden Rule Guy, or perhaps a Social Justice Warrior of sorts for many. And, despite the fact that our Lady of Fatima showed the three children a terrifying glimpse of souls burning in hell surrounded by demons in the Third Apparition, the prevailing wisdom nowadays is that everyone goes to heaven.

Such thinking leads to societal chaos as Man makes God in his image rather than the other way around, with all sorts of grave sins being no big deal after all.

Rosaries, devotions, adoration of the Blessed Sacrament, homilies on taking sin and God’s justice as well as His mercy seriously to avoid the perils of Hell..well.. that’s all so medieval for many clergymen and parishioners alike. It’s the 21st Century! Get with the times!

Yet our Lord’s message is timeless. It doesn’t have to conform to the shifting, or one might even say, collapsing mores of our day. And our Blessed Mother stands always ready to help her Divine Son with dispensing His much needed graces through prayers, especially the Rosary.

It is important to remind our non-Catholic Christian friends that we do not worship Mary in our prayers, but rather we honor her. Although she had a low profile in the Gospels, she nonetheless played a crucial role in our salvation in assenting to being Jesus’ mother and allowing the Word to be made flesh (John 1:14) in her womb. Our Blessed Mother’s last recorded words in the Gospels, at the wedding feast at Cana when she told the headwaiters to follow Jesus’ instructions, could very well function as her creed: “Do whatever he tells you” (John 2:5).

Speaking of controversy, as mentioned earlier, it is also worth noting, that the late Father Nicolas Gruner’s organization, the Fatima Center, feels the Consecration of Russia to the Immaculate Heart of Mary has not been done properly, although the prevailing view among religious and laity is that it was done by Pope John Paul II in 1984.

The storm clouds currently on the horizon give one pause, however. Again, I’ve listed some links below for information rather than going into the weeds about it here.

In these harrowing times, with much saber rattling going on as nations test missiles and deploy troops in anticipation of a possibly devastating conflict, Mary’s warnings about the possible annihilation of nations given in the third apparition seem ominously prescient these days. World War III seems to be lurking around the corner, stalking humanity and looking to start perhaps in Korea, Syria, or even Europe!

We must pray now more than ever that nuclear devastation and/or an economic or societal collapse can be averted. (These could occur possibly from a massive debt crisis; or perhaps from a nuclear war or a cyber attack that takes down America’s power grid, leaving much of this nation with no electricity.)

But if not, pray that our Lord and our Lady can give us all the much needed graces to endure whatever hardships we might face. And that if we do perish from some man-made calamity, we might nonetheless achieve salvation by having stayed close to Christ in loving obedience to His church and her sacraments.

Now more than ever we must say “Our Lady of Fatima, pray for us” and add our prayers such as these Fatima Prayers and these as well to hers! And by following our Lady’s urgent advice to pray the rosary. Pray it on a daily basis, as often as you can!

SOME GOOD LINKS FOR MORE INFORMATION ABOUT FATIMA

The Our Catholic Prayers Page
on Fatima Prayers

The World Apostolate of Fatima

LINKS ABOUT THE THIRD SECRET OF FATIMA

The Official Vatican Page from 2000

LINKS ABOUT THE CONSECRATION OF RUSSIA

Taylor Marshall on the Differing Arguments on the Consecration

EWTN on the Consecration

Church Militant Page on the Consecration

Gabriel Amorth on the Consecration

Christopher Ferrara on the Consecration