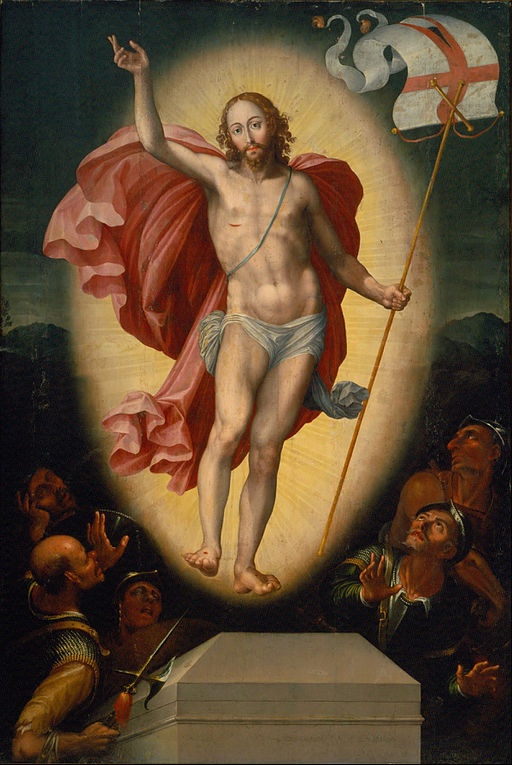 The Easter season provides a respite of sorts from the mournful reflections in Lent on our Lord's Passion and Death that preceded His Glorious Resurrection. Especially during these difficult times it is all too easy, and quite natural, to see our church undergoing a kind of Passion with Covid closings and lockdowns still occurring in disparate places around the world. Society itself is becoming difficult for believers trying to avoid a cancel culture that is becoming increasingly hostile to Christianity.

Yet in the midst of the gloom and uncertainty, pausing to reflect on Our Lord’s Resurrection can give us great hope. There are two points worth noting regarding the Resurrection, the first about its authenticity and the second about the abilities we may have one day as citizens of heaven, God Willing!

Christ’s rising from the dead wondrously reaffirmed for His astonished disciples His conquest over death as foretold in Scripture. Remember as well that this victory can be ours as well when we pass from this life in a state of Sanctifying Grace to receive glorified bodies at the “Resurrection of the Dead and the Life of the World to Come”, as we say in the Nicene Creed, with supernatural abilities such as those Jesus displayed on that first Easter Sunday.

As St. Ambrose once wrote “By convincing us of his own Resurrection, he [Christ] likewise assures us of the physical nature of our own Resurrection on the Last Day.” He also wondrously reaffirmed His Divinity in His Resurrection, that He was not just a “prophet mighty in deed” (Luke 24:19) as the disciples on the Road to Emmaus referred to Him.

Before we get to the nature of our Resurrection, I’d like to take a few moments to go over some intriguing aspects of Jesus’ Resurrection we see in Scripture.

Let’s first reflect on Jesus’ actions after rising from the dead: He’s eating and cooking fish, he’s suddenly showing up in a room behind closed doors, and even just disappearing in front of astonished disciples after having broken bread with them! Amazing is it not! It is the Lord, He’s alive! Resurrexit Sicut Dixit, ("He has risen as He said") indeed!!  And he’s not a ghost. Ghosts don’t eat!

Regrettably over the past few decades some religious instructors have advanced the spurious notion that the apostles and disciples didn’t actually see our Lord after His death and spend time with Him, no sir. They just shared fond memories of Him based on their imaginations!

Never mind that our Lord appeared no fewer than 10 times to various people mentioned in Scripture alone, to the disciples, to Peter, to Mary Magdalene, and to as many as 500 people at one time, just as a refresher for the actual facts! (St. Luke himself refers to "many proofs" of His Resurrection (Acts 1:3))

St. Paul himself noted some of these appearances, as well as that of Jesus to himself of course in 1 Cor 15:5-8. He further stressed the factual importance of Christ’s Resurrection a few lines later when he wrote “Now if Christ is preached as raised from the dead, how can some of you say that there is no resurrection of the dead? But if there is no resurrection of the dead, then Christ has not been raised; if Christ has not been raised, then our preaching is in vain and your faith is in vain” (1Cor 15:12-14).

In addition, thankfully, we must remember that one Apostle, Thomas, inadvertently gave a great example of tangible proof as to our Lord’s being present in an actual body, not just as some spirit after His Resurrection!

His reaction to the news of Jesus’ having risen from the dead has given rise itself to the unfortunate moniker “doubting Thomas” applied to people who refuse to believe in something without seeing actual concrete evidence.

As a quick recap, Thomas wasn’t present when Jesus appeared to the dumbstruck yet delighted apostles that first Easter Sunday evening. No excited or flabbergasted account was going to be enough for him, no way! He even went so far as to say "Unless I see in his hands the print of the nails, and place my finger in the mark of the nails, and place my hand in his side, I will not believe" (John 20:25).

So, of course, eight days later, our Lord obliged Thomas in as convincing a manner as one could ever imagine. He not only showed up again with the disciples a week later when the Apostle was there. He went further as to actually take Thomas' hands and place it in just those places our famous skeptic had sounded off as requirements for him to believe that this was actually the Resurrected Jesus!

Thomas’ response has been echoed quietly by the faithful at Masses over years at the elevation of our Lord in the Eucharist “My Lord and My God” (John 20:28).

While one might think of Thomas as acting like a pompous jerk in this instance beforehand I’ve often thought he did us all a favor in further reaffirming as fact Jesus’ Resurrection in body, not just as some phantasm.

Think also of that great line in Jesus’ famous reproach to Thomas “Blessed are they who have not seen and believe” (John 20:29). That includes me and you and all the me and you’s throughout the almost two millennia since our Lord's Resurrection.

Yet Christ no doubt in His great love and mercy has allowed us to poke His side and hands figuratively speaking. We have only to consider the doctrine of Transubstantiation as a wondrous reminder that if our Lord could be really present to the disciples after His Resurrection, so can He be really present in a different manner to us today, under the appearance of bread and wine in the Eucharist at Mass!

You might well ask, as did many when our Lord first made known that his flesh was true food and His blood true drink in the 6th chapter of John’s gospel during His earthly ministry “How can this man give us his flesh to eat”? Is this real? Absolutely.

Blessed Carlo Acutis, a young man who died from leukemia in 2006, gave us an extensive catalogue of what can only be described as Eucharistic miracles including many in which blood emanated from various hosts for Mass on its own, among other wondrous supernatural phenomena in which Jesus reminded us all that He wasn’t just some worldly philosopher or prophet! The webpage for this compendium includes some 151 such accounts from all over the world spanning just about the past 20 centuries!

I would also like to mention here another good resource: Catholic author Joan Carroll Cruz wrote a number of great readable accounts of various incidents that further affirm Christ’s Divinity in a world more and more ready to dismiss anything supernatural about our faith.

These are published by Tan Books and include studies of the supernatural aspects of Christ, His Church and His saints with titles such as Angels and Devils, Eucharistic Miracles, Relics, and Mysteries, Marvels and Miracles in the Lives of the Saints. These books are listed here, and no, I’m not getting a commission for this!

One of these books, The Incorruptibles, chronicles those saints such as St. Bernadette Soubirous whose bodies have remained miraculously intact after death, rather than undergoing decomposition as we all normally do when passing from this life!

This brings us to the second point about His Resurrection I mentioned earlier. Our God of great miracles can and will restore our bodies at His Second Coming, regardless of their condition. For the faithful who passed away in a state of Sanctifying grace with no mortal sins these bodies will be glorious indeed!

But let me give the bad news before we get to more good news: We should never assume our salvation after all. Those souls who have died in a state that lands them in hell will stay damned forever with bodies joining their souls in a state of unimaginable pain and suffering in wretched darkness.

This is a good warning for us to strive to stay in as much of that state of grace as possible and not deliberately commit mortal sins so that we can  merit the good news instead! And salvation brings much good news indeed, both for your soul after death and then for your body as well upon our Lord’s Second Coming one day!

I’ve used the acronym BIAS to remember what God has in store then for those who love Him: (This bias is actually a good one!)  Aches and pains? Gone! Problems with weight or disease? Gone!

Your Glorified body reunited to your soul will have four quite wondrous qualities : These are Brilliance (in that it will shine like the sun); Impassibility (in that you will have no pain or suffering whatsoever!) Agility (Imagine being able to move at the speed of thought! No need for cars, trains, planes, or whatever else to go anywhere!) and finally Subtlety (as in being able to move through what to us are enclosures such as walls and locked doors, for examples.)

Jesus certainly gave us all a taste of the powers of a resurrected body in subtlety (meeting the disciples even though they were behind closed doors) (John 20:19) and perhaps Agility as well, when He suddenly vanished after breaking bread with the disciples on the road to Emmaus (Luke 24:31).

All this sounds great doesn’t it? It certainly gives one hope in the long run. As St. Paul put it so well in his letter to the Philippians “We await a Savior, the Lord Jesus Christ, who will change our lowly body to be like his glorious body, by the power which enables him even to subject all things to himself (Phil 3:19-20).

If this seems far fetched, remember again as always that with God all things are possible (Matt 19:26)! Think of some of His great Gospel miracles: Re-attaching someone’s ear with a touch? Healing a servant with just a thought? Thinking water into wine? Calming the wind and the waves with a quick sharp rebuke? All of this is no problem for God!  That's why He’s God and we’re not! Yet one thing he can’t do is to change stony hearts into loving ones without our consent!

So try to persevere in the midst of suffering and anxieties as best you can and offer up your troubles to Jesus to help yourself and fellow sinners achieve salvation as well. And, as always keep your eyes on the prize so that, as St. John (John 20:31) said “that you may believe that Jesus is the Christ, the Son of God, and that believing you may have life in his name.”