The Transfiguration of the Lord and Hiroshima: A Tale of Two Miracles 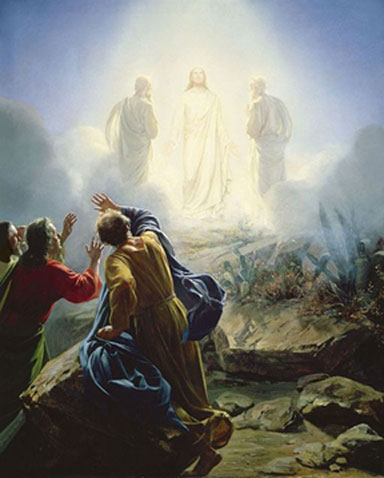 On August 6th we marked an important feast in the Catholic Liturgical Calendar, the Feast of the Transfiguration. It commemorates an awe-inspiring incident, in which Christ showed himself in radiant glory as he and the apostles Peter, James, and John ascended Mount Tabor, as depicted in this painting above. This event is mentioned in three of the four gospels (Matthew 17:1-10, Mark 9:1-10, and Luke 9:28-36) and a letter from St. Peter as well.

For those of you who might be unfamiliar with the details of the Transfiguration, a brief account may be useful. It provides important details about Jesus’ Divinity as the Son of God, a fact sadly disputed by members of other faiths such as Islam, as well as by those having no particular faith at all.

The three apostles were ascending Mount Tabor with Jesus as His garments suddenly became shining, whiter than snow. They must have felt dumbstruck when He then started conversing with two towering Old Testament figures. Moses and Elijah, as shown above!

God the Father then spoke from a cloud that cast a shadow over them with this great testimonial (and advice!) “This is my beloved Son, with whom I am well pleased; listen to him” (Matt 17:5).

We read in all three Gospels referred to above that they definitely felt fear at that point. That's not hard to imagine, given they were probably somewhat flabbergasted to begin with! After this, they saw Jesus alone, who touched them as they lay prostrate according to the account in Matthew's gospel, telling them "Arise, and do not be afraid" (Matt 17:7).

This event impressed Peter enough for him to mention it in one of his New Testament letters years later. He said that what he and the other two apostles witnessed that day was indeed a miracle from God, one that, yes indeed, actually occurred. No fooling!

As he put it “we were not following fictitious tales when we made known to you the power and coming of our Lord Jesus Christ, but we had been eyewitnesses of His grandeur [Italics added]. For He received from God the Father honor and glory, when from out of the majestic glory a voice came down to him, saying ‘This is my beloved Son in whom I am well pleased’ And this voice we ourselves heard borne from heaven when we were with Him on the holy mount” (2 Pet 16-18).

Ironically, this feast day falls on the anniversary of the dropping of the first atomic bomb on the city of Hiroshima on August 6th 1945. That event, as well as the subsequent nuclear attack on the city of Nagasaki three days later, brought World War II, one of the most brutal wars in history, to an end.

Yet the blinding flash of light at the bomb’s detonation cast an ominous shadow upon the whole world: the threat of a Third World War fought with nuclear weapons that could wipe out much of humanity and much of life on this planet!

All in all, according to the U.S. Department Energy in this link at Hiroshima “some 70,000 people probably died as a result of initial blast, heat, and radiation effects… By the end of 1945, because of the lingering effects of radioactive fallout and other after effects, the Hiroshima death toll was probably over 100,000.  The five-year death total may have reached or even exceeded 200,000, as cancer and other long-term effects took hold.”

The causality figures from the Nagasaki bombing three days later were similarly horrific: an estimated 40,000 people dead initially with 60,000 more injured. Another 30,000 died within 6 months and over 100,000 more within 5 years after the blast!

So we see here two different displays of dazzling light, one exuding hope and promise, and another death and devastation. In the first instance, we see our Lord showing His glory while speaking with Moses and Elijah about His coming Passion for our redemption.

The second was followed by a destructive force so strong as to inspire President John F. Kennedy’s memorable remark at the United Nations some 16 years later that “mankind must put an end to war or war will put an end to mankind”. Or, as Albert Einstein put it, after World War III, World War IV would be fought with sticks and stones.

And yet there was another lesser known, but still quite profound, miracle that took place on that day set aside for the Feast of the Transfiguration, in 1945.

We read in the Old Testament of an extraordinary event where three brave men, Shadrach, Meshach, and Abednego, walked into and emerged from a fiery furnace unscathed rather than pay homage to a golden statue commissioned by the man who laid waste to Jerusalem and drove the Jews into exile in 587 BC, the Babylonian King Nebuchadnezzar.

So impressed was the King afterwards that he exclaimed upon seeing them emerge with a fourth man from the inferno that he said “Blessed is their God, the God of Shadrach, Meshach, and Abednego, who sent his angel and rescued his servants who believed in him. And they altered the verdict of the king, and they delivered up their bodies, so that they would not serve or adore any god except their God” (Daniel 3:95).

Our God is truly one of miracles. As Jesus Himself said, "with God, all things are possible" (Matt 19:26). Thus, it is worth noting, as chronicled in more detail in these two YouTube videos below and this link, a similar “Shadrach, Meshach, and Abednego” moment that occurred on that dreadful August morning in Japan in 1945.

Eight Jesuit priests lived in a presbytery about less than a mile away from Ground Zero of the nuke’s explosion. Yet, while everything around them was destroyed, and thousands were killed or otherwise wounded from this catastrophe, as mentioned earlier, they survived with only minor injuries!

Father Hubert Schiffer, one of the priests, stated later that he felt that they had survived because, as he put it, “we were living the message of Fatima. We lived and prayed the Rosary daily in that home.” (It is worth nothing here the the Blessed Mother appeared at Fatima, Portugal in 1917 in several apparitions followed by what we know as the Miracle of the Sun as described in part here. She encouraged, among other things, devotion to the Rosary for world peace.)

Fr. Schiffer also thought that they had been “under the special protection of God”. Clearly he and his fellow clergy experienced extraordinary divine protection being under our Lady’s mantle in their devotion to the Rosary!

As mentioned earlier, the threat of nuclear war has been with us since 1945 ebbing and flowing in its presence. Yet now, especially with all the saber rattling going on, most ominously with North Korea, we are living through an especially threatening time these days!

And while living a life of loving obedience to God in prayer and partaking of the sacraments and devotions such as the Rosary, cannot by any means guarantee any of us such a miraculous survival in this world should nuclear chaos be unleashed anytime in the years to come, we nonetheless must have faith that living such a life will allow us to have Eternal Life with God in heaven, where there will be war no more. Then if we may pass away in this life, our souls will not perish in hell in the next!

In the meantime, pray in these tumultuous dangerous times that God may grant us another miracle of somehow calming sinful humanity’s stormy seas must as He did in the boat with His disciples (Matt 8: 23-27; Mark 4:35-41) and helping us to prevent a catastrophic global war, economic collapse, or a “hostile takeover” by forces most inimical to Christ and His Church.

And in this centennial year of another great Miracle, the miracle of the Sun at Fatima Portugal described here, pray to our Blessed Mother for her help and intercession with her Divine Son as well! Our Lady of Fatima, pray for us!


HELP SUPPORT OUR WEBSITE WITH PURCHASES
FROM OUR BOOK AND GIFT STORE
OR CAFE PRESS STORE!