SOME THOUGHTS ABOUT
JESUS' ASCENSION INTO HEAVEN 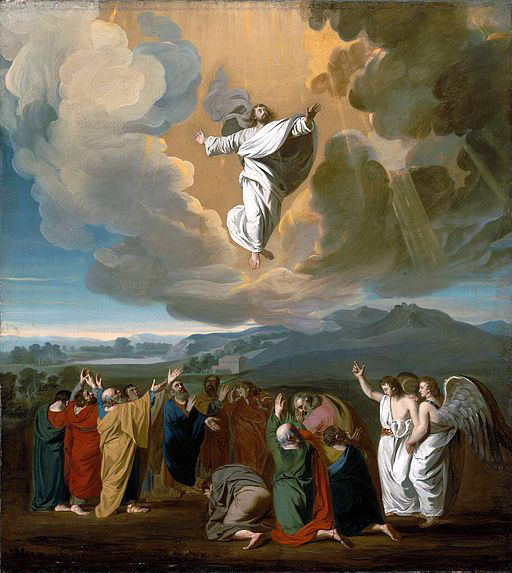 We also have a seperate
Ascension Day Prayer page
on our site here as well!

I remember a while back hearing an Ascension Day homily where the priest summed up the message of this special day in one word “Go”! In the book of Acts, attributed to Saint Luke, Jesus offers words of hope to His Apostles, along with a challenging call for them to go forth to be missionary witnesses to the Gospel throughout the world.

The hope comes from His telling His apostles that “in a few days you will be baptized with the Holy Spirit” (Acts 1:6). After all, hadn’t our Lord told them He would not leave them orphans at the Last Supper (John 14:18)? That His Father would send them the Holy Spirit to teach them all things and to remind them of what He had told them during His earthly ministry (John 14:26)?

That is in no small part why we refer to Apostolic tradition in discussing church teachings; that is to say, the wheat of what was genuinely handed down to them versus the chaff of bogus beliefs, what both Sts. Peter (2 Pet 2:1-22) and Paul (2 Tim 4:3-4) warned to guard against.

(Not coincidentally but quite sadly, we struggle with this even to this day, about what to take as Gospel truth even in the Gospels themselves! It is not helped by the fact we have numerous Christian denominations around the world, as opposed to there being one Holy, Catholic and Apostolic church as our Lord wished!)

As mentioned earlier, the challenge in this Scriptural passage comes when Jesus tells them that once they have been baptized by the Holy Spirit, they will be His witnesses “in Jerusalem, throughout Judea and Samaria, and to the ends of the earth” (Acts 1:8).

This resonates with what we know as Christ’s Great Commission to evangelize the world, not just Jerusalem or even just Israel through His teachings. We read about this Great Commission at the end of both Matthew's and Mark’s Gospels.

Jesus’ words come in response to the apostles’ question: “Lord, will you at this time restore the kingdom to Israel” (Acts 1:6)? I once heard a priest make an amusing comment that Jesus might have struck His sacred head with His hand in exasperation at that point as if to say “It’s not about restoring the kingdom to Israel, you geniuses! You still don’t get it? We’re talking about something much bigger here!”

As we read in some excellent commentary on the subject of Christ’s New Kingdom from the Ignatius Study Bible “The focal point of this new kingdom is no longer a palace in Jerusalem but a throne standing next to the Father, high above in the heavenly Jerusalem. The unity of this kingdom is no longer held together by citizenship and taxes but by the Holy Spirit, who draws believers into one body through the sacraments. The royal ministers of this kingdom are no longer administrators and politicians but apostles and prophets. The borders of this kingdom are no longer extended by military campaigns but by missionary outreach”.

Our Lord also noted in response to the question as to when the kingdom would be restored that we should not waste time trying to guess about such things but rather to help spread the good news of his message of salvation through His church.

As he put it "It is not for you to know times or seasons which the Father has fixed by his own authority” (Acts 1:7). (This resonates with a more famous line in Mark’s Gospel (13:32) that no one knows the day or the hour of Christ’s Second Coming but our Heavenly Father.)

This is especially important to keep in mind during these trying times of rampant paganism, clerical apostasy, and a worldwide pandemic, as we all try to read the tea leaves wondering if this era is one of those birth pangs of tribulation leading up to the End Times that Jesus spoke of (Matt 24:8).

Going back to Christ’s command for the apostles to be witnesses “to the ends of the earth” this is quite in keeping with our calling His church Catholic, which is to say universal. This term itself first came into use by St. Ignatius, Bishop of Antioch, who wrote some quite moving letters to various congregations before he was martyred early in the Second Century AD.

Speaking of being martyred the term martyr doesn’t just refer to someone who has given up his or her life for our Lord and our Faith. The word, intriguingly, has an early Christian derivation from the Greek word for witness, martys! It is worth noting here that there are two types of martyrdom, Red, in which one loses one’s life (hence the red related to blood)  and White, where one can lose family, friends, or even one’s reputation in showing belief in our Faith.

These days, In addition to the many heartbreaking examples of Red Martyrdom in such places as Africa and the Middle East, many Catholics and non-Catholic Christians alike have experienced this White Martyrdom, with so much either outright hostility or indifference directed at Christianity in various ways, especially, ironically enough, under the guise of protecting religious freedom, from those who would rather see freedom from religion rather than of religion.

Yet as the author of the letter to the Hebrews, traditionally attributed to St. Paul (although this has come into question), in chiding his readers somewhat, wrote “you have not yet resisted to the point of shedding blood” (Heb 12:4).

This is not meant as a knock on any of us today per se. Rather, this is meant as a reminder that our Lord meant us to spread the Good News of His message of love and salvation and not hide it as if it were a light under a bushel basket (Matt 5:15), not worrying so much about whatever costs this might entail.

(Hiding a lamp under a basket I don’t know, sounds like that might be a fire hazard in any case, just saying…)

Granted we all can’t preach from soapboxes. We are meant to go boldly and prayerfully to the guillotine like the Carmelite nuns during the French revolution; or the firing squad, as Miguel Pro did in defiance of the anti-clerical Mexican government in the 1920’s.

Yet, Jesus warned His apostles in the Last Supper that the world would hate them as they hated Him (John 15:18-19), and indeed they all were killed while spreading the faith, except for St. John who was exiled to the island of Patmos after what tradition holds was a failed attempt to execute him a few years earlier, towards the end of the First Century AD.

Since our Lord’s Ascension we’ve seen ebbs and flows in acceptance and persecution of the church, all underlying the uneasy relationship sinful fallen humanity has had with Christianity, sadly, even to this day!

However, the Great Commission Jesus gave the Apostles mentioned earlier and reiterated in the Ascension reading, wasn’t meant to be the Good Suggestion. So often, especially now, our faith gets distorted or diluted by both secular society and sadly, as we’ve seen over the past few decades, by Modernist-minded clergy as well, seeking to make the church fit in with the world at large. It’s as if they all say “We’ll take the church on our terms if we take it at all, thank you very much!”

For examples of this, think of China even before this Coronavirus mess, bulldozing churches and replacing pictures of Jesus with that of the Communist dictator-for-life Xi Jinping.

Or Napoleon, as he approached the apex of his power imprisoning pope Pius VII when the church would not accede to his wishes. And, of course, we can't forget Hitler, Stalin, Mao, and other infamous members of the pagan rogues gallery, who caused all kinds of havoc at the cost of millions of lives last century!

So then, how can we spread the good news of the Gospel message in the face of so much resistance? St. Peter wrote concerning defending the faith, what we call today Apologetics, that we should be ready to give a reason for the hope that is in us from our belief (1 Pet 3:15), that is to say for the comfort and joy that that hope can bring.

While there is a lot of junk on the internet and in digital media in general, you can also find great nourishment and that reason that St. Peter spoke of, in sites such as Catholic Answers, Catholic Spiritual Direction and EWTN’s Apologetics page as well as that on the Catechism of the Catholic Church.

We also have a section on our site entitled Catholic Beliefs, a collection of some informative tracts from Catholic Answers. Don’t feel intimidated by the wealth of good solid resources out there. Read, study and learn at your own pace a little at a time, but keep at it!

Cultivate a personal relationship with our Lord and ask His mother and whatever saints you feel drawn to, and of course, the Holy Spirit, to help you advance in sanctity, with humility. And show Christ to others in how you live and act and love. My wife often quotes these haunting words attributed to Mahatma Gandhi “Your Christians are so unlike your Christ” Don’t be one of those!

Pray, fast, and educate yourself, and hopefully others, about the goodness and beauty of our faith, as well as how the crosses we face are meant to bring out some good, or at least expiation for sinful humanity.

And remind others that our faith can help them deal with those trials and tribulations; how Jesus wishes to give us His graces to help us cope; and how with love we can endure hard times; and that they can even be of great benefit to others when offered up to our Lord on the cross in atonement for sins. What is this we say nowadays? We’re all in this together.

While of course you may naturally seek to alleviate hardships, especially when they involve the health and safety of you and your loved ones, those sufferings that you can’t avoid, when offered up, can have great benefits for souls, those loved ones, or perhaps people you don’t even know!

Likewise, fasting and other such voluntary penances can have great value and can help you in your own struggle against sins in taming the unruly child lurking inside you, as in all of us from Original Sin one way or another.

And remember as well the words of the two angels dressed in white garments addressed to the apostles before these men returned to Jerusalem in prayerful preparation for Pentecost: “Men of Galilee, why are you standing there looking at the sky? This Jesus who has been taken up from you into heaven will return in the same way as you have seen him going into heaven” (Acts 1:10-11). I’ve often thought of these words as a stirring call to action: “Don’t just stand there, do something!”

Evangelize in your own way as best you can. As we head into trying times from the Coronavirus pandemic, you’re going to need our Lord’s help and grace now more than ever to cope, so that you can somehow keep your wits about you in case everyone else seems to be losing theirs, and to help others to do the same!

Return from Some Thoughts About Jesus' Ascension
to Prayer Blog Page