A PRAYER TO
CHRIST THE KING 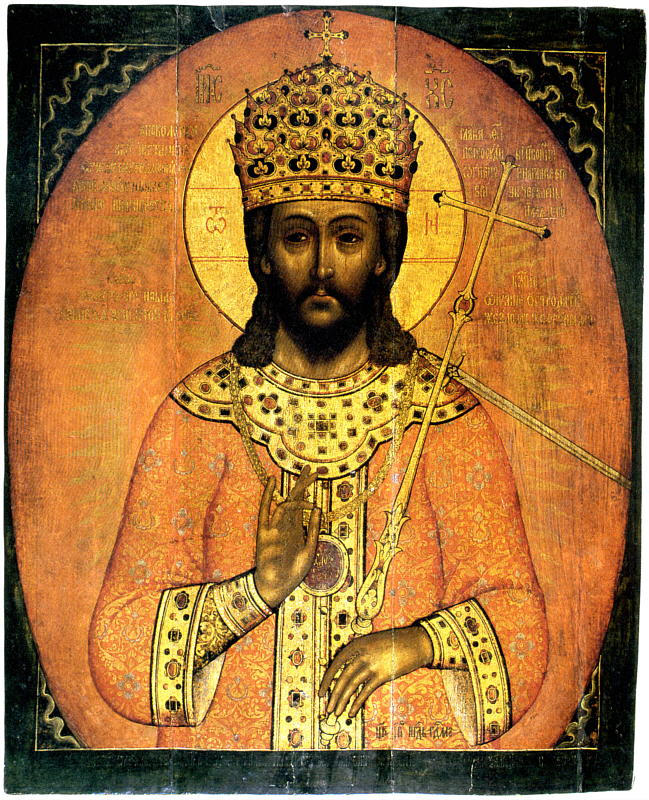 The prayer to Christ the King printed below gives us a great answer to the often-asked question “Who’s in charge here”! When we say that “I am the captain of my ship, the master of my soul,” and don’t seek God’s guidance, our boat is often in danger of capsizing in the choppy waters of life’s vicissitudes.

Our Lord and Savior Jesus Christ can provide us a safe harbor instead! This prayer can be prayed any time of the year, not just on the feast day of Christ the King, which occurs in the last Sunday of the church's liturgical year, usually towards the end of November.

O Jesus Christ, I acknowledge you as universal King. All that has been made has been created for You. Exercise all Your rights over me. I renew my Baptismal Vows. I renounce Satan, his pomps and his works; I promise to live as a good Christian. And, in particular do I pledge myself to labor, to the best of my ability, for the triumph of the rights of God and of Your Church. Divine Heart of Jesus, to You do I offer my poor services, laboring that all hearts may acknowledge Your sacred kingship, and that thus the reign of Your peace be established throughout the whole universe. Amen.

Pope Pius XI instituted the feast of Christ the King in 1925 to combat the disturbing growth of secular as well as atheistic thinking around the world. Many rulers and elites in various countries had fallen dangerously prey to the notion that mankind could manage just fine without God, thank you.

They sought to relegate our Creator to an insignificant role in public life or to no role at all, as in Soviet Russia. The journalist Lincoln Steffens had recently described that atheistic society, a brutal dictatorship, with these infamous words: “I have seen the future, and it works.”

Needless to say he was tragically mistaken. When we kick God out of our lives our world becomes more turbulent and dangerous, not less, as we wind up worshipping the false Gods of money, power, and fame instead. As St. James said in his New Testament letter "where there is envy and contentiousness there is instability and every wicked deed" (James 3:16).

When we forget God’s commandments, we also become more vulnerable to enslavement by such despots as Hitler, Mao, Stalin, Pol Pot, and their minions, men who demand our worship with an iron fist, leaving miles of killing fields in their wake.

For example, this propaganda poster below, entitled “Stalin is the people’s happiness,” appeared while millions of Russians were perishing in his concentration camps, the gulags as they were known, set up for “enemies of the state!” The dictator, like all such men, sought to make himself God, much like the Archangel Lucifer when he rebelled against our Creator saying “I will not serve.” 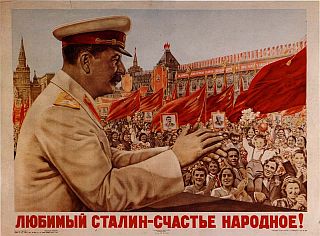 Speaking of happiness, Pope Pius XI pointed out in his encyclical Quas Primas, in which he established the feast of Christ the King, that our Lord is the author of happiness. He wrote “Oh, what happiness would be Ours if all men, individuals, families, and nations, would but let themselves be governed by Christ!”

Indeed, imagine how much less strife would we see in this world if we all made a better effort to follow His law of Love established in the Ten Commandments!

Tragically, we’ve seemed not to have learned much from the past century! Can it be any wonder there’s so much sickness when we turn away from the Divine Physician? Christ is shunted away in tabernacles located not front and center but rather off to the side, or even in a separate room, in many churches nowadays.

Wizards of Smart in organizations such as the powerful and influential World Economic Forum are working to carry out their plans for a New World Order in which the Social Kingship of Christ is to be replaced by some sort of secular “Brotherhood of Man” being built on foundations of sand (Matt 7:26) by global corporate bodies such as the European Union and the United Nations.

There is much talk nowadays about a "Great Reset" to "Build Back Better" with some great utopia headed our way for sure, to be spearheaded in part by a supposed digital nirvana including some future merger of man and machine! You may have heard or read about the World Economic Forum’s plans for Agenda 2030 as part of a one-world government.

Their mantra is "You will own nothing and be happy!" All we have to do is give our increasingly coerced assent to technocrats running everything for us, and supplying all our needs supposedly for our own good, but for their glory, not God's!

In addition, supernatural faith is noticeably lacking nowadays in the church, both within the clergy and the laity. Many of our religious seem to be focused mainly on important but still worldly concerns, such as dealing with poverty and immigration, as if they were trying to create heaven on earth.

The supposed needs of Mother Earth (as in dealing with “Climate Change”) eclipse those of Holy Mother Church. Saving the planet overshadows saving souls!

Perhaps as a result, in no small part, a recent Pew Research survey published in December 2021 placed the number of Catholics at 21% of the US population while the number of those with no particular affiliation (the “nones”) is now up to 29%!

Conspiracies of silence abound among our elites hiding various forms of corruption, both in society at large and, tragically, among prelates in Christ’s Mystical Body, His church.

In the meantime, substance abuse has reached epidemic proportions, both from legal and illegal drugs. And many people are trying to fill the void in their lives, one that our Lord would love to help them fill, with addictive behavior involving drugs, alcohol, sex, or even “likes” on social media.

In the meantime, the aura of the pagan deity Moloch abounds in this country as politicians champion not just abortion (aka “choice”) but ending the lives of newborn babies as well, in the name of “reproductive rights”!

Oblivious to Christ’s warnings, many in our educational establishments seem all too ready to plunge into the seas with millstones around their necks (Mark 9:41) as they assault young children’s innocence by teaching them about various sexual practices and the supposed desirability of transgender surgery!

Drag Queens get invited to libraries to read to kids and heck, even play with them! And hey kids, you too can be a star in drag, just like the Amazing Desmond, a boy who a few years back found fame, and even an appearance on Good Morning America at the tender age of 11!

Our society has become so divided that people were at each other’s throats a while back over getting Chicken sandwiches at a popular fast food chain, and there was even one fatality after a heated argument. A life snuffed out over a Chicken sandwich!

So, how’s that “Brotherhood of Man” (without Christianity, without God) working out for you, folks? And, of course, the Covid pandemic has wreaked all sorts of havoc on society, with much confusion and division as to how to deal with this virus properly.

In addition, we’ve seen our cities and even rural areas becoming increasingly dangerous as crime spirals out of control to the point where some stores have had to close down because they have been victimized by rampant repeated unprosecuted shoplifting.

St. Augustine famously wrote in the beginning of his Confessions “Thou hast made us for Thyself, O Lord, and our hearts are restless until they rest in Thee.” I would add, sadly, that our hearts are not just restless, they tend to be clueless as well, as what could bring us true happiness!

As Pope Pius XI put it “When once men recognize, both in private and in public life, that Christ is King, society will at last receive the great blessings of real liberty, well-ordered discipline, peace and harmony. Our Lord's regal office invests the human authority of princes and rulers with a religious significance; it ennobles the citizen's duty of obedience.”

Christ Himself gave us an example of obedience par excellence right before His Passion when he said to His Heavenly Father in prayer in the Garden of Gethsemane “Father, if thou art willing, remove this cup from me; yet not my will by thy will be done” (Luke 22:42).

Remember also that each of us has a special mission here on earth, a unique place in the Mystical Body of Christ. What’s your mission? It doesn’t have to be something earth shattering.

As St. Therese of Lisieux said, in describing her little way, the smallest things we do for the love of God can be quite big in His eyes! Whatever “poor services” (mentioned in this prayer to Christ the King) you offer our Lord can help you define your mission.

Christ said in John’s Gospel that His Kingdom was not of this world (John 18:36). Yet He suffered and died for us so that we might be able to join Him in His Kingdom in Heaven for eternity! One of the hallmarks of that Kingdom for which we are all striving, as pilgrim souls here on Earth, is that lasting peace, what we call in Mass “the Peace of Christ.”

Pope Benedict XVI gave us a mandate, when he came to the United States, for us to work and pray for the coming of Christ’s Kingdom as fully as possible. He said this meant “facing the challenges of present and future with confidence in Christ’s victory and a commitment to extending his reign.”

He also told us to be “constantly alert for the signs of its presence, and working for its growth in every sector of society.” After all, as we say in the Lord’s prayer “Thy Kingdom come.”

May this prayer to Christ the King help us all resist the snares of Satan as we strive to experience the true peace that only our Lord can bring!