DOM SCUPOLI ON PRAYER, FROM
THE SPIRITUAL COMBAT 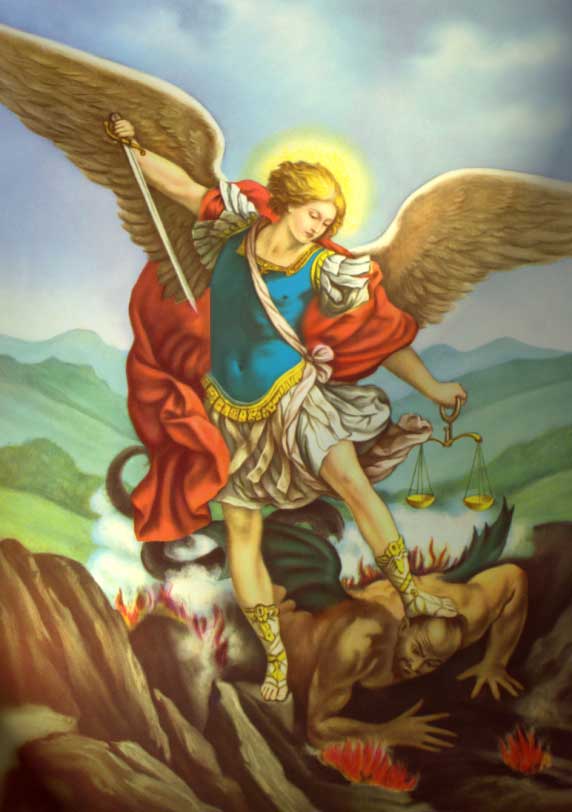 The selection below is taken from the 16th century priest Dom Scupoli’s famous book The Spiritual Combat. Pope Leo XIII wrote in an encyclical in 1890 that we Catholics are “born for combat.” The battle he referred to was not one fought with guns and bombs but rather with hearts and minds proclaiming the truth and beauty of our faith!

In calling his book “The Spiritual Combat” Fr. Scupoli was referring to another kind of battle as well, an internal one each of us faces against the devil seeking to ensnare us for our Eternal ruin! He sought to give us strategies for victory over Satan. This concept brings to mind St. Michael’s triumph over the Evil One as shown in this famous depiction above!

We all carry the stain of Original Sin on our souls which makes us harbor sinful desires. St. Paul noted in his letter to the Romans that “I am delighted with the law of God, according to the inward man:  But I see another law in my members [body], fighting against the law of my mind, and captivating me in the law of sin, that is in my members” (Rom 7:22-23).

Our Lord Himself spoke about this when he told His disciples that "the things that come from within are what defile a man. For from within, out of the heart of men, come evil thoughts, adulteries, immorality, murders, thefts, covetousness...blasphemy, pride, foolishness. All these evil things come from within, and defile a man" (Mark 7:21-23).

Nineteen centuries later, Archbishop Fulton Sheen echoed this sentiment when he once spoke of the civil war he said was raging in each of our souls between our good and bad inclinations.

Dom Scupoli was well aware of our struggles to do God’s will. He was a member of the Theatines, a religious order that cultivated and taught virtues and cared for the sick or imprisoned. Ordained in 1577, he suffered a humiliating setback in 1585 when he was first imprisoned for a year and then laicized, probably from being slandered in some form. He was finally able to resume his priesthood soon before his death in 1610.

Fr. Scupoli bore this cross with great dignity. Indeed, he wrote The Spiritual Combat during this time of trial. It was first published in Venice in 1589 and soon became a best seller and had been published 60 times in German, Latin, French, and Spanish by the time of the priest's death. Over time some 600 editions of this classic have appeared in such languages as Armenian, Japanese, Polish and Portuguese!

Dom Scupoli gave a copy of The Spiritual Combat to St. Francis de Sales in 1590 and that great saint carried the book in his pocket for 18 years, recommending it highly to those under his spiritual direction. In the 19th century Blessed John Henry Newman also found it to be a great influence in his conversion from the Anglican Church to Catholicism.

In this book, Fr. Scupoli offers four main weapons for us to use in our battle against Satan to do God’s will: The first weapon is a healthy distrust of ourselves and of our ability to do good without God’s assistance. The second follows naturally, that we must have confidence in God to help us deal with our weaknesses.

The third weapon involves spiritual exercise for the proper use of one’s mind and body. And the last, but by no means least, weapon in our spiritual arsenal is prayer, as we read in Chapter 44 (“Of Prayer”) of The Spiritual Combat printed below:

(Note: Underlines are added; an online copy of the entire book can be found here.)

If self-distrust, trust in God, and spiritual exercises, be so needful, as has been already shown, in this conflict, needful above all is prayer (the fourth weapon above mentioned) by means of which  we may obtain from the Lord our God not these alone, but all other good things. For prayer is the instrument for obtaining all the graces which flow down upon us from that Divine Source of love and goodness. By prayer, well used, you will put a sword into the hand of God wherewith to fight and conquer for you. And to use it well, you must be well exercised in the following practices, or be striving to become so.

1. You must have an earnest desire to serve His Divine Majesty in all things, in the way most acceptable to Him. In order to enkindle this desire, consider well that God is supremely worthy to be served and honored for His supreme excellencies, His wisdom, goodness, majesty, beauty, and all His other infinite perfections. That to serve you He labored and suffered for three-and-thirty years; binding up and healing the putrefying sores envenomed by the poison of sin, not with oil, or wine, or linen, but with the precious stream that flowed from His most sacred veins, and with His most pure flesh torn by scourges, thorns, and nails. And consider further the great value of this service. By it we gain the mastery over Satan and ourselves, and are made the children of God Himself.

2. You must have a lively faith and confidence that the Lord will give you all things needful for His service and your good. This holy confidence is the vessel which Divine Mercy fills with the treasures of His grace; and the larger and more capacious it is, the more richly laden will our prayer return into our bosom. For how shall the almighty and unchanging God fail to impart to us His gifts, when He has Himself commanded us to ask for them; promising, also, to give us His Spirit, if we ask with faith and perseverance?

3. When you pray, let it be your intention to will God's will alone, and not your own, as well in asking as in obtaining; that is, pray because God wills you to pray, and desire to be heard in so far and no farther than He wills. Your intention, in short, should be to unite your will to the will of God, and not to draw His will to yours. And this because your will, being infected and ruined by self-love, often errs, and knows not what to ask; but the Divine Will, being always united to ineffable goodness, can never err.

The will of God is therefore the rule and ruler of all other wills; and it deserves and wills to be followed and obeyed by all. Ask, therefore, always such things as are conformable to God's will; and if you be in doubt whether anything be so or not, ask it on the condition of its being according to the will of God. And those things (such as all virtues) which you certainly know to be agreeable to Him, ask rather in order to serve and please Him thereby than for any other motive, how spiritual so-ever.

4. Be careful when you go to prayer to adorn yourself with works corresponding to your petitions; and after you have prayed, labor more earnestly still to fit yourself for the grace and virtue you desire to obtain. For the exercise of prayer must be so continually accompanied by the exercise of self-discipline, that the one may involve the other; else, to pray for a virtue and take no trouble to obtain it, would be rather to tempt God than to serve Him.

5. Let your petitions be ordinarily preceded by thanksgiving for previous mercies, in the following or similar forms: "O Lord, Who of your goodness have created and redeemed me, and on so many and numberless occasions, unknown to me, have delivered me out of the hands of my enemies; help me now, and refuse not my petitions, though I have been ever rebellious and ungrateful to you." [You can put his in your own words if that makes it easier for you. This doesn't have to be memorized, as DS says himself. it's the thought that counts!]

And if, while you are praying for any particular virtue, some painful occasion for its exercise should present itself, fail not to return thanks to God for the opportunity thus afforded you, which is no small token of His loving kindness.

6. As prayer derives its efficacy and its power of propitiating God and inclining Him to our desires from the goodness and mercifulness of His own nature, from the merits of the life and passion of His only-begotten Son, and from His promise to hear us, conclude your petitions with one or more of the following sentences: "Of your great mercy, O Lord, grant me your grace. May the merits of your Son obtain for me my petition. Remember Your promises, O my God, and incline Your ear to my prayer."

And at other times ask for graces through the merits of the Virgin Mary and the Saints, who have great power with God, and are greatly honored by Him, because in this life they greatly honored His Divine Majesty. Continue perseveringly in prayer; for humble perseverance vanquishes the invincible. And, if the importunity of the widow in the Gospel [Luke 18:1-8] inclined to her request the unjust judge laden with iniquity, shall a like perseverance fail to incline to our petitions that God Who is Himself the plenitude of goodness?

And although the Lord should delay to hear, and even seem to reject your prayer, pray on still, and still hold fast firm and lively confidence in His aid; for in Him there is no lack, but an infinite superabundance of all things needful for the grace we ask.

Therefore, unless there be some fault on your part, you may rest assured either of obtaining all your petition, or something which will be more profitable for you, or, it may be, both together; and the more He seems to repulse you, the more do you humble yourself in your own sight, considering your own demerits, and fixing your eyes steadfastly on the mercy of God.

Establish thus more and more your confidence in Him, which will be most acceptable to your Lord, if you maintain it more lively and entire the more it is assailed. Lastly, give thanks always to God, acknowledging Him to be no less good, and wise, and loving, when some things are denied, than if all were granted you. Happen what may, do you remain ever steadfast and joyful in humble submission to His Divine Providence.

Return from Dom Scupoli on Prayer
to Thoughts on Prayer


© 2021 OUR CATHOLIC PRAYERS All Rights Reserved