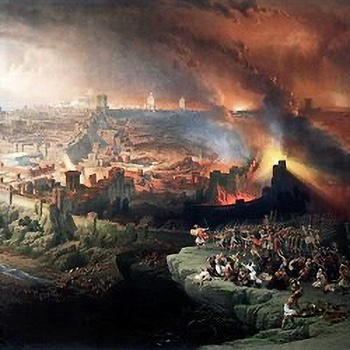 As we approach the end of Lent, with all the concerns we have about the Coronavirus, lockdowns, vaccine mandates, war, and rampant crime, among other concerns I  thought this prayer would be an appropriate one for our topic for this episode, that of trying to keeping our wits about us, with God’s help, in tough times:

Dear Lord Jesus, help me in these trying times to do Your will in all things, that I may bear whatever crosses come my way with loving forbearance and equanimity. May I not be blind to the graces You wish to send me to endure them. Help me to remember those words you uttered to Your Heavenly Father (and mine as well) the night before your Passion. “Father, if you are willing, remove this cup from me, yet not my will but yours be done.”

When praying the Fourth Sorrowful Mystery of the Rosary, the Carrying of the Cross, I often find myself meditating on Jesus’ chilling message to the women weeping behind Him on His tortuous journey to Calvary: "Daughters of Jerusalem, do not weep for me, but weep for yourselves and for your children. For behold, the days are coming when they will say, 'Blessed are the barren, and the wombs that never bore, and the breasts that never nursed!' Then they will begin to say to the mountains, 'Fall on us'; and to the hills, 'Cover us.' For if they do this when the wood is green, what will happen when it is dry?" (Luke 23:28-31).

Our Lord once told the mystic Gabrielle Bossis, as recorded in the book He and I, that He sees time at a glance. It is indeed mysterious, and another of those things beyond our limited human understanding, that God exists in an eternal “now” outside of our concept of time.

As such he can see events in our timeframe as if they were something that had a physical dimension of height, depth and width, in what might be called spacetime.

This is not the place, nor do I even begin to have the expertise to elaborate on this further. Suffice it to say that our Lord on the way to His crucifixion saw a very real holocaust just “down the road”, as it were, that would occur only a few decades later, as shown in the picture above of Jerusalem in flames!

Tensions present during Jesus’ earthly ministry between the Jews and the Romans, in what was then Roman-controlled Judea, boiled over into outright rebellion in 66 AD. At first, the Jews, who saw the Romans as occupiers, scored some victories but in the year 70, the Roman military commander Titus, and his legions gained the upper hand. You didn’t mess with Rome back then! This wasn’t the decaying empire that would itself be overrun by outside forces some 3 to 4 centuries later!

Indeed, the 1st century historian Josephus in his book The Jewish War put the total number of deaths from that war, including many from outright starvation and even crucifixion, at over one million.

Although some scholars have contested this large number, the carnage was quite real. In the summer of the year 70, the Jews suffered a devastating and humiliating defeat which included the destruction of the great Second Temple, their fundamental place of worship!

So when Jesus spoke of the savagery of those who could jeer at and viciously put an innocent man, Himself, to death on the cross, he was also decrying the brutality they could otherwise be capable of. Christ well understood human nature (John 2:24-25) and how given our proclivity to do what is evil we need a Savior, Himself, to help us to turn away from our barbaric tendencies!

The footnotes for this text from the Ignatius Study Bible, an excellent resource by the way, backs up this interpretation that if this could be done to an innocent man (the green wood as it were) what would be done to the guilty (the dry)?

Archbishop Fulton J. Sheen in his wonderful Biography of our Lord entitled Life of Christ picked up on this theme when he wrote “Hidden in His words was a plea for faithfulness to avert the doom of Jerusalem. On this, as on many other occasions, He bade His hearers look to the state of their own souls. He diverted attention from Himself Who was sinless, to those who needed Redemption...so now the women were told not to have misplaced sorrow; let them look to their souls, their children, their city. He needed no tears; they did.”

So, why do I find Jesus’ warning mentioned above so haunting? It all comes back to what is green and what is dry. Green wood is much harder to burn than that which is dry, which is like kindling.

Yet, while we’ve seen so much antisocial behavior all around us in supposedly good “green” times, as supply chain issues, rising inflation, and shortages on just about everything, become more and more common, the social fabric has become increasingly frayed and even tattered.

As it stands now shoplifting has become so normalized in some cities that many chain store pharmacies have easily stealable goods under lock and key and some have even been forced to close from all the theft. Carjackings, random, often brutal assaults and other such crimes are also becoming more commonplace. We’ve also seen much division and even hatred over politics and culture.

We live in a time where people care more about Mother Earth than Mother Mary, a world full of the “woke” who are so easily offended but think nothing of offending God, if they give Him any thought at all.

It doesn’t help that many people have either lost supernatural faith in Christ and His Church, never had it, or were never taught about it in the first place! We live in a world saturated with sin and selfishness, where so many people think of the Holy Trinity as me, myself, and I (or perhaps otherwise as sex, drugs, and rock and roll). Belief in our Lord’s actually being God and not just some philosopher has been diminished or otherwise so watered down as to be meaningless.

And we seem to be raising a generation on truly pagan fare in latchkey households with broken families shattered by divorce and nonexistent fathers. A world where the state becomes God and pills replace prayer as the stress reliever of choice.

So, this begs the question: how will we treat each other in the difficult “dry” days to come? We’re going to be experiencing more fallout not just from the Coronavirus and the economic dislocations this pandemic has caused, but also. as mentioned earlier, from food shortages, rising rampant inflation, especially for gasoline and many basics, and a possible debt crisis worldwide, from both governments and banks that are way overextended, fiscally speaking.

(If people are fighting over Pandemic treatments and such will they do over food? If their God is Netflix on that 55” flat screen TV what will they do if the power goes out from a cyberattack or an energy shortage? Just-in-time deliveries to grocery and other stores have stopped in many places, and rationing (limits on items that can be purchased) is becoming more and more common. People are becoming increasingly edgy understandably over lost income from job shutdowns, the cancel culture, Pandemic edicts, and woke school curricula in this age of mixed-up priorities and increasing amorality.

How can we possibly manage to get through such hard times without tearing each other apart over necessities and frivolities alike? One comes back to our Lord’s words in scripture about man’s capacity for salvation on his own steam: “With men this is impossible but with God all things are possible” (Matt 19:26).

What this means is that without having supernatural faith in our Lord and in the necessity of following His laws of love, the Ten Commandments through prayer, the sacraments and a sincere loving effort to do His will, we’re in for a world of hurt.

Admittedly, following Jesus doesn’t mean we won’t have crosses to carry. Quite the opposite in fact, as He Himself spoke of in Luke’s Gospel (9:23). Yet by putting on His armor in prayer and asking constantly for His help and grace, we may be able better resist the devil’s effort to delude us and to drag as many of us down to hell as he can! Christ promises none of us an easy time of it in this world, but He does promise those who follow Him faithfully Eternal Life in heaven!

No twerking pop stars, entertainment idols, and the assorted ne'er-do-wells we treat as Gods can love you or give you the grace you need to withstand tough times like Jesus! Our man Gods are poor substitutes for the God man, the true God we were meant to honor and worship, and not just at Christmas and Easter, Our Lord and Savior Jesus Christ!

This isn’t meant to be a post full of saccharine bromides. Cultivating a life where you’re receptive to God’s grace takes time and effort after all. But it is well worth it! Consider the words of our first pope Saint Peter when all the disciples seemed to have deserted Jesus after he first spoke of His real Presence, in what would be  the Eucharist: "Lord, to whom shall we go? You have the words of eternal life” (John 6:69).

The important thing is to stay close to God to keep your cool in the midst of stress. As we read in Psalm 95 “If today you hear his voice harden not your hearts”. Also, as many of you have probably heard and read as Jesus said in the Last Supper discourse: “Let not your heart be troubled, nor let it be afraid" (John 14:27).

I’d also like to recommend a great resource, a book by Dan Burke Spiritual Warfare and the Discernment of Spirits (which is also available as a Kindle e-book) that can help you see when the devil is trying to jerk you around so you can better be able resist him. It's short, easy to read, and quite inspiring!

Think of time spent with God in prayer (particularly the rosary) as strengthening your spiritual “immune system” from the virus of the devil’s lies and snares to make you panic or despair!

Don’t let worries about your situation cloud out your need to trust in Jesus and to stay close to Him! Help our Lord give you the grace to share His love, and hopefully, your level headedness, with others!

Return from Green and Dry Wood
to Prayer Blog Page