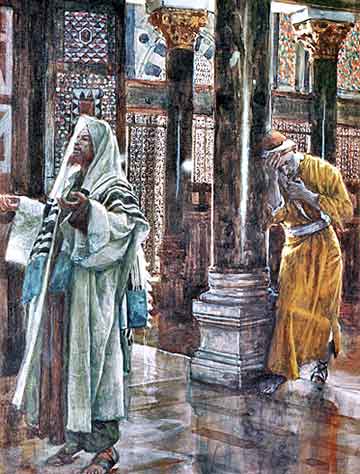 The Jesus Prayer is a short, simple prayer that can put you in the right frame of mind to get closer to God. And, at one sentence long, it’s quite easy to memorize!

Lord Jesus Christ, Son of God, have mercy on me, a sinner.

We find a similar version of this prayer in Luke’s Gospel in our Lord’s parable of the Pharisee and the tax collector, illustrated above. Both of them are praying in the temple in Jesus’ account, yet the contrite tax collector is justified before God rather than the smug Pharisee, who’s boasting about his religious achievements (Lk 18:9-14). What does the tax collector ask of God here? “Be merciful to me a sinner” (Lk 18:13).

Outside of this Gospel account, the Jesus Prayer can be traced back to the Eastern Orthodox Church from the 4th century. St. John Climacus recommended it in his work The Ladder of Divine Ascent from ca. 600AD.

It is still a staple of many in the Orthodox community, although it can be prayed by anyone, of course! Because of its simplicity, it is often prayed on knots in prayer ropes in the Eastern Church, as an aid to concentration to help people “pray without ceasing”, as St. Paul urged Christians to do in his first letter to the Thessalonians (1 Thes 5:17).

The Jesus Prayer is also the focus of the 19th century Russian classic The Way of a Pilgrim. This book chronicles one man’s attempt to follow St. Paul’s advice given above, with the help of this prayer, as a means to achieve union with God.

The Catechism of the Catholic Church notes that the sentiment expressed in the Jesus Prayer opens our hearts both to humanity’s misery and Christ's mercy (CCC 2667). Indeed, it has been called fittingly a “prayer of the heart”.

It is wonderfully versatile as well! It can be prayed repeatedly as an aid to meditation by religious, or just as a simple way for anyone to “check in” with our Lord during a busy day, to be aware of His presence and avail themselves of His comfort and strength!

(The Jesus Prayer is also good in that it focuses on His Holy Name, which, as the Catechism points out, is also a great form of prayer in and of itself (CCC 2668), as mentioned here as well. More interesting takes on the Orthodox Church's approach to the Jesus Prayer can be found here.

The Jesus Prayer shows us the way towards true humility. It is so easy for us, especially nowadays, to forget that we are all sinners in needs of God's mercy. He is more than ready to give it to us. All we need to do is ask for it, in a sincere, heartfelt fashion. Indeed, Christ told St. Faustina, the Polish nun to whom he appeared regularly in the 1930's, that he would “pour out a whole ocean of graces” to those who would approach the fountain of His mercy.

Many people nowadays seem to have lost a sense of sin. It is both very easy, and very seductive, to fall in to the trap of moral relativism, to fall into the “I'm OK You're OK” mentality, in which we see everyone as basically pretty good, and not as fellow sinners.

Others seek to blame their transgressions on society at large, or on their having some sort of “complex”. In this regard, Bishop Fulton Sheen, about 50 years ago, bewailed the tendency of people to seek to have their sins explained away by psychoanalysis rather than to have them forgiven by our Lord. One can imagine this tendency has only gotten worse since then!

(This is not meant to disparage legitimate needs for therapy and psychiatry, only their abuses, and the degree to which these breed excuses for people to shut God out of their lives.)

Denying our sinful nature only makes things worse. Instead of asking God for his graces to help us deal with our sins, our temptations, and our troubles, we are then apt to turn away from Him. We either suppress our sense of remorse or, thinking that God couldn’t possibly forgive us, refuse to ask Him for His mercy.

This put us at risk of falling even deeper into the black hole of sinful behavior, such as abusing alcohol or drugs, while giving into despair, thinking we can never turn to God for assistance in our misery.

Don’t let your sins harden your heart! As the Psalm goes “If today you hear his [God’s] voice, harden not your hearts (Ps 95:8). Or, as our Lord said to St. Faustina “Let them [sinners] not fear to approach Me; they are in most need of My mercy.”

It is important to keep in mind as well, that Christ instituted the Sacrament of Penance, also known as Confession, for us to be able to unburden ourselves of our sins to a priest acting in His name. While the Jesus Prayer is a good quick way to focus on being in God’s presence in all humility, it cannot and should not replace this important sacrament.

While the Church only requires us to confess any mortal sins at least once a year, remember that in confession, God only pardons your sins, but also gives you the graces to resist temptation in the future!

Thus, more frequent confessions, of mortal and venial sins, can help tremendously in purging sin from your life. Praying the act of contrition, both in Confession and at home, perhaps in evening prayers, is a powerful way to ask God for His mercy.

Still, the Jesus Prayer is a special “prayer of the heart”. Speaking of one's heart, keep these words from the prophet Joel from the Old Testament in mind: “Rend your hearts, and not your garments, and turn to the Lord your God: for he is gracious and merciful, patient and rich in mercy” (Joel 2:13).

Return from the Jesus Prayer
to Special Prayers