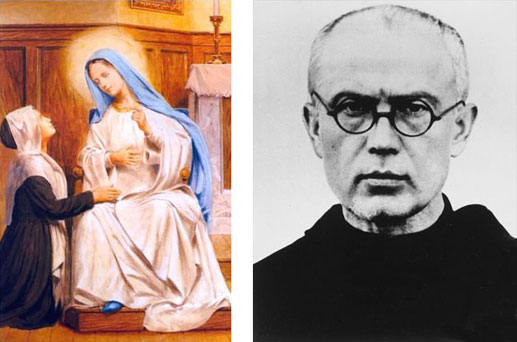 The Miraculous Medal prayers printed below have been inspired by a wonderful sacramental (an object or action used in our faith to show religious devotion) of the same name!

The Miraculous Medal was introduced to the world by St. Catherine Labouré, a novice with the Daughters of Charity of St. Vincent De Paul in France. (She's pictured above on the left with the Blessed Virgin Mary). In 1830 she received a vision from Mary in which Our Lady appeared inside an oval frame which bore the inscription “O Mary, conceived without sin, pray for us who have recourse to thee.”

The Blessed Mother asked that this image be put on a medal, saying all who wear it would receive great graces. The first medals were stuck in 1832.

Many of those wearing them did indeed receive blessings, including cures for illnesses and seemingly miraculous conversions, and it soon became popularly known as the “Miraculous Medal.” Today, the Miraculous Medal is still a wonderful way of showing, and spreading, devotion to both our Lady and our Lord as well!

This first Miraculous Medal prayer below is associated with St. Maximilian Kolbe (pictured above, at right), an heroic priest martyred by the Nazis in World War II. The first part comes from the inscription from our Blessed Mother herself. St. Maximilian added the second part after having witnessed virulently anti-papal, (pro-Lucifer as well, if you can believe it!) demonstrations in the Vatican sponsored by the Freemasons, who he specifically referenced as enemies of the church in another version of this prayer.

St. Maximilian’s devotion to our Lord and His Blessed Mother, and his distress at such a scene, was such that he formed the Militia of the Immaculata (MI for short) in 1917. This organization still exists today. Its mission is “To Lead Every Individual With Mary To The Most Sacred Heart Of Jesus” and is open to all Catholics, religious and lay people alike as described here. St. Maximilian called the Miraculous Medal his “silver bullet” against evil, and all MI members wear it.

This second Miraculous Medal prayer deals with the sacramental itself, and has some nice MI overtones as well:

O Virgin Mother of God, Mary Immaculate, We dedicate and consecrate ourselves to you under the title of Our Lady of the Miraculous Medal. May this Medal be for each one of us a sure sign of your affection for us and a constant reminder of our duties toward you. Ever while wearing it, may we be blessed by your loving protection and preserved in the grace of your Son. O Most Powerful Virgin, Mother of Our Savior, keep us close to you every moment of our lives. Obtain for us, your children, the grace of a happy death; so that in union with you, we may enjoy the bliss of Heaven forever. Amen.

It is important to note as well that, as with all sacramentals, the Miraculous Medal is not some “lucky charm”. Keep in mind also that in expressing devotion to Mary, we do not worship her, as many Christians in other denominations, especially some Evangelicals, believe, but rather honor her in her devotion to our Lord! As the popular saying goes “to Jesus through Mary.”

Remember also her last words in Scripture, which could almost be her motto, in which she told the attendants at the wedding feast of Cana “Do whatever he [Jesus] tells you” (John 2:5). 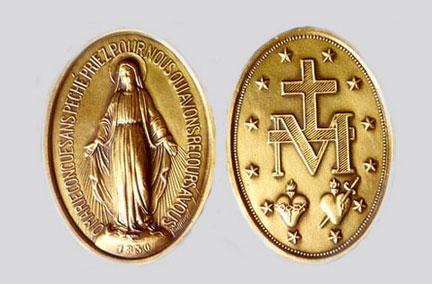 The Miraculous Medal has been called “a summary of the Church’s teaching on Our Lady, a mini-catechism of the faith for everyone.” Indeed, the Marian vision that inspired the medal included some important symbolism!

For starters, the reference to Mary’s having been conceived without sin on the medal, shown in its original French in the photo above, was defined as a Dogma by the church in 1854. (Note that this refers to Mary’s conception, not to Jesus’ birth, a common misconception!)

Note also that Mary is shown in the photo above standing on a globe crushing the head of a serpent. This is in line with scripture, from Genesis 3:15, which foretells Satan’s ultimate defeat at the hands of her Son. (Granted, this is not readily visible here or indeed on many Miraculous Medals, particularly small ones!)

On the back of the medal (the picture on the right above) we see symbols of Jesus and Mary, in the Cross (the symbol of her Son’s victory over sin and death for us at Calvary) with the Letter “M” for Mary right underneath it. Directly underneath that are two hearts, the Sacred Heart of Jesus and the Immaculate Heart of Mary, both filled with great love for each other and for us too!

We see their sadness over our sins as well in this depiction. On the left side are the thorns of our indifference and ingratitude piercing our Lord’s Sacred Heart even while it burns with love for us. On the right side we see a sword piercing Mary’s heart, which is filled with sorrow as well as love (as described here). Surrounding these poignant images we see twelve stars symbolizing the twelve apostles.

On the front of the medal (left) we see our Lady’s hands outstretched with rays of light, symbolizing grace, streaming from her fingers. (Again, granted, this may be hard to see on a small medal!) We are reminded here of St. Louis de Montfort’s reference to her as the “treasurer and dispenser of God’s graces.”

We can see from all this that the Miraculous Medal is an important sacramental, indeed, as it can give us the graces Our Lady wishes us to have on behalf of her Divine Son. Indeed, she herself said to St. Catherine when giving her the vision of the medal “Have a medal made according to this model. Everybody who wears it will receive great graces by wearing it around the neck. The graces will be abundant for persons who wear it with confidence.” Remember, however, that the most important place of honor for Mary must be in our hearts, not around our necks.

Prayers such as the Hail Mary and the Memorare can also help do us worlds of good in receiving and sharing the graces she wishes to give us. They are all meant to lead us to a closer relationship with Jesus!

Mary showed St. Catherine an intriguing symbol in her Miraculous Medal vision. The rays of light emanating graces came from sparkling jewels on Our Lady’s fingers. St. Catherine noticed, however that some of these jewels were dark and not giving forth any light. Mary explained that “those stones which remain dark symbolize the graces people have forgotten to request.” Don’t let such graces be lost on you! And don’t ever be afraid to ask for her help in obtaining Christ’s mercy!