THE NOVENA OF GRACE 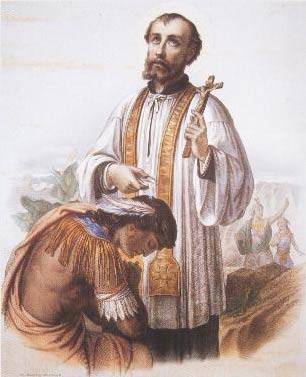 The Novena of Grace, printed below, is addressed to one of the Church’s most famous missionaries, Saint Francis Xavier (1506-1552), who was also one of the first members, with along with Saint Ignatius Loyola and five others, of the Society of Jesus (better known today as the Jesuits). This celebrated religious order was founded in the 16th century to serve the Pope and the Church through education and missionary work.

O Saint Francis Xavier, well beloved and full of charity, in union with thee, I reverently adore the Majesty of God; and since I rejoice with exceeding joy in the singular gifts of grace bestowed upon thee during thy life, and thy gifts of glory after death, I give Him hearty thanks therefore; I beseech thee with all my heart’s devotion to be pleased to obtain for me, by thy effectual intercession, above all things, the grace of a holy life and a happy death. Moreover, I beg of thee to obtain for me…(here mention the spiritual or temporal favor to be prayed for). But if what I ask of thee so earnestly doth not tend to the glory of God and the greater good of my soul, do thou, I pray obtain for me what is more profitable to both these ends. Amen.

Saint Francis Xavier helped to convert thousands of people to Christianity (such as members of the Paravas community in Southern India, as shown in this painting above) throughout parts of India, Malacca (known today as part of Malaysia), the Moloccan Islands (now part of Indonesia), and even Japan! (He baptized as many as 10,000 in a single month according to one account!)

The saint had a unique ability to convey God’s word with great charity and grace to many different kinds of people in different situations, from poor children in Indian slums to Japanese noblemen.

What’s more, he did all this in the ten years between his arrival in Goa, India (after having undergone a rigorous thirteen month journey by ship to get there from Portugal!), and his untimely death from an illness while en route to mainland China. Is it any wonder then that he is revered today as a Patron Saint of missionaries?

The history of the Novena of Grace is intriguing. One night in Naples in early January 1634, Saint Francis Xavier appeared in a vision to Father Marcello Mastrilli, a Jesuit priest near death from an accident, and requested that he renew a vow he had made earlier to go to Japan for missionary work, foretelling his martyrdom there. (This was quite a dangerous undertaking at that time!)

The saint promised Father Mastrilli that “All those who implore my help daily for nine consecutive days, from the fourth to the twelfth of March inclusive and worthily receive the Sacraments of Penance and Holy Communion on one of the nine days will experience my protection and may hope with entire assurance to obtain from God any Grace they ask that is for the good of their souls and the glory of God."

Father Mastrilli was cured so quickly and so completely that night after this vision that he widely spread the news of his recovery and of St. Francis Xavier’s promises to him, quoted above, before leaving for Japan, where he was indeed martyred for the faith in October 1637.

The Novena of Grace given above, attributed to Father Mastrilli, has successfully helped many of the faithful for centuries. You can pray this novena any time during the year, not just on the dates specified by St. Francis Xavier. However, it is worth noting that March 12th marks the anniversary of his canonization by Pope Gregory XV in 1622.

Keep in mind that you don’t need to be a famous missionary to receive God’s grace. Just follow our Lord with faith, devotion, and humility, and show others His love in how you treat them. St. Francis Xavier did! It is fitting that his novena should be called the Novena of Grace.

Return from The Novena of Grace
to Novenas