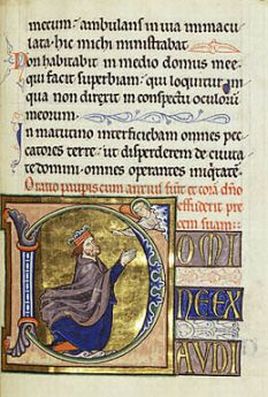 Do you ever find it hard to apologize for something? The Penitential Psalms, often recited during Lent, remind us of the importance of asking God for His mercy when we’ve sinned, with a true sense of contrition. (Their texts are given here.)

These have also been listed as the previous number of each in the series (except for Psalm 6) in earlier translations of the Bible that use a different numbering. Thus, you might see a reference to Psalm 32 (31), for example.

If the numbers might be confusing, the message the Penitential Psalms convey is not! The psalmists express deep sorrow for their sins, asking God for His help and forgiveness. Numerous composers over the centuries have set Psalms 51 (also known as the Miserere) or 130 (also known as De Profundis) to music. The celebrated Renaissance composer Orlando Di Lassus wrote music for all seven Penitential Psalms in 1584.

The psalms were written centuries before the birth of Christ. King David, pictured above in this 13th century psalm book, is considered the author of 73 of them altogether, including four of the Penitential Psalms (the first four listed above and Psalm 143).

Whether spoken or sung they still play an important part in religious services by both Jews and Christians today as prayers of lamentations, thanksgiving and praise for our Creator.

The psalms provide a valuable link from the Old Testament to the New. About a third of the approximately 300 Old Testament references in the Gospels are taken from them.

Indeed, Jesus and His apostles sang a hymn taken from Psalms 114-118 after the Last Supper. Our Lord identified with the psalmist’s lament in Psalm 22 when He cried out while on the cross “My God, My God why have you abandoned me?” (Ps 22:2)

The seven Penitential Psalms have their own special poignancy as the psalmist in each one pours out his heart to God, many times in great distress over sins that have caused him much physical and emotional anguish. The authors mix deep contrition with the hope that God’s mercy will restore them to the joy of living in His grace.

Psalm 32 begins and ends with this theme (from the translation given in the link above) “Blessed is he whose transgressions are forgiven…and in whose spirit there is no deceit.”

The psalmist speaks of the relief he feels after having confessed his sins before God and receiving His forgiveness. Having his burden of sin lifted allows him to proclaim “Rejoice in the Lord and be glad, you righteous; sing all you who are upright in heart” (Ps 32:11).

Don’t you usually feel better after apologizing to someone you've wronged in some way, like a great weight has been lifted from your shoulders? You can get that feeling from making a sincere act of contrition to the priest in the sacrament of penance (otherwise known as Confession).

Speaking of the clergy, the priest refers to Psalm 51, the fourth and most famous of the Penitential Psalms, during mass when he says “Lord, wash away my iniquity; cleanse me from my sin.”

The psalmist here asks God to cleanse his heart as well and give him the grace of a firm purpose of amendment when he says in that psalm “renew a steadfast spirit within me” (verse 10 from the link to the texts given above).

Psalm 51 further emphasizes the importance of our having integrity in our relationship with our Lord. The psalmist says to God in verse 16 from the link above, "you do not take pleasure in burnt offerings,” that is to say, in ritualistic yet insincere sacrifices before Him.

Our prayers and actions of contrition must be sincere and come from our hearts. Don’t you always feel closer to someone when you know they’re being straight with you? So it is with us in our relationship with our Creator!

We must respect God’s justice to avoid sin and trust in His mercy when we fall from grace. The well known author Peter Kreeft once observed that many people fall in to the trap instead of thinking only of God’s mercy before sinning and fearing His justice afterwards. Thus having sinned they don’t ask for His help and forgiveness (such as in Confession), turning away from Him instead.

The Penitential Psalms are a heartfelt reminder for us not to despair at those moments, for as we read in Psalm 130, “with the Lord is mercy ("unfailing love" in the link translation) and with him is full redemption” (Ps 130:7).

Return from the Penitential Psalms
to Lenten Prayers