A PRAYER TO SAINT BLAISE 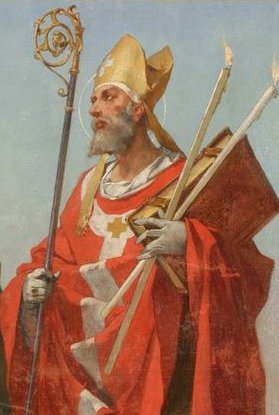 This Prayer to Saint Blaise printed below seems especially appropriate in these troubled times. Many people who would normally get their throats blessed on his Feast day on February 3rd may find themselves unable to do so because of Covid restrictions during this ongoing Pandemic. Hopefully this prayer can help lift your spirits nonetheless and be “good for what ails you” as the expression goes. The prayer itself follows:

O glorious Saint Blaise, who by thy martyrdom didst leave to the Church a precious witness to the faith, obtain for us the grace to preserve within ourselves this divine gift, and to defend, without human respect, both by word and example, the truth of that same faith, which is so wickedly attacked and slandered in these our times. Thou who didst miraculously restore a little child when it was at the point of death by reason of an affliction of the throat, grant us thy mighty protection in like misfortunes; and, above all, obtain for us the grace of Christian mortification, together with a faithful observance of the precepts of the Church, which may keep us from offending almighty God. Amen.

We don’t know as much about St. Blaise as other saints as Sts. Augustine, Catherine of Siena, or Francis de Sales, for example. He was a physician who then became Bishop of Sebaste in Armenia and was martyred during the reign of the Roman emperor Licinius in 316 AD. What other information we have on St. Blaise is based largely on legendary accounts.

He apparently performed many miracles during his life and showed admirable devotion to our faith, enough to bring down the wrath of the regional governor Agricola of the neighboring province of Cappadocia (in what is now Turkey).

As Father Steve Grunow, in an article from the Word on Fire Blog writes  “It is said that Blaise was renowned as a wonderworker, effecting miraculous cures. This would have been enough to attract attention, but he was also not averse to calling out the Roman officials who ruled the region in which he lived, Cappadocia, for their tyranny and intolerance of Christian faith and practice. The combination of a reputation for supernatural power and the courage of his convictions was not welcomed by Rome and the governor ordered Bishop Blaise to be arrested.”

There are several accounts of miracles attributed to St. Blaise that, while unverifiable, are certainly quite plausible. It is said that he was arrested while in a cave in the wilderness in Cappadocia and that, either while in prison before he was beheaded, or on his way there, he performed a wonderful cure of a boy who had a fishbone in his throat and who was in danger of choking to death, as mentioned in the prayer above.

According to another account it was not just people but animals as well who experienced this saint's supernatural abilities! Apparently he aided both in a situation where a wolf had carried off a poor woman’s piglet and he ordered the wolf to release the pig and return it to her, which the animal did! The woman apparently was so grateful that she brought Saint Blaise food and candles to light his prison cell after his arrest before his martyrdom.

Speaking of candles and throats, of course, Saint Blaise is invoked today for protection against injuries and illnesses of the throat. Thus he is best known for the blessing of throats on his feast day, February 3rd, as mentioned earlier, in which two candles are held by a priest in a crossed position across the throats of each of the faithful coming to receive the following blessing: "Through the intercession of Saint Blaise, bishop and martyr, may God deliver you from every disease of the throat and from every other illness". Then the priest makes the sign of the cross over the faithful.

I would also like to bring up here a couple of intriguing aspects of the last few lines of this prayer. First, when we talk about Christian mortification, even though that may sound spooky it’s not, not by any means!

Think rather of this term as referring to the kinds of penances we observe during Lent, such as not eating chocolate. Mortification means voluntarily abstaining from some particular pleasure or activity so as to make time, and room, for our Lord to be with you.

Other such mortifications, such as giving up some favorite TV show or pastime, at regular intervals, to make time for prayer or scripture reading, allow you to tame those ornery attractions we all have, at one time or another, to sinful inclinations or desires.

Note also the mention of following the precepts of the church to help  "keep us from offending Almighty God.” These involve mass attendance, communion, and confession, along with fasting and abstinence during certain times in the liturgical year.

Being concerned about offending God might seem like a quaint notion nowadys. Sadly it seems like so many people, especially among those of college age, imbued with identity politics and political correctness, are so easily offended these days. Yet it seems like very few of us think twice, in this chaotic era, about what might offend God!

You wouldn’t want to offend your best friend would you? The more we can draw closer to Jesus as our Lord and Savior and think of Him also as our Best Friend (but not as some Beer Buddy acquaintance) the more we can grow in holiness and partake of his graces to give us relief and strength.

Remember this: Our Lord knows you better than you know yourself and is more than ready to help you get through these topsy-turvy times if you ask Him to in prayer!

Return from A Prayer to Saint Blaise
to Prayer Blog Page

Return from A Prayer to Saint Blaise
to Prayers to Saints