A PRAYER TO
JOHN THE BAPTIST 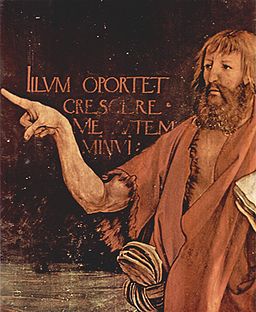 This prayer to John the Baptist printed below is taken from an old prayerbook from the 1950’s called The Prayer Book published by the Catholic Press.

The publishers attributed it to Thomas à Kempis, the monk most famous as the author of one of the most celebrated books in Christianity The Imitation of Christ. Whether or not he actually wrote this prayer, it pays a wonderful tribute to this great prophet, pictured above.

Holy and illustrious John the Baptist, chosen friend of Jesus Christ, faithful herald of God, welcome forerunner of the Lord, standard-bearer of the martyrs, greatest among the sons of men, how can I adequately honor and glorify thee? For so great is thy wealth of grace that thy glory outshines that of all the saints. Be mindful of me, I beseech thee, and by my prayers obtain pardon of the Supreme Judge for my sins. Plant in my heart the seeds of virtue, so that, free from sin, I may be worthy to be filled with the grace of the Holy Ghost; and when the battle of life is ended may I, by thy help, come to the gate of endless bliss. Amen.

John the Baptist’s “wealth of grace” mentioned here is so great indeed that there is what we call a pious belief, although not a dogma of the church, that Jesus’ cousin was born without Original Sin, having been filled with Holy Spirit from Birth (“even from His mother’s womb”) as proclaimed by the angel Gabriel to his father Zachariah in Luke’s Gospel (1:15).

That may help shed some light on his quite inspiring devotion to our Lord, making him a “chosen friend” indeed. When we first encounter John the Baptist in Matthew’s, Mark’s, and Luke’s Gospels, those evangelists refer to him as the one prophesied from the book of Isaiah (40:3), “the voice of one crying out in the desert, ‘prepare the way of the Lord make straight his paths’”. The Baptist calls himself that voice in John’s Gospel (1:23).

As we read in this regard in a footnote in the Ignatius Study Bible  “John is the desert voice calling Israel to prepare for the Lord's coming. Just as roads were improved for the procession of ancient kings, so John prepares for Jesus' arrival and the salvation of all flesh.”

Indeed, one of the great church Fathers (from the 5th century), St. John Chrysostom, once wrote “But to cry, ‘Prepare ye the way of the Lord’, was not the office of the king, but of the forerunner. And so they called John the voice, because he was the forerunner of the Word.”

John the Baptist was delighted to be such a “forerunner” of the Lord, the Word made Flesh (John 1:14)! We see in scripture that he is a truly blessed mixture of humility and boldness.

Some of his most inspiring words were those he said of his cousin Jesus that “He must increase; I must decrease” (John 3:30). This sentiment can be ours as well to the extent that we allow our Lord to work with and through us in our daily lives!

Yet John was not at all shy in giving quite candid rebukes of hypocritical religious leaders, and even Herod Antipas, the ruler of Galilee. He scolded Herod for having married his half-brother Philip’s wife, which was against Mosaic law. This led to John’s being imprisoned and later executed (hence he is named in the prayer above as a “standard-bearer of the martyrs”).

We see John’s boldness in a few places in the Gospels. He called the Pharisees and Sadducees who came to see him with more frivolous intent rather than seeking true repentance for their sins, a “brood of vipers'' (much like our Lord calling them out for their hypocrisy saying “woe to you” before enumerating their various misdeeds in Matthew’s Gospel chapter 23).

John reminded them quite strikingly, in case they prided themselves as being sons of Abraham, that God could raise up stones to be children of that great Old Testament Patriarch (Matt 3:7)!

Note as well that John reinforced Jesus’ Gospel message of the connection between love of neighbor and justice in this scriptural excerpt: “And the crowds (who came to see him) asked him, ‘What then are we to do?’ And he answered and said to them, ‘Let him who has two tunics share with him who has none; and let him who has food do likewise.’ And publicans [tax collectors] also came to be baptized, and they said to him, ‘Master, what are we to do?’ But he said to them, ‘Exact no more than what has been appointed you.’ And soldiers also asked him, saying ‘And we, what are we to do?’ And he said to them, ‘Plunder no one, accuse no one falsely, and be content with your pay.’” (Luke 3:10-14).

Going back to John’s humility, as portrayed in scripture, the Baptist knew he was not worthy to tie our Lord’s sandals (John 1:27), and even questioned why he should be baptizing Jesus rather than Jesus baptizing him.

John was clearly more than happy to announce our Lord’s arrival and then to baptize Him, as Jesus instructed him to do so, as He put it, “to fulfill all righteousness,” even though Jesus had no need for John’s baptism of repentance (Matt 3:15), as He was without sin.

Incidentally, Jesus Himself paid his cousin a wonderful tribute when he said that no one born of a woman was greater than him, yet the least in the kingdom of heaven was greater (Luke 7:28). (This makes you realize just how much sanctity pervades there and it ties in with the  line in our prayer about John being “greatest among the sons of men”!)

John the Baptist was fiercely devoted to our Lord, calling himself at one point the best man (John 3:29) to our Lord’s being the bridegroom, (symbolically speaking of His church, the Bride of Christ, incidentally), rejoicing greatly at hearing His voice.

A lesser man might have tried to take our Lord’s glory for himself in some way. He may have wanted to take credit and usurp the throne, as it were, especially when he was asked if he were indeed Israel’s long-awaited Messiah, or perhaps Elijiah, or a prophet in the likeness of Moses come to announce our Lord’s arrival. He was certainly well-known enough that even King Herod Antipas liked to listen to him (Mark 6:20) before he had him executed.

Speaking of which, as mentioned earlier, John’s fearless way of speaking out also led to his being martyred. Here’s a quick recap of the famous account in Matthew’s Gospel (14:3-12) of the events leading up to the Baptist's untimely and unjust demise. Remember first that John had called Herod out for marrying his half-brother Philip’s wife, and Herod had John imprisoned.

Herod might have wanted to have the Baptist executed but was fearful of doing so because so many people had high regard for him as a prophet. However, Herod's wife Herodias clearly had it in for John after the Baptist's reproach.

One fateful day she was able to extract her cold-blooded revenge. Her daughter Salome delighted Herod so much in a dance before many of his guests at his birthday celebration that he foolishly offered her anything she wished as a reward. At Herodias’ prompting Salome asked Herod for the Baptist's head on a platter and he complied, having John who was then imprisoned, beheaded!

Herod’s foolishness and vanity, and no doubt his fear of being embarrassed in front of his guests if he didn’t comply with this horrid request, led to John's gruesome end!

Intriguingly, according to a private revelation given to the 19th century mystic Ven. Anne Cartherine Emmerich as recorded in the book The Dolorous Passion of Jesus Christ when Christ appeared before Herod the morning of His death, the King treated Him condescendingly, peppering Him with questions about His ministry. Herod even asked Jesus to perform a miracle for him as if our Lord were a guest on some sort of Biblical Tonight Show!

Jesus was having nothing of it, and stayed silent before Him. Perhaps if Herod had shown any sort of genuine repentance for having had John executed and his adulterous relationship with Herodias, Jesus might have treated him differently, but clearly our Lord felt a dignified silence was called for in this case!

To sum up, in our day-to-day lives, we can clear a path for the King of Kings to work within and through each of us. Follow John’s example to help “plant the seeds of virtue” mentioned in this prayer and let Jesus increase so that you may decrease.

This is not to say that you shouldn’t act and live as one of God’s beloved children and make use of whatever talents He has given you. But rather, let whatever sinful inclinations and pettiness within you decrease, so that Jesus may increase and people can see Him working in and through you!

Think of this as a great way to welcome our Lord in your own heart and soul as well. Let Jesus take over in those moments when you feel most cranky, unforgiving, lazy, spiteful, and whatever else!  And may this prayer help inspire you to clear paths for Him, as John the Baptist sought to do, in your life!