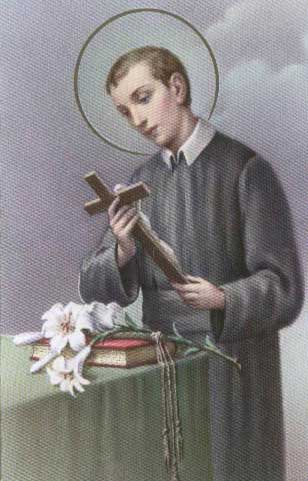 These prayers to St. Gerard Mejella, pictured above, pay tribute to his powerful intercession as the well-known patron saint of mothers and expectant mothers alike. Although born in poverty in a small town in Southern Italy and in frail health, St. Gerard had a great impact on many of those who sought his help.

He was able to do extraordinary things, such as reading people’s hearts and souls and curing their illnesses, and many miracles were attributed to him during his short life, as well as after his death from tuberculosis in 1755 at the age of only 29.

St. Gerard was especially devoted to helping the poor and needy, providing for both their spiritual and physical needs with his special God-given gifts. For example, St. Gerard (like our Lord) was able to multiply loaves of bread for them on occasion. (No wonder he has been called a “wonder worker”!)

Although a tailor by trade, his love of God propelled him to seek a religious vocation early on. After being denied entry into the Capuchins because of his health, he entered the Redemptorist order as a lay brother in 1749, and worked there as a tailor, cook, sacristan, and infirmiran, among his other duties.

The great Saint Alphonus Liguori, the founder of the Redemptorists, called him “a miracle of obedience”, as he obeyed his superiors both when they were present and absent as well, by reading their thoughts!

This first prayer to St. Gerard is for Motherhood:

O good St Gerard, powerful intercessor before God and wonder worker of our day, confidently I call upon you and seek your aid. On Earth you always fulfilled God's designs, help me now to do the holy will of God. Implore the Master of Life, from whom all paternity proceeds, to render me fruitful in offspring, that I may raise up children to God in this life, and in the world to come, heirs to the Kingdom of His Glory. Amen.

This second one, known as a “Prayer for a Safe Delivery,” touches on a cross St. Gerard had to bear, when he was falsely accused by a pregnant woman of fathering her baby. He answered her charges with the same stoic silence as our Lord did when facing His accusers during His Passion.

Fortunately, the woman publicly recanted her false accusation before long, which only enhanced St. Gerard’s reputation for sanctity in having borne this accusation in a dignified manner.

O great Saint Gerard, beloved servant of Jesus Christ, perfect imitator of your meek and humble Savior, and devoted child of Mother of God, enkindle within my heart one spark of that heavenly fire of charity which glowed in your heart and made you an angel of love. O glorious Saint Gerard, because when falsely accused of crime, you did bear, like your Divine Master, without murmur or complaint, the calumnies of wicked men, you have been raised up by God as the patron and protector of expectant mothers. Preserve me from danger and from the excessive pains accompanying childbirth, and shield the child which I now carry, that it may see the light of day and receive the purifying and life-giving waters of baptism through Jesus Christ our Lord. Amen.

Before his death, St. Gerard requested that a small sign be placed on his door that summed up his life very well: "Here, the will of God is done, as God wills, and as long as God wills."

He was beatified by Pope Leo XIII (who once called him “one of those angelic youths whom God has given to the world as models to men”) in 1893, and was canonized by Pope Pius X in 1904. His feast day is October 16th. In 1977, St. Gerard’s chapel in St. Lucy’s Church in Newark, NJ was dedicated as a national shrine.

For just one example of why St. Gerard is called the patron saint of expectant mothers, it should be noted that his prayers and blessings once saved the lives of a mother dying in childbirth, along with her baby.

Over the centuries countless women have prayed to St. Gerard for help with pregnancies. We hope the prayers to St. Gerard above can help those of you seeking to have children!