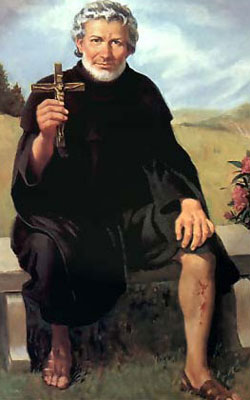 THIS WEB PAGE IS ALSO AVAILABLE AS A PODCAST HERE

Are you suffering from cancer? Or do you know someone who is? These prayers to St. Peregrine can give you hope! This first one is for those afflicted with this deadly disease:

St. Peregrine, whom Holy Mother Church has declared Patron of those suffering from Cancer, I confidently turn to you for help in my present sickness. I beg your kind intercession. Ask God to relieve me of this sickness, if it be his Holy Will. Plead with the Blessed Virgin Mary, the Mother of Sorrows, whom you loved so tenderly and in union with whom you have suffered the pains of Cancer, that she may help me with her powerful prayers and loving consolation.

But if it should be God’s Holy Will that I bear this sickness, obtain for me courage and strength to accept these trials from the loving hand of God with patience and resignation, because he knows what is best for the salvation of my soul. St. Peregrine, be my friend and patron. Help me to imitate you in accepting suffering, and to unite myself with Jesus Crucified and the Mother of Sorrows, as you did. I offer my pains to God with all the love of my heart, for his glory and the salvation of souls, especially my own. Amen.

The second of these prayers to St. Peregrine is for others’ intentions.

O great St. Peregrine, you have been called "The Mighty," "The Wonder-Worker," because of the numerous miracles which you have obtained from God for those who have had recourse to you. For so many years you bore in your own flesh this cancerous disease that destroys the very fiber of our being, and who had recourse to the source of all grace when the power of man could do no more. You were favored with the vision of Jesus coming down from His Cross to heal your affliction. Ask of God and Our Lady, the cure of the sick whom we entrust to you. (Pause here and silently recall the names of the sick for whom you are praying) Aided in this way by your powerful intercession, we shall sing to God, now and for all eternity, a song of gratitude for His great goodness and mercy. Amen.

St. Peregrine is known as the patron saint of cancer patients, AIDS victims and others suffering from serious illnesses. These two prayers give us an intriguing glimpse into his life’s story. Peregrine Laziosi was born in 1260 in Forli, Italy to a wealthy family. Although he was a member of an anti-papal party as a young man, he experienced a profound change of heart, much like St. Paul’s conversion in its intensity.

He and some companions showed up one day to heckle and otherwise abuse St. Philip Benizi, the Prior General of the Servants of Mary, who was preaching in Forli. Peregrine went so far as to strike him in the face! St. Philip, seemingly following our Lord’s advice in scripture (Matt 5:39, Luke 6:29), offered his other cheek in response.

This gesture so moved Peregrine that he quickly asked for Philip’s forgiveness and soon thereafter converted to Catholicism, spending much time in prayer at the Chapel of Our Lady at the Cathedral. Mary appeared to him there in a vision asking him to join the Servite Order in Siena. He was received there by St. Philip!

Peregrine spent the rest of his life ministering to the poor and the sick, mainly in his hometown of Forli where he established a new house for the Servites. His dedication to the faith was such that, according to tradition, he would stand constantly instead of sitting down, as a form of penance.

He underwent a severe trial when he developed a cancerous sore on his leg (as we see in depictions of him such as the one above) as well as his feet. Doctors decided upon amputation as treatment.

The night before the operation, Peregrine spent the night in prayer before a crucifix in a hospital chapel. He dreamt at one point there that Christ came down from the cross and healed his leg. When he woke up, he and his doctors, made the joyful discovery that he was completely cured. God had truly performed a miracle on this holy man!

Peregrine himself performed numerous miracles in his life. After his death in 1345, there were countless others, especially in Spain. The Church attributed to him more than 300 cures of cancer and other illnesses from 1694 to 1726 in one city there alone!

It’s no wonder that as we read in the opening of the second of our two prayers to St. Peregrine, many Catholics refer to him as the “mighty” and the “wonder-worker!” He was canonized by Pope Benedict XIII in 1726.

Although there are an increasing number of cancer survivors, there is still no cure for this disease. Prayer is always needed in the fight against cancer, along with research and education, such as that provided by the American Cancer Society.

We hope the prayers to St. Peregrine above can bring you comfort and strength from our Lord. He Himself, like St. Peregrine, as we are reminded in these prayers, was no stranger to suffering!

© 2020 OUR CATHOLIC PRAYERS All Rights Reserved