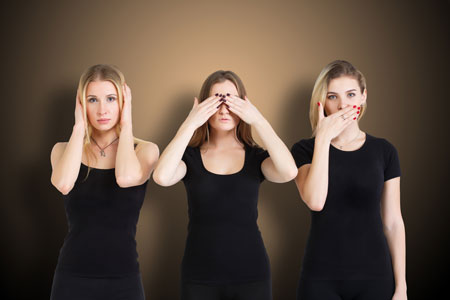 In these anxious uncertain times when many worry about the spread of the coronavirus, it's worth focusing on another kind of virus that’s all around us, one from which we can by no means be easily quarantined. It’s the virus of Social Sin.

Can sin be contagious? Absolutely! God the Father told St. Catherine of Siena in one of her visions transcribed in her celebrated book The Dialogue: “every virtue is obtained by means of your neighbor, and likewise, every defect.”

Or, to put it more simply, each of us can be either a good or a bad influence on others! Clearly, what we might call social sin, that which we spread to others, is like a multi-car pileup. One bad driver can cause many wrecks!

As we read in the Catechism of the Catholic Church: “We have a responsibility for the sins committed by others when we cooperate in them: by participating directly and voluntarily in them; by ordering, advising, praising, or approving them; by not disclosing or not hindering them when we have an obligation to do so; by protecting evil-doers. Thus sin makes men accomplices of one another and causes concupiscence, violence, and injustice to reign among them. Sins give rise to social situations and institutions that are contrary to the divine goodness." (CCC1868-1869).

Participating in sinful behavior doesn’t have to involve evil intent to cause great damage to souls nonetheless. For many of us, vices such as gambling, drinking, drugging, and sex outside of marriage, along with bribery and other such forms of corruption, offer the allure of social acceptance and creature comforts.

Yet these pleasures are often fleeting and can imperil souls with nasty side effects such as alcoholism, sexually transmitted diseases, broken families, and shattered lives!

Teenagers have always been traditionally vulnerable to peer pressure and wanting to fit in, (much like the rest of us). And many of us grow up still acting and thinking like high school nerds who desperately want to hang out with the cool kids!

The contagion of social sin is made that much worse in a world filled with mean streets. Many of our inner cities have become breeding grounds for sin like standing water for infected mosquitos! Gangs prey on many fatherless young people either to join them or get out of the way of their battles and drive-by shootings (if they can)!

In addition, many people are caught up in the morass of what might be called inherited sins, (apart from Original Sin). When parents don’t provide any love or guidance for their children, those kids often treat their own kids the same way. Thus fear, resentment, and anger are passed down like wretched family heirlooms.

Likewise, and more tragically, there are numerous cases of child molestation now coming to light.  (This is in addition to the sins of the clergy.) What is most tragic about molesters is that many of them were molested themselves, which is not to excuse such behavior, but rather to point out how horribly inter-generational it can be!

God designed us from the very beginning to be social creatures when He created Eve from Adam’s Rib so he wouldn’t be alone (Gen 2:18). Satan, once the rebellious angel Lucifer who would not serve God according to His wishes, used her in his diabolical plan to cause humanity’s degradation and downfall.

Adam and Eve ate of the forbidden fruit supposedly to be like God, knowing good from evil, and the rest, sadly, is history. We lost Paradise and, ironically, the sense of what was truly good and evil as well!

While we have an inherent desire for what is good, thanks to our fallen nature many of us are profoundly ambivalent about goodness itself! St. Paul famously lamented his inclination to do what he knew was wrong in his letter to the Romans (Rom 7:15-20).

We learn quickly as children not to be thought of as goody-goodies. The rebel and the bad boy (and nowadays bad girl) were first romanticized in movies and music back in the 1950’s and things have gone downhill ever since.

When you were younger, your parents may very well have asked you when you wanted to do something potentially harmful that everyone else was doing, “if so-and-so told you to jump off a cliff would you do it?”

Spiritually speaking, we very well might, depending upon our disposition and vulnerabiliteis. How many people countenance corruption in workplaces and various bureaucracies so they can “get along to go along”? Or otherwise keep silent for fear of losing their jobs, their reputations or even their homes and families?

So many of today’s sins involve our lust for power and prestige, or just giving into peer pressure, so as not to be outcasts. And, as mentioned earlier, there are mean streets and impoverished areas that breed sinful behavior, such as gang activity and drug abuse, which often go hand in hand.

In addition, in many places where corruption and bribery take hold it is hard for people not to get sucked into a nasty vortex of institutionalized theft. When everyone’s thumbs are on the scales and transactions become more and more crooked, situational ethics take over from God’s Commandments. The ends are said to justify the means!

Officials in both the public and private sectors become partners in crime. And they set a terrible example, allowing those engaged in petty and not so petty forms of larceny (such as muggings, bank robberies, and burglaries) to justify their nefarious activities saying in effect “Everybody else does it! Why shouldn’t I get mine?”

One might well recall in this regard our Lord’s justified anger at the money changers making the temple not a house of prayer but rather a den of thieves (Matt 21:13)!

Speaking of thieves, Saint Jean-Marie Vianney, the celebrated 19th century Curé [parish priest] of the French town of Ars, once scolded his congregation about the willingness of some of its members to cut corners in selling food or livestock.

In one sermon he chided those who might think, as he put it, “I do the same as everyone else. So much the worse for anyone who is taken in. I have been cheated; I try to cheat in my own turn; otherwise I would lose too much.”

The Curé then responded by way of a challenge: “Is it, my children, that if others are damning themselves, then you must need damn yourselves also? They are going to Hell -- must you then go along with them? You would prefer to have a few extra pennies and go to Hell for all eternity? Very well.” (Chilling, isn't that?)

We all like the lines in the Beatitudes from the Sermon on the Mount about the poor and the meek being blessed. but the line about blessed are they who are persecuted (Matt 5:10)? Not so much! It is an understandable part of our human nature that no one wishes to be ostracized or ridiculed. Life indeed is difficult enough as it is.

The value of human respect depends upon the context in which it is sought. If it is in conformity with God’s wishes, this is good indeed. But if it is not, the desire to “fit in” could well lead us like lemmings off a cliff, with our souls falling into hell as well!

For example, relativism has become, ironically, orthodoxy although it is being replaced more and more by political correctness. Many young people are gravitating towards secular humanism or occult practices. The “if it feels good do it” mentality of the 1960's is still very much among us.

It has eerie echoes of the Satanist challenge to God: “Do what thou wilt” rather than “Thy will be done.” And given our fallen human nature, such thinking can be very infectious and spread like wildfire!

Traditional Catholicism has always stressed the need for us to have some degree of detachment from this world. Not too long ago, we were taught to avoid not only immorality but those who would encourage it. We see this in scripture. For example, in the Psalms we read that one is blessed who steers clear of the wicked or scoffers (Ps 1:1).

Granted it is by no means easy to be on our guard against sin, especially nowadays. However, we must turn to our Lord now more than ever and seek His wisdom in Scripture, prayer, and partaking of His sacraments.

Without being Polyannish about this, it’s more important now more than ever to try to be an example of virtue rather than vice, not in a smug self-righteous way, but rather as a sinner among sinners, pointing others whenever and wherever possible to a better way to live, that which follows God’s laws of love: His Ten Commandments!

This doesn’t mean acting “holier than thou”, of course. It means rather letting Christ live in you and treating others as He suggested to the scribe in the Gospel (Mark 12:28-31). That is to say, loving your neighbor as yourself. It means, for example:

• Holding your tongue and not spreading malicious gossip, or dirty jokes

• Not overindulging in alcoholic beverages or doing so called “recreational” drugs, as these can cloud your mind and your will in all sorts of nasty ways

• Not looking to cheat others in daily financial transactions, be they large or small

• Not bearing and sharing grudges

• Being faithful and loving to your spouse and family

• And, this especially, praying for those you know who are caught up in a horrible vortex of sin! Those in broken families, those caught in the quicksand of nasty addictions, those who feel lost, those who rankle you the most! (Granted, this one is especially difficult!)

Our Blessed Lord asked us to pray for our enemies (Matt 5:44). And His mother Mary told the three child visionaries as Our Lady of Fatima that many souls go to hell because they have no one to pray and fast for them. Be one of those who prays for, rather than curses others!

In short, seek to follow Christ as much as you can. Use the temptations he allows you to experience to increase in humility and awareness of your own sinful proclivities. And ask God in prayer and in your own words to help you deal with them better.

Dont ever smugly assume you’ve conquered sin and look down on others struggling with their own temptations. And don't ever assume that those same sins have conquered you either! Strive to be an example of goodness and patience remembering that God tells us to love him with all our strength (Luke 10:27).

St. Thomas Aquinas once wrote that grace perfects nature. God has so many graces He wishes to give each of us! If you haven’t already begun to cultivate a relationship with our Lord now is a great time to do so! (2 Cor 6:2) Remember that Jesus died for all of us on Calvary but also just for you.

Father Jon Bartunek in The Better Part, his excellent book on Christian meditation, speaks of several ways in which we can approach our Lord, all of great value: As Lord, as teacher, and as friend. Just remember not to try to “go it alone” without asking for God’s help through prayer and the sacramental life. You weren’t meant to!