THE LITANY OF SAINT MICHAEL 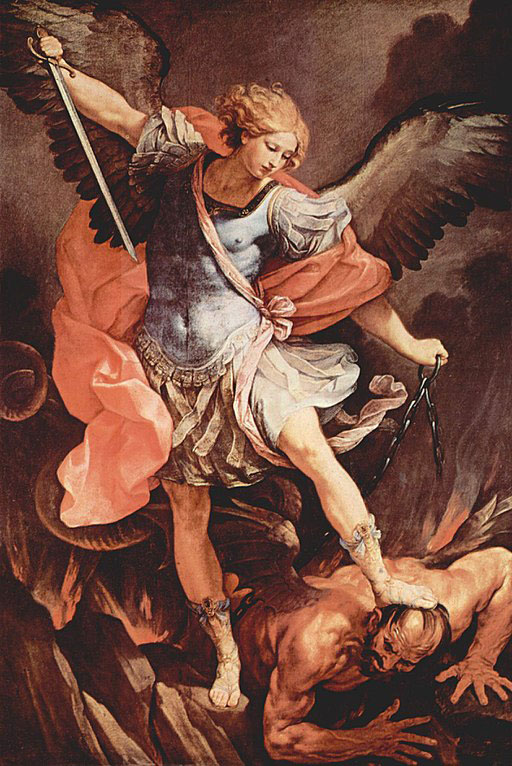 THIS PAGE IS AVAILABLE AS A PODCAST HERE

In these days when it seems like everything’s corrupt, both in the church and society at large, this litany of St. Michael, printed below, is a great prayer for spiritual combat against Satan and his fellow demons!

It is more important now than ever to remember that God is still in charge; and that in the end His Goodness will triumph over whatever evil he permits us to endure in the name of respecting our free will to choose Him.

God has not left us in the Catholic faith without resources to grow in holiness, no matter how errant some of His clergy may be these days!

In addition to His vital sacraments of the Eucharist and Penance, each of us has a Guardian Angel to help guide us through the minefields of evil and misfortune in our day-to-day lives and this prayer (also available as a podcast) can help us remember that!

We also have another angel to help us, one of the best fighters we could have, Saint Michael the Archangel, honored in this litany below. It can be prayed alone or in a group setting.

(In a church service or other such setting, the group responds to a leader with the italicized words below. Each response in the Litany of St. Michael is repeated after each line until a change appears.)

Let us pray.
O Lord Jesus Christ, may your continual blessing sanctify us, and grant us through the intercession of Saint Michael the wisdom that teaches us to lay up our treasure in Heaven and choose eternal goods over those of this world. Thou, who lives and reigns forever. Amen

(Keep in mind as well that The Prayer to St. Michael, also available as a podcast, is a great shorter prayer to recite to yourself after Mass. It used to be recited publicly then. You can also pray it at any other time you think it might be appropriate.)

The word angel itself derives from the Greek word angelos which means messenger. As such, we see numerous instances in scripture in which angels give people various messages from God. One of the most well-known of these is the angel Gabriel’s announcement to Mary that she was to be the Mother of God (Luke 1:26-38).

Whereas we human beings are a composite of soul and body, angels were created by God to be pure spirits. Unlike us, they have higher intellects in that they can process thoughts and reactions to various things simultaneously, rather than as we do, a step at a time. They seek to bring out either our Good (as in the good angels, including our Guardian angels) or our ruin (as in the demonic, the fallen angels).

St. Michael is considered to be the guardian angel and protector of the Catholic Church. As Joan Carroll Cruz put it in her book Angels and Devils, published by Tan Books, Christian tradition recognizes St. Michael’s four important functions: “1) to fight against Satan; 2) to rescue the souls of the faithful from the power of the devil, especially at the hour of death; 3) to attend the dying and accompany them to judgment; 4) to be the champion of God’s people, the Israelites in the Old Law, the Christians in the New Testament, and to serve as the Patron of the Church”

St. Michael was the one who led the fight to vanquish Lucifer when he, in his deadly pride and envy, along with a third of the angels, rebelled against serving God. Scripture makes reference to this in Chapter 14 of the book of Isaiah, and in Chapter 12 of the book of Revelation.

St. Michael and the rest of the angels won a decisive victory and Lucifer and the bad angels were cast into hell as Satan and his hideous demons, having lost all their beauty. Michael’s very name gives testimony to this in his famous war cry Micha’el (“Who is like God” in Hebrew) that he uttered going into battle.

In Chapter 12 of the book of Revelation this great event is described thus: “And there was a great battle in heaven. Michael and his Angels were battling with the dragon, and the dragon was fighting, and so were his angels. But they did not prevail, and a place for them was no longer found in heaven. And he was thrown out, that great dragon, that ancient serpent, who is called the devil and Satan, who seduces the whole world. And he was thrown down to the earth, and his angels were cast down with him” (Rev. 12: 7-9).

Saint Michael’s wonderful contributions for our salvation didn’t stop with this decisive battle, however. As we read in this litany, he has been quite active in helping us in our earthly journey towards heaven both in this life and in our afterlife as well.

As the 15th century saint Lawrence Justinian once said “Let all acknowledge St. Michael as their protector and be devoted to him, for he cannot despise those who pray to him…But he guards them through life, directs them on their way and conducts them to their eternal home.”

For those many souls who die avoiding Hell but not quite ready for heaven, Saint Michael, as mentioned in the litany “has received the care of consoling and helping the souls in Purgatory.” This is according to one of the church’s preeminent theologians and Doctors St. Alphonsus Liguori (1696-1787).

Although not mentioned by name, Saint Michael is also considered to be the one who escorted the Israelites out of Egypt in the book of Exodus; and to have defeated Sennachrib’s Assyrian army when they tried to capture Jerusalem in the 8th century BC (2 Kings 9:35)!

In the early years of Christianity he was known as a great healer, as well. In the 4th century AD, the emperor Constantine, attributing victories over his enemies to St. Michael’s protection, built a great church near Constantinople named Michelion which he dedicated to St. Michael. Many sick and infirm were said to have been cured there through St. Michael’s intercession.

St. Michael is said also to have offered significant support to St. Joan of Arc in her battles to save France from English invaders in the 15th century, and later, for those forces that beat back the Turkish armies at the Battle of Lepanto in 1571 and kept Europe from being conquered by the Muslims then.

In this time of such great turmoil and uncertainty in the church, this is an especially good time to appeal to St. Michael for his help in prayer. St. Francis de Sales once wrote something quite relevant today about this great saint and angel: “Veneration of St. Michael is the great remedy against despising the rights of God, against insubordination, skepticism and infidelity”

Don’t be afraid to include this prayer, and others like it such as the Guardian Angel Prayer and the shorter St. Michael Prayer also on our website as well, in your prayer “arsenal” for assistance when the going gets rough. It never hurts to keep in touch with St. Michael, as well as with your Guardian Angel in prayer, or in your own heartfelt thoughts and words as well!

Return from the Litany of Saint Michael
to Litanies