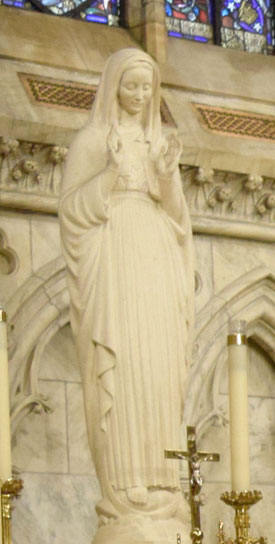 Would you like to read (and hear) a beautiful prayer written about our Blessed Mother Mary? Tota Pulchra Es dates back to the 4th century. Its original Latin text, given below, along with the translation, has been set to music by such noted composers as Robert Schumann, Anton Bruckner, and Maurice Duruflé,

It is a wonderful prayer of praise and petition to Mary that also refers to her Immaculate Conception, an important dogma in our faith, in the line below in the English translation which reads “the original stain [spot] (of sin) is not in you.”

You are all beautiful, Mary,
and the original stain [spot] (of sin) is not in you.
You are the glory of Jerusalem,
you are the joy of Israel,
you give honor to our people.
You are an advocate of sinners.
O Mary,
Virgin most intelligent,
Mother most merciful.
Pray for us, plead for us,
To the Lord Jesus Christ.

Pope Pius IX proclaimed the dogma (a significant truth) of the Immaculate Conception on December 8th 1854. In a papal letter he wrote of Mary as having been conceived without the stain of Original Sin.

[As he put it more eloquently “We declare, pronounce and define that the doctrine which asserts that the Blessed Virgin Mary, from the first moment of her conception, by a singular grace and privilege of almighty God, and in view of the merits of Jesus Christ, Savior of the human race, was preserved free from every stain of Original Sin, is a doctrine revealed by God and, for this reason, must be firmly and constantly believed by all the faithful."]

As such, our Blessed Mother was shielded from having the sinful proclivities that have befallen Humanity ever since our first parents Adam and Eve committed the fateful act of disobedience in eating of the fruit of the tree of knowledge, which in turn drove them out of paradise.

Mary’s role in salvation history is truly unique, although a large number of our non-Catholic Christian brothers and sisters feel sadly uncomfortable when her name comes up, as if we were treating just some woman like a Goddess.

Many Protestants and evangelicals tend to bristle at the mention of Mary's name. It’s as if they’re saying “why do you have to bring her into this”? When the movie Heaven Is for Real came out not long ago, about a 3-year-old boy who had a near-death experience, the boy’s father reacted uneasily to his son’s account of seeing Mary by Jesus’ side.

Nonetheless, we cannot stress enough that we do not worship Mary in our prayers and devotions to her, especially the rosary. We honor her in her unique role in our salvation as the mother of our Lord Jesus Christ. She was the one God spoke of after the serpent tempted our first parents into their calamitous fall from sweet unity with their Creator.

You may recall that famous line in scripture: “I will put enmities between thee and the woman, and thy seed and her seed: she shall crush thy head, and thou shalt lie in wait for her heel” (Gen 3:15). (By another interpretation, Jesus is the one who crushes the head. The heroic hatred towards Satan still stands from both Mother and Son in any case!) Indeed, Mary's “seed”, her offspring, our Lord Jesus Christ, made a heel of the devil through His Passion, death and resurrection!

But it’s important to stress again as a reminder that when we speak of the Immaculate Conception we are talking not of Jesus but of Mary. Her being conceived without Original Sin was essential, not just from some abstract theological perspective but from a quite practical one as well!

We see in sacred scripture more than a few people with feet of clay. Jesus’ genealogy, the tongue twisting Gospel reading we hear mostly at Christmastime (Mt 1:1-17) includes some whose reputations were less than stellar, along with those who were more Godly.

Clearly, the mother of the long awaited Messiah would have to be someone whose soul could be as pristine as that of her child, our Savior. She was, after all, carrying God's most precious gift to us in her womb!

And her life with Jesus was turbulent almost from the start. First Mary gave birth to Jesus in a cave in Bethlehem, not in the Temple in Jerusalem, not even in an inn! (It seems like God wanted to show us an example of true humility in service.)

And soon afterwards, she and St. Joseph had to "get out of Dodge" and flee to Egypt to protect baby Jesus from being killed by the homicidal King Herod, who saw the Christ child as a threat to his sovereignty.

A lesser woman might have been filled with resentment about giving birth in such humble surroundings instead of in the Temple. Or perhaps she would have been puffed up with pride and glorified herself rather than her divine Son.

Or maybe she might have somehow tried to bail out on her responsibilities towards Him as a member of the Holy Family when she became aware of the suffering He (and she by extension) would have to endure!

But being conceived without sin, Mary epitomized love and caring for Jesus up until the very end of His earthly ministry following His death at Calvary, and even beyond that dreadful Good Friday.

We see Mary’s single minded devotion to serving her Divine Son in scripture, as well as in various church approved private revelations and Sacred Tradition. She rejoices in magnifying the Lord in the Magnificat (Lk 1:46-55). In sincere humility she gives all the credit to God for the joy in her spirit in that prayer! And interestingly enough, her last words in scripture are “Do whatever he [Jesus] tells you” (John 2:5).

Our Blessed Mother has also made her presence known through numerous Church approved apparitions on behalf of her Son that have been thoroughly vetted for their veracity.

While Mary’s Immaculate Conception is not mentioned in scripture, it does come up in a rather touching way in one such vision. In 1858, Our Lady of Lourdes told Bernadette Soubirous, a peasant girl in France, to inform the local bishop that she was the Immaculate Conception.

This wasn’t meant to be boastful, but rather to affirm her presence at the grotto in the French town of Lourdes. There was no way little Bernadette could have known about Mary’s being the Immaculate Conception, after all!

As the queen of heaven, our Blessed Mother doesn’t just sit on some royal throne looking down on all of us like some caricature of Marie Antoinette saying "let them eat cake"!

Rather Mary seeks to give us graces entrusted to her by Jesus to help  us be better Christians. These include various inclinations towards sanctity and away from sin for each of us, that includes you. And she is more than ready to be “an advocate of sinners”, as she is described in Tota Pulchra Es.

And as far as asking her to pray for us to her divine Son as we do in the end of this prayer, there’s nothing wrong with that! Protestants often misinterpret St. Paul’s famous comment to Timothy (1 Tim 2:5) that there is one mediator between God and man, Jesus. That doesn’t mean we can’t have others praying to God on our behalf!

Haven’t you ever asked anyone to pray for you? That’s what we’re doing with the blessed Mother, asking her to “pray for us sinners, now and at the hour of our death” in the Hail Mary, for example. Doesn’t it stand to reason that her intercessions to Jesus for us would be quite powerful?

And acknowledging Mary’s part in salvation history on our behalf (and that means yours as well) is a wonderful component of Catholicism! She wishes nothing for us that would go against the wishes and indeed the ardent desires of her Divine Son.

But, like Him she cannot force us to partake of His graces for our salvation. And indeed her love and devotion for Jesus is such that like Him, she mourns the loss of souls! Indeed when she first appeared as Our Lady of LaSallette she was weeping! We can honor and comfort our sorrowful mother through our love, prayers, (especially the Rosary) and obedience to God!

Speaking of prayers to God and our Blessed Mother's prayers for us, note the poignant tone of the simple last lines of Tota Pulchra Es as reflected quite beautifully in this rendition by the composer Anton Bruckner in this clip below. May it inspire thoughtful meditation in your soul!