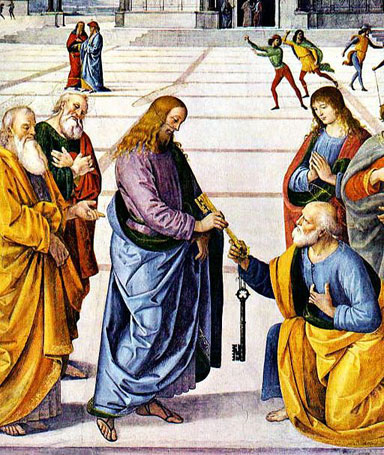 Jesus’ question above to his disciples answered by St. Peter still has resonance today, perhaps now more than ever! Peter had the right answer when he said “You are the Christ [the Messiah], the Son of the living God” (Matt 16:16), but sadly too many people these days in a world steeped in sin and confusion would beg to disagree.

The Christ, the son of the Living God? What? A prophet, maybe, as the Muslims would say. A wise teacher perhaps, a philosopher. But the Son of God? God Himself as part of the Trinity (Father, Son, and Holy Spirit)? In Islamic teaching this truth is tantamount to blasphemy! One God in Three Persons? That’s polytheism, they might say!

This not to disparage Muslims per se, many of whom are quite devout. But Christianity faces a great challenge nonetheless from the Jihadists and their sympathizers. For them Jesus might be a great prophet, but His being “True God from true God” (as we say in the Nicene Creed) who died for our sins? No way! And they have no problem with using violence to reinforce this belief among those they call infidels, and that includes us Christians among many others!

Judaism rejects both Jesus’ divinity and the Trinity as well. One can readily understand their reluctance to see Him as the Messiah, given that not only did He not free the Jews from Roman occupation, but he also did not establish heaven on earth.

Anti-Semitism has hardened many hearts for many well-meaning Jews who after centuries of various pogroms and persecutions even before the Holocaust, don’t see the wolf dwelling in peace with the lamb, as foretold in a well-known prophetic passage in the book of Isaiah (Is 11:6).

I write this not to cast aspersions against those who practice those faiths, but to point out their points of view nonetheless. It brings to my mind, especially with that city being such a hotspot these days, Jesus’ lament over Jerusalem soon before His Passion: “Jerusalem, Jerusalem!... How often I have wanted to gather your children together, in the way that a hen gathers her young under her wings. But you were not willing!” (Matt 23:37).

Many people invoke His Name only when they drop a jar of pickles on the floor, or something like that. Recently, Steven Crowder, a well-known Internet talk show host, asked Amazon’s wonder gadget Alexa some basic questions for a gag, including this one: “Alexa, who was Jesus Christ?” Alexa’s shocking answer, fitting in with the zeitgeist of many millennials I fear, was: “A fictional character”!

Misconceptions about Jesus abound, as they have since His birth in a cave in Bethlehem. Mark Twain once observed over 100 years ago, that God created man in His image, and man returned the favor. The well-known author Mark Shea once listed a few quite misguided notions; for examples, that Jesus was merely a social revolutionary, a Mediterranean peasant, a magician; and the son not of God, but of Mary and a Roman soldier!

Speaking of wrong ideas about Jesus, C.S. Lewis summed it up beautifully in his great book Mere Christianity about those in his time (as in ours!) who said that Jesus was just some wise teacher. About those who would call Jesus a great moral teacher but not God, he wrote that “A man who was merely a man and said the sort of things Jesus said [such as that He and God the Father were one, in John 10:30,for example] would not be a great moral teacher. He would either be a lunatic—on a level with the man who says he is a poached egg—or else he would be the Devil of Hell… But let us not come with any patronizing nonsense about His being a great human teacher. He has not left that open to us. He did not intend to.”

Poignantly enough, Jesus was called a “sign that will be contradicted” (Luke 2:34) when he was merely a little baby by the just, devout Simeon who saw He was the Christ of the Lord, the anointed one. And Christ has indeed been such a sign, and not just in His passion or during the various persecutions over the following centuries.

For one prominent example, in the 4th century AD the heresy known as Arianism caused much upheaval over Jesus’ identity. Was He really God or just the best of God’s created creatures? Thanks in no small part to St. Athanasius, the question was settled as to the truth of Jesus’ Divinity as the Son of God, "God from God, Light from Light, true God from true God,begotten, not made, consubstantial with the Father", as we profess in the Nicene Creed each Sunday!

Our Lord performed many miracles in his brief earthly ministry, some of which are recounted in the gospels. Yet, we are not worshipping David Copperfield or Harry Houdini! Christ’s total and complete loyalty to His Heavenly Father and His Commandments buttress our faith that He was indeed the Word made flesh who dwelt among us (John 1:14), after all.

I have also found great affirmation of Jesus' Divinity in the miracles occurring after His resurrection as well. (And remember, He walked among us for forty days after His death at Calvary!)

Exorcists can well attest that demons do indeed exist and that this "carpenter’s son" (Matt 13:55) strikes in them the same kind of fear and loathing today that their fellow fallen angels expressed about Him in the Gospels (such as in Mark 1:21-27 and Matt 8:28-32).

And while we must practice discernment about such matters, there have been numerous accounts of Christ's being present in near death experiences, and among various saints in visions (such as those experienced by Saint Thomas Aquinas back in the 13th century, and, more recently Saint Faustina in the 1930’s.)

Speaking of presence, this “wise teacher”, this “golden rule guy”, makes Himself present to each of us at Mass and in the tabernacle in the form of bread and wine.  Sadly, non-Catholic Christians and even many Catholics themselves, don’t believe our Lord’s words in John’s Gospel that His flesh is true food and his blood true drink (John 6:55).

Yet, in His wondrous mercy, Christ has provided ample proof of His Real Presence in the Eucharist in the form of human blood emanating from Communion wafers, as recounted in Joan Carroll Cruz’ book Eucharistic Miracles.

Ponder for a minute just how great this miracle that takes place thousands of times a day in churches all over the world. So many that people tend to take it for granted if they think about it all!

• Who could do what today would probably entail thousands of dollars of microsurgery with a touch of his hand, when He refastened Malchus’ ear after Peter cut it off with a sword (Luke 22:51)

• Who allows Himself to be summoned by a priest at the words of consecration at Mass to become “Body Blood Soul and Divinity” under the appearance of bread and wine….

• Who underwent a brutal scourging, mock trial and crucifixion for humanity’s salvation and as the ultimate Sin offering to His Heavenly Father…

Did all this, to be with you! And to give you much needed spiritual nourishment and guidance on the rocky and often convoluted road to Heaven. And He would have undergone His Passion just for you if you were the only person in the world!

He wants you to be with Him forever in Heaven, but He cannot force you to choose Him. That option He leaves to us. Yet through His church He has given us an abundance of graces to follow Him towards Eternal Life, both in the Eucharist and especially in the Sacrament of Penance (Confession) where, through the priest, He is always ready to forgive us our sins as long as we are truly sorry for them and resolve to do our best, with His help in prayer, not to repeat them.

Also, never forget that our faith in our Lord is His supernatural gift to us, and as such requires Christians to accept truths that are themselves supernatural, most prominently such as Christ being born of a virgin, and, of course, His resurrection!

As St. Peter, the one who first confessed Jesus to be the Messiah as mentioned above, put it so well in one of his letters: "For we were not following fictitious tales when we made known to you the power and coming of our Lord Jesus Christ, but we had been eyewitnesses of his grandeur...And we have the word of prophecy, surer still, to which you do well to attend, as to a lamp shining in a dark place, until the day dawns and the morning star rises in your hearts...For not by will of man was prophecy brought at any time; but holy men of God spoke as they were moved by the Holy Spirit" (2 Pet 1: 16, 19, 21).