PRAYER BEFORE A CRUCIFIX

Do you ever feel like no one loves you, like no one cares? The Prayer Before A Crucifix can give you a poignant, if painful, reminder of just how much God loves you, and how special you are in His eyes.

The Prayer Before A Crucifix is also listed in some prayer books as a Prayer to Jesus Crucified. It sums up beautifully the feelings we should have of love for our Lord and remorse for our sins as we contemplate His dying as if He were a common criminal for our salvation!

BEHOLD, O good and sweetest Jesus,
I cast myself upon my knees in Thy sight,
and with the most fervent desire of my soul
I pray and beseech Thee
to impress upon my heart
lively sentiments of faith,
hope and charity,
with true repentance for my sins
and a most firm desire of amendment:
whilst with deep affection and grief of soul
I consider within myself
and mentally contemplate Thy five most precious Wounds,
having before mine eyes that which David, the prophet,
long ago spoke in Thine own person concerning Thee,
my Jesus: “They have pierced My hands and My feet,
they have numbered all My bones.”

The Prayer Before A Crucifix can help us better reflect on our Lord’s Passion and on our own spiritual well being. The crucifix itself, a cross with a painted or carved representation of Christ’s body, began to be used in devotions around the end of the 6th century. It plays an important part both in the procession and on the altar at Mass.

The cross and crucifix are both sacramentals, defined as either objects (such as statues, medals, holy water, and rosaries) or prayers (such as blessings or chaplets) from the Church that can help prepare us to receive God’s grace. Sacramentals are not to be used as Divine Lucky Charms, however! We have to be open to doing God’s will in our lives for them to be effective.

Although people often pray in front of a crucifix in church, you can say the Prayer Before A Crucifix elsewhere, such as at home, using one of many smaller ones available.

The quote given at the end of the Prayer Before A Crucifix comes from Psalm 22:17-18, (also listed in some older prayer books as Psalm 21). Tradition has it that it was composed by King David himself some one thousand years before Christ’s Passion. Our Lord was very much aware of the scriptural relevance of His mission while living as both God and a man among us in the 1st century.

He clearly saw Himself as the suffering servant prophesied centuries earlier in Isaiah Chapter 53 whose wounds for our sins would heal us. Christ willingly submitted to His arrest at Gethsemane the night before His Passion, asking if He were to resist, “How then shall the scriptures be fulfilled, that so it must be done?” (Matt 26:54)

Jesus’s sacrifice was indeed a precious gift for all of us and each one of us, for you, as well, as mentioned earlier. What does He ask from us in return? As we read in the Prayer Before A Crucifix “lively sentiments of faith, hope and charity,” as well as true contrition for our sins.

St. Augustine called the cross a pulpit from which our Lord taught mankind. Indeed, Christ gave us lessons in faith, hope and charity in fulfilling Divine Justice for our sins by suffering and dying on the cross so that we might have Eternal Life.

Jesus showed us faith by trusting in His Father’s will and accepting His death for our salvation. He showed us hope in opening the gates of heaven for us to share Eternity with Him through His passion. And when it comes to charity he spoke volumes in dying for us while we were sinners so that we would be “reconciled to God through the death of His son,” as St. Paul put it (Rom 5:10).

Jesus also gave us a lesson in charity not just in His selfless sacrifice for us but also in His mercy, by the example He set in asking His heavenly Father to forgive His tormentors (Luke 23:34). He also gave us, through St. John, His Blessed Mother as our Mother as well (John 19:26-27) in His last moments on the cross!

Christ also taught us about the importance of “true repentance” (from the Prayer Before A Crucifix) for our salvation in assuring the contrite Good Thief (St. Dismas) being crucified alongside Him that “Today you will be with me in Paradise” (Luke 24:43).

We can show our penitence through the Sacrament of Reconciliation and in asking God for His help in avoiding temptations and sin. When we meditate on His Passion we can better appreciate how tragic our sins are to our Lord.

After all, as we read in Isaiah 53:5, he was “pierced for our offenses.” In the Stations of the Cross we lament that our personal sins as well as those of humanity in general, led to His crucifixion, as mentioned earlier.

The reference from Psalm 22 found in the Prayer Before A Crucifix seems particularly both fitting and chilling in describing our Lord’s suffering on our behalf. The five wounds He received in His crucifixion included blunt nails through His hands and feet and a spear thrust in his side, out of which flowed blood and water, upon His death.

Keep in mind that the heart wrenching crucifixes we see, like the Fra Angelico painting above, are actually toned down representations of how Jesus really looked at that point! Mel Gibson’s acclaimed movie The Passion of the Christ shows a more accurate depiction of just how much of our Lord’s body was covered in scars and blood at His crucifixion, literally from head to toe!

Also note this other striking parallel between an event in Psalm 22 and an event in our Lord’s Passion: people mock the afflicted person in that psalm, saying “He hoped in the Lord, let him deliver him: let him save him” (Ps 22:9). Jesus was similarly taunted at His crucifixion by those who said “Let him now come down from the cross, and we will believe him. He trusted in God; let him now deliver him” (Matt 27:42-43). 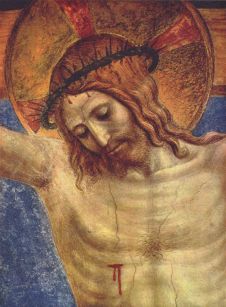 Perhaps you’ve wondered from time to time, “Why didn’t He just come down from the cross? Why would God go through all that?” That thought is both very natural and very human! Jesus says to us, in effect “I had to do this, for you. Trust Me on this!” The Prayer Before A Crucifix invites us to ask for God’s grace as we accept in faith the necessity of His Passion.

Many theologians and scholars have marveled over the centuries at the depth of totally selfless love that our Lord felt for each of us in making this sacrifice! He wanted to show us just how much He loved us, to inspire us to love Him back by following His example.

That doesn’t mean you have to be a martyr or a hero on tonight’s 11 o’clock news! You can show Christ your love and gratitude in acts of kindness and charity towards others each day, much as St. Therese did with her Little Way. As our Lord said, “If you love me Keep my commandments” (John 14:15).

By following the Ten Commandments we can better show our love for Him and for each other as well. Likewise, the Prayer Before A Crucifix can help deepen our love for Jesus. Remember, His death on the cross here on Earth enabled us to share Eternal Life with Him in heaven!

Return from Prayer Before A Crucifix
to Lenten Prayers