SOME THOUGHTS ABOUT STATUES
TORN DOWN AND WEEPING 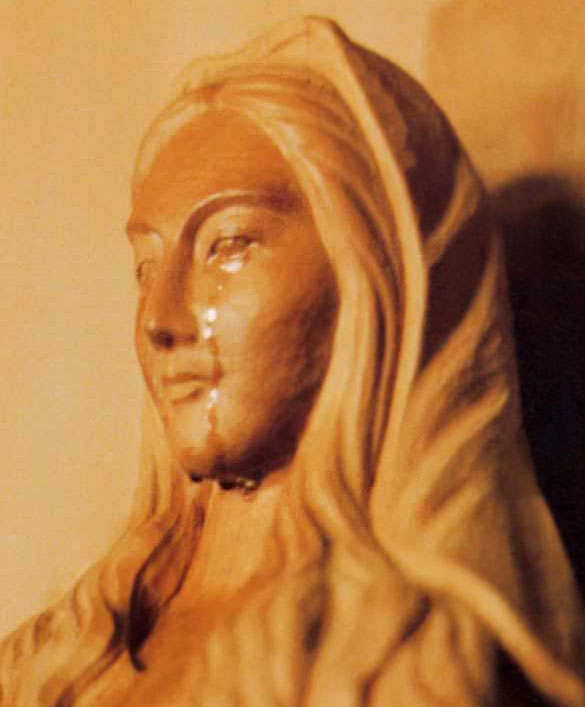 I’d like to start off this page with a short prayer on our subject, statues torn down and weeping:

Dear Lord, help those causing mayhem these days see the error of their ways as they move from ostensibly fighting injustice to creating conditions where it may flourish in unforeseen ways. May they see You as their only hope in setting things right. While this seems impossible now with You all things are possible. Help me to redouble my own prayers and efforts to help bring this about. Heavenly Father I ask this through Christ our Lord, amen.

In the midst of the pandemic, economic uncertainty, and rioting breaking out in cities from coast to coast, there is a festering tumor growing in our society these days, one that could well spread and metastasize like a cancer that takes over and kill’s one’s body.

Whatever you want to call it, Marxism, Freemasonry, Globalism, Radical leftism or some combination of all of these, it is emerging as a force clearly inimical to Catholicism and Christianity itself.

It might be coming from those who have undergone politically correct indoctrination in their classrooms, or perhaps may be struggling with family or libidinal issues. Anyway you look at this, it’s potentially highly toxic both for our faith, and for society in general.

What started off as a move to tear down statues memorializing Confederate leaders, then past presidents, now includes the Catholic Saints Junipero Serra, the missionary who helped bring Christ and Christianity to California where he founded nine Catholic missions in the 18th century; and Saint Louis, the 13th century king of France the only one to be canonized by the church. He built cathedrals, churches, libraries, hospitals and orphanages during his reign to care for people.

In addition, one commentator has even been making noises about going after churches with their stained glass depictions of Jesus!

While a statue of St. Junipero Serra was torn down in San Francisco, one of St. Louis was saved from those out for their own brand of justice, in the city that bears his name, by a courageous priest, Father Stephen Shumacher, along with members of the laity.

Whether or not such impulses from those cheering as statues come down are explicitly Marxist, they share in some way Marx’s antipathy towards religion as the opiate of the masses keeping them from achieving true justice, peace, and harmony, as if Christianity was a chain on our hearts that must be broken!

When viewed from this distorted prism, Junipero Serra brought not our faith to the native Americans in California but rather repression and slavery. But it was Pope Francis himself who once said that Serra, as he put it, "sought to defend the dignity of the native community, to protect it from those who had mistreated and abused it."

San Francisco Archbishop Cordileone gave a dignified response that included much prayer (including the prayer to St. Michael and the Rosary) at the park where the statue of Junipero Serra was was torn down. He spoke words we need to hear now more than ever against these forces that wish to bulldoze their way into power by obliterating any inconvenient facts that might get in the way of their narrative.

This challenges the notion that getting rid of Jesus and just about anything tainted by Western Civiization will usher in glorious new age free from repression and poisonous “isms” involving race, sex, and colonial or imperial malfeasance from days past. All we have to do is “smash'' all these “isms”, as various signs and banners proclaim and justice will emerge and flourish.

Yet tearing things down is easy! Building them back up is harder. Once a dish is shattered no amount of Krazy Glue will be able to put it back together in one piece.

As Archbishop Cordelione said, in effect, it is one thing to shine a light on past wrongs but we don’t need to usher in an era of darkness in doing so. Tragically, when you look at the Ten Commandments, God’s laws of love and His roadmap, or operating manual, if you will, for humanity, we see the truth is quite the opposite of what these horribly misguided mobs think it is! Their path away from God leads not to some utopia but more likely to an increasingly oppressive, most likely quite incompetent regime.

Only if we use the free will God has given us towards following His Commandments can we come closer to achieving a more just and peaceful society. Given the current notions that mankind can figure this all out with minimal help, if any, from God, it is no wonder we are seeing much chaos, misery, and anxiety all around us these days.

You might have heard it said when discussing the tragedies and unfairness in this world that God is able to bring good out of evil. We can as well, but our own efforts without His help fall terribly short and we often get more bad out of evil, not good, even with the finest intentions. (It’s not for nothing those intentions often pave a road to hell!)

Bringing good out of evil is best achieved when we bring God out of evil, in prayer and making use of his graces to bring out the good in us! The terrible danger now is in tearing down everything in our past as bad and blotting out history for some greater good that will probably never materialize! You can't get Gold from dross no matter how hard you try!

This doesn’t mean we should turn a blind eye to injustices, far from it. But if we look at Christianity as some component of an inherently unjust society we’re not only wrong, but we’re asking for a world of hurt being led by increasingly incompetent power hungry narcissists!

When I saw the picture of the toppled statue of Junipero Serra it made me think of another statue of Our Lady of Akita in Japan (shown above), the source of a church approved verified miracle, which emitted tears on 101 different occasions from 1975-1981.

There have been other such incidences such as in Civitavecchia, Italy where a statue of Mary was shedding tears of blood in1995 (as has been recognized by the church with the backing of prominent clergy).

Another such phenomenon was observed in Las Cruces, New Mexico with tears of a scented olive oil coming from a statue of our Lady of Guadalupe in 2018 although this is still under investigation.

As a reminder, we honor Mary, we do not worship her, any more than we worship statues of her (or anyone else for that matter). Veneration of a particular saint depicted in a statue is by no means worshipping graven images (Ex 20:4) or dancing around the Golden Calf in Moses’ absence (Ex 32:19) as discussed here.

We honor our Blessed Mother for her great love and devotion to her Divine Son, following her desire, with her help and grace through prayers such as the Rosary especially, to “do whatever He tells you” as she told the attendants at the wedding feast at Cana, which are incidentally her last words in Scripture (John 2:5).

There is a well known devotion to Mary as Our Lady of Sorrows that pays tribute to the sufferings she entailed during her Divine Sons’ earthly ministry and Passion.

Our Lady of La Sallette was seen in a church approved apparition  by the children Melanie Calvat and Maximin Giraud in 1846 weeping for fallen humanity.

At Akita, she wept again (as in the image seen above) for all of us, with her tears bearing witness to her anguish over our stubborn unwillingness to listen to her Son and follow Him more faithfully in a world besotted with sin.

It’s as if she were crying out (as indeed she did in effect in messages to Sister Agnes Sasagawa at Akita) as she has in other apparitions to those who would bother to listen: “Will you please listen to me and stop offending my Son? Stop treating Him and His word with indifference, lip service, and outright contempt. WIll you please let Him help you get off the destructive paths you’re on, that you may finally, and fully, choose blessings rather than curses?”

Clearly, our increasingly Godless society would rather ignore her warnings, like a driver speeding up at a flashing yellow light to run through it as it turns red only to careen right into the path of a big rig!

So what can we do about all this? First of all pray like there’s no tomorrow while we still have one, by the grace of God, especially the Rosary. And partake of our churches' sacraments as they reopen, and learn more about our faith as best you can, when you can, so you can give yourself and others that reason for hope St. Peter mentioned that it can bring (1 Pet 3:15).

In addition, now is an acceptable time as St. Paul might have put it (2 Cor 6:2), for all of us to support our clergy who are standing up for our faith and our great saints, as the well known Catholic author and commentator Taylor Marshall implored recently in a YouTube video.

You can do this with your prayers and notes or letters of thanks to those who are fighting sacreligious iconoclastic behavior; and encourage others to do the same. All these good clerics have our backs. Let's show them we have theirs both in spirit and in our presence to help them where possible in defending our Lord and His church.

I'd like to conclude this page with these moving words from Madison Wisconsin Bishop Donald J. Hying’s recent letter on imagery and statues concerning all this destructive activity.

He wrote “as a shepherd of the Church, I cannot remain silent... Our statues, pictures, stained-glass windows, churches, icons, and devotions are holy to us. They are sacramentals, blessed and sacred, visible expressions of the love of God, poured out in the life, death, and resurrection of Jesus and made manifest in the Saints. They remind us of God, His love for us in Christ, and the nearness of the divine. The secular iconoclasm of the current moment will not bring reconciliation, peace, and healing. Such violence will only perpetuate the prejudice and hatred it ostensibly seeks to end. Religious freedom, given to man by God Himself, and guaranteed by our Constitution, allows us as Catholics to practice our faith, build our churches, pray in public, put up statues and crucifixes on our property, and serve the common good through a remarkable network of health care, schools, and social services. We must not surrender our religious liberty to the voices that seek the destruction of our public presence, the diminishing of our sacramental worship, and the denial of our belief in Jesus Christ as the savior of the world. Only the love of Christ can heal a wounded heart, not a vandalized piece of metal.”

Return from Statues Torn Down and Weeping
to Prayer Blog Page