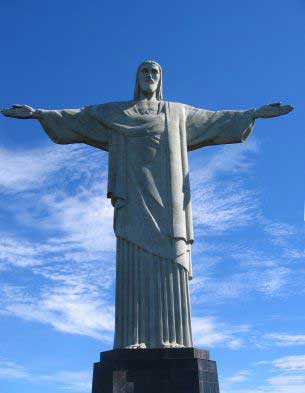 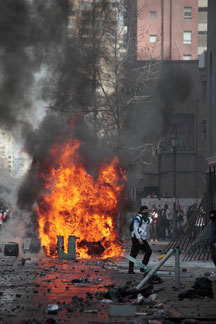 The night before his Passion, Jesus warned Peter that Satan wanted to sift him like wheat (Luke 22:31). St. Peter indeed denied our Lord three times soon afterwards. Nevertheless, he made a strong recovery of faith after Christ’s Ascension and proclaimed the gospel with great courage as we read in the book of Acts (Acts 2:14-41).

Those warnings  for Peter have resonance for us today as well. Today, the Evil One is trying to sift Jesus’ flock, and, as we’ve seen from the various clergy scandals and loss of faith, he’s been having quite a time of it!

Yet the sifting is not just taking place in the church but in the world at large. Governments and banks are playing fast and loose with enormous amounts of debt while more and more people are be suffering and sinking into poverty worldwide. But the poverty is not just economic, it's also spiritual.

We live in an era where Christianity seems to be either on the defensive or on the decline. There is unspeakable persecution of Christians going on in the Middle East. In the West, church attendance in Europe and North America is dwindling compared to what it was only a few decades ago.

And here in the U.S. Catholics and Protestants alike all too often find themselves on the defensive from lawsuits and government mandates about what they can say and do, pitting conformity with God's word against the wishes of the State and political correctness.

Our society has lost its sense of sin and is saturated in sex and self-centeredness, and as a result it is littered with broken families and broken lives. God is often ignored in a superficial, dehumanizing throwaway culture, in which people bow to the Holy Trinity of Me, Myself, and I, dreaming of going viral on Facebook, Twitter, or YouTube.

We live in the age of the selfie. (A friend of mine who was a Eucharistic minister recently told me he had to stop someone from taking a selfie while he was giving him communion!) Speaking of selfies, when it comes to smartphones, many people have replaced talking with texting.

We’re also living in a world where reality, outside of certain politically correct notions, is in considered to be in the eye of the beholder. If I want 2+2 to equal 5 you can’t correct me or else you're invading my safe space or committing a "microaggression"!  Secularism and relativism have left too many people echoing Pontius Pilate when he asked Jesus "What is truth?" (John 18:38).

Statism has quite a number of adherents these days as well, as many people in this country expect government to solve all of our problems and banish inequality and injustice. Indeed, for many, faith in government, despite its noticeable corruption and failures, has supplanted faith in God!

I read on a blog not too long ago that mankind has to choose between Christ or chaos. When God's Commandments are ignored and anything goes, the collective weight of sin bears down on all of us, one way or another. When the faith is diluted, we are deluded!! A priest friend of mine once corrected me about the choice being Christ or chaos. He suggested rather the problem is Christ or confusion. But confusion can well lead to chaos.

When all sorts of calumnies and lies settle into our daily discourse, hearts become more and more hardened and discourse gets uglier and uglier. (Just look at Twitter for quite a few examples!) America is becoming more and more Balkanized. We are increasingly divided as a nation, culturally, economically, and tragically, racially, as we’ve seen in the past few weeks with the shootings and near riots surrounding the police!

Granted, when churches were fuller and God’s word (and His Word made flesh, Jesus) was more respected and honored, we still had much sin and strife in the world (such as two World Wars!). But in today’s more secular society taken we’ve away an important component of resistance to Satan and his darkness: the supernatural graces our Lord wishes to give us in His sacraments.

God in His mercy has given us the Sacrament of Penance to clear our consciences and receive forgiveness for sins, both mortal and venial in Confession when we fall. And He gives Himself to us each one of us, in the Eucharist, where He comes to us both as Lord and friend with graces for those not in a state of mortal sin.

When we turn away from God and Christianity, we often ignore our need for humility as sinners much in need of God’s love, mercy and grace. Sin darkens our ability to see right from wrong clearly. In addition, in turning away from God’s love for us (CCC1850), as do when we sin, we also turn away from genuine love of our neighbor (CCC 1872). We also lose out on receiving Jesus’ important emotional support to get through our earthly trials.

As St. Augustine famously said of God “You have formed us for Yourself, and our hearts are restless till they find rest in You." We try more and more to fill the void meant to be filled by God with drugs (legal and illegal), sex, money, power, possessions, and mindless entertainment. (What’s new with the Kardashians these days?) But none of that can take God’s place! We weren’t meant to go it alone!

Which brings to mind these lines from Psalm 127 (verses 1-2) (126 in the old numbering): "Unless the Lord has built the house, those who build it have labored in vain. Unless the Lord has guarded the city, he who guards it watches in vain. It is in vain that you rise before daylight, that you rise up after you have sat down, you who chew the bread of sorrow. Whereas, to his beloved, he will give sleep."

C.S. Lewis put it so well in his wonderful book Mere Christianity : “God made us: invented us as a man invents an engine…. He Himself is the fuel our spirits were designed to burn, or the food our spirits were designed to feed on…. God cannot give us a happiness and peace apart from Himself, because it is not there….That is the key to history. Terrific energy is expended—civilizations are built up—excellent institutions devised; but each time something goes wrong. Some fatal flaw always brings the selfish and cruel people to the top and it all slides back into misery and ruin. In fact, the machine conks. It seems to start up all right and runs a few yards, and then it breaks down. They are trying to run it on the wrong juice. That is what Satan has done to us humans.”

Jesus spoke in the Sermon on the Mount of a wise man who built his house on rock and a foolish one who built his on sand (Matt 7:24-27). For all practical purposes, in a world where wealth, sex, prestige and power are gods, and people turn their backs not their faces to God (Jer 32:33) many people are building houses of cards on very sandy, shaky foundations!

We’d like to think somehow we in the US are immune from experiencing the crushing hardships of an economic collapse triggered by massive debt, a mass-casualty terrorist strike, or perhaps a takedown of the power grid. But these frightening possibilities are not as safely remote as we’d like to imagine they are these days.

Think of how people practically stomp on each other for dirt cheap 50” flat screen TVs, or other such gadgets, at Wal-Mart the day after Thanksgiving. What would they do for dwindling supplies of food? In a world where it’s everyone for themselves, with few people turning to God for guidance, acquiring basic staples could become a bloody free-for-all!

Peter Kreeft once wrote in this article that our problems were not so much with each other but with sin and Satan! Now more than ever it’s time for all of us to follow St. Paul’s famous advice from his letter to the Ephesians: "Put on the armor of God, that you may be able to stand against the wiles of the devil. For our wrestling is not against flesh and blood, but against the Principalities and the Powers, against the world rulers of this darkness, against the spiritual forces of wickedness on high...And take unto you the helmet of salvation and the sword of the spirit, that is the word of God" (Eph 6:11-12,17).

We can do this through prayer, fasting and other such sacrifices and penances, studying Scripture and learning more about our faith through reading the Catechism of the Catholic Church and wonderful sites such as Catholic Answers, so that we can fight off despair, even in these dark times, and as St. Peter once wrote “Hallow the Lord Christ in your hearts. Be ready always with an answer to everyone who asks a reason for the hope that is in you”  (1 Pet 3:15).

A good part of that hope is for the eternity of Happiness with God and each other in heaven. Offering up our sufferings to our Lord on the cross as described here is also a great way to lessen our pains and help others attain Eternal Life as well!

The more you study and pray the more you can be receptive to our Lord’s promptings for you from His Spirit! Remember that he wants nothing more than to help each of us get to heaven, but we have to work with Him to get there.

Many times that might involve carrying crosses we’d understandably rather not carry with jobs or families or other trying situations, but with His help these can become much more bearable than they might be otherwise, as described here.

Put on the Armor of God. And pray the Rosary! It is not just some dainty prayer. The Rosary is an important source of meditation on the lives of Jesus and Mary. Saint Padre Pio, who experienced real combat with the devil, called the rosary "my weapon" against sin and Satan!

We are clearly heading into turbulent times, where we will need our seatbelts fastened and our tray tables put in the upright position, as they say on plane rides when the air gets choppy.

If you haven’t thought about Jesus much lately, now is the time, as St. Paul once wrote (2 Cor 6:2), to start doing so. For those of you who are lapsed, estranged, or otherwise lukewarm Catholics, there’s no better time than the present to get closer to our Lord and let Him help you carry your crosses. And to let Him help you help others with theirs as well!!

SOME GOOD BOOKS FOR STUDY
AND SOME IMPORTANT ADDITIONAL RESOURCES

You can find vendors for these books and other items from various search engines on the Internet. (As mentioned above, Amazon.com is a great source for many of the books, but a number of them are also available for free on the internet, such as the Catechisms and the Bible. There are even some good apps for some of these books for smartphones!) We also have some of these items available in our Web Store.

The Catechism of the Catholic Church

Books of biographies of the Saints (see also this reading list)

Rosaries (see this page for some background information)

Scapulars (see this page for some background information)

Miraculous Medals (see this page for some background information)

Return from Christ or Chaos
to Prayer Blog Page