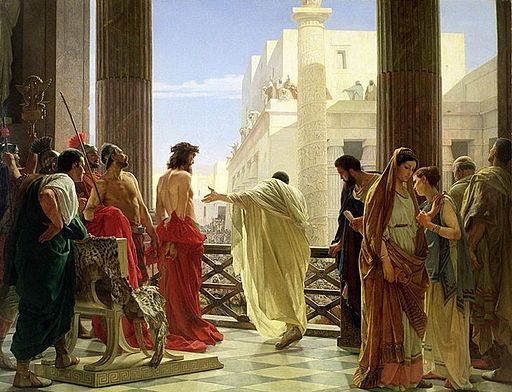 In these unsettling, confusing times, we hear much about this supposedly new phenomenon called “Fake News”.  As Lent draws to a close and we focus on Christ's Passion, we can see fake news in action!

Falsehoods are as old as fallen humanity itself! The first purveyor of fake news in scripture was the serpent in the Garden of Eden, seducing Adam and Eve to eat God’s forbidden fruit from the Tree of Knowledge to become “as Gods, knowing good and evil” (Gen 3:5).

It is indeed ironic that our first parents didn't gain a superior knowledge of good and evil afterwards, but rather quite the opposite! A key part of our brokenness, thanks to Original Sin which we all inherited from them, is our constant inability to distinguish genuine Godly good from evil masquerading as good.

Atheism, Secular Humanism, and that current favorite, Relativism, muddy the waters considerably in putting Man above God as the arbiter of truth and morality. Without a proper knowledge of God, His church, and his sacraments, we lost sheep can go horribly astray, coming across wolves with no sense of danger!

Fake news comes in no small part from our sinful inclinations. God has forbidden us from bearing false witness (Ex 20:16). From that violation of the 8th Commandment comes confusion at best, and mayhem, theft murder, and wars at worst.

Throughout Christ’s earthly ministry, many scoffers among the Pharisees and Scribes spread their own versions of fake news about our Lord. Some did so out of ignorance about His divinity, and others out of jealousy no doubt, over His miraculous accomplishments.

Jesus was often misunderstood and attacked by those who, for example, disputed His claim to be the promised Messiah, under the mistaken belief that He was from Galilee not Bethlehem (John 7:41-42). Pharisees even said at one point that Christ’s ability to drive out demons was demonic in its origin (Matt 12:24).

As mentioned earlier, Christ was also thoroughly maligned during His Passion. In Christ’s Appeal for Love, a book containing private revelations He gave to a Spanish nun, Sister Josefa Menendez, in 1923, Jesus described His sorrow over these slanders:

“All around Me are false witnesses uttering lie upon lie calculated to increase the anger of the iniquitous judges. They call Me a seducer, a profaner of the Sabbath, a false prophet, and the servants and menials, stimulated by these accusations, utter cries and threats against Me.”

Indeed, even our Blessed Mother Mary was insulted at one point as well.As if it wasn't enough for her to see her son bloodied and wearily carrying the cross on which he was to be executed. Or to hear Him so badly vilified in part by the fickle crowd who had given Him "hosannas" on Palm Sunday only a few days earlier!

Blessed Anne Catherine Emmerich, in The Dolorous Passion of Our Lord Jesus Christ, a book recounting her visions of our Lord’s sacrifice for us, notes that one of the ruffians accompanying Jesus on the road to Calvary reproached Mary. He said to her that Jesus “would not have been in our hands if he had been better brought up.” Talk about cluelessness of truly amazing proportions!!

In Sister Emmerich’s book, we also read of another example of fake news. The Pharisees planted grave doubts among some of our Lord’s most devoted followers, from the village of Ophel near the Temple in Jerusalem, while he was on His way to Calvary.

We read that “Jesus had done much for the inhabitants of Ophel, but no sooner did they see him reduced to such a state of misery and degradation, than their faith was shaken; they could no longer believe him to be a king, a prophet, the Messiah, and the Son of God. The Pharisees jeered and made game of them, on account of the admiration they had formerly expressed for Jesus. ‘Look at your king now,’ they exclaimed…all his boasted miracles are at an end; the High Priest has put an end to his tricks and witchcraft.’… their faith was shaken by beholding him thus derided and pointed out as an object of contempt by the High Priest and the members of the Sanhedrin, who were regarded in Jerusalem with the greatest veneration.”

Sister Emmerich recounts elsewhere in her book that after Herod sent Jesus back to Pontius Pilate the High Priests and other enemies of Jesus sent forth agents to alarm the people by intimating “that if Jesus were not put to death, he would go over to the Romans, [and] assist in the extermination of the Jewish nation, for that it was to this he referred when he spoke of his future kingdom. They endeavored to spread a report in other parts of the city that Herod had condemned him, but still that it was necessary for the people likewise to express their wishes, as his partisans were to be feared; for that if he were released he would join the Romans, make a disturbance on the festival day, and take the most inhuman revenge.” Talk about fake news!!

Jesus came among us and died to give us the truth that could set us free (John 8:32). As the Second Person of the Trinity he was both God and man and died to redeem us from our sins so we could have Eternal Life with Him in heaven.

Sadly, when we contemplate Our Lord in His Passion, we must also realize many of our fellow human beings of various other faiths, or no faith, do not believe in the great saving power of His great sacrifice for each of us at Calvary.

This doesn’t make them bad people, or among those beyond the reach of Christ’s mercy and redemption. It just means that for many of them Jesus, and His crucifixion and resurrection as the Son of God is fake news!

This is as true today as it was in St. Paul’s time when he wrote of Christ crucified as being utter foolishness to the Gentiles and a stumbling block to the Jews (1 Cor 1:23). It doesn’t help matters when we have the yearly onslaught of cable shows, especially this time of year, where Pseudo-Scholars advance bold new theories about the Historical Jesus and whether or not He was indeed crucified, rose from the dead, or even existed!

This in itself is nothing new, of course. We read in Matthew’s Gospel how after our Lord’s death on the cross the chief priests and the Pharisees asked Pontius Pilate to put guards and a seal by His tomb so that His disciples wouldn’t be able to steal Jesus' body and claim He had been raised from the dead (Matt 27:62-66)

As it turned out, their spiteful, hardhearted move wound up strengthening the case for Christ’s actual resurrection, as His body was not present when the stone was rolled away!

Matthew also notes how the chief priests bribed the guards after Jesus’ resurrection to claim that the disciples had stolen the body anyway (Matt 28:11-15). More fake news!

And 2000 years later, many still deny the truth of his wondrous resurrection, and not just people of other faiths such as Islam and Judaism! There are even Christian writers who have cast doubts on Jesus’ actually having risen from the dead appearing among His astounded disciples.

Other Doubting Thomases are ready to embrace Christ’s Resurrection as fake news, perhaps because they may have problems with His church and as St. Paul once wrote “if Christ has not risen, vain is your faith" (1 Cor 15:17).

Most of those just mentioned are not deliberately slandering our Lord, not by any means. But the enemies of Jesus who spread slanders against Him in His Passion were bearing false witness, forbidden in the 8th commandment (Exodus 20:16), as mentioned earlier, a grave sin indeed!

Deliberately spreading falsehoods about someone is a mortal sin, because, as we read in the Catechism of the Catholic Church “Respect for the reputation of persons forbids every attitude and word likely to cause them unjust injury…He becomes guilty of calumny who, by remarks contrary to the truth, harms the reputation of others and gives occasion for false judgments concerning them.” (CCC2477)

Sadly, we see false judgments around us these days! Satan, the “father of all lies” (John 8:44) loves fake news! The more the better! Encouraging confusion, anger, hatred and despair is his specialty! When we believe lies to be the truth it becomes that much easier to see evil as good and vice-versa! In this maddeningly relativistic age, where secular society’s creed seems to be Pontius Pilate's: "What is Truth?” (John 18:38)

Christ offers us “the way, and the truth, and the life” (John 14:6) and a solid foundation in stormy times (Matt 7:24-25). I've provided some links below on His resurrection I hope may be helpful in refuting fake news.

This is an especially good time for prayers, especially the rosary, given all the uncertainty these days. We here at Our Catholic Prayers wish all of you a Blessed and Peaceful Holy Week and Easter Season!

SOME RESOURCES ON CHRIST'S PASSION AND RESURRECTION

The Dolorous Passion of our Lord Jesus Christ
(in PDF format)

Our Blog Page on the Resurrection

Peter Kreeft on the Resurrection