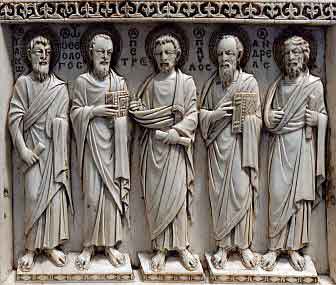 The Apostles' Creed, an important prayer which begins the Rosary, can be traced in its present form back to around the 7th or 8th century AD. It appeared in slightly different forms in documents as early as the year 200 AD. Although this prayer was probably not composed as we know it by the Apostles themselves, it nonetheless reflects their teachings, as well as those found in the New Testament.

The Apostles' Creed is divided into what we refer to as 12 articles. Like the Nicene Creed that we recite at Mass, it is a solid profession of the fundamental truths of our faith:

I believe in God, the Father Almighty,
Creator of heaven and earth; (The 1st article)
And in Jesus Christ, His only Son, our Lord; (The 2nd)
Who was conceived by the Holy Spirit,
Born of the Virgin Mary, (The 3rd)
Suffered under Pontius Pilate,
Was crucified, died, and was buried. (The 4th)
He descended into hell;
The third day he rose again from the dead; (The 5th)
He ascended into Heaven,
And is seated at the right hand of God, the Father Almighty;
(The 6th)
From thence he shall come to judge the living and the dead.
(The 7th)
I believe in the Holy Spirit, (The 8th)
The Holy Catholic Church,
The Communion of Saints, (The 9th)
The forgiveness of sins, (The 10th)
The resurrection of the body, (The 11th)
And life everlasting. Amen. (The 12th)

It’s hard to summarize the Apostles' Creed in a few short paragraphs. The current Cathecism of the Catholic Church offers some 200-plus pages of excellent analysis of this prayer.

The earlier Roman Cathecism (known also as the Cathecism of the Council of Trent, from the 16th century) goes to similar lengths! Still there are a few points worth mentioning on some of the articles.

Although the Apostles' Creed covers Christ's life in a short summary, it by no means slights the Father or the Holy Spirit! Indeed, in the first article we affirm our faith in the God the Father. He is the first person of One God that has existed throughout eternity in the Holy Trinity, in three coequal persons, the Father, the Son and the Holy Spirit:

•The Father as Creator;
•The Son as the begotten Word made flesh and our Redeemer; and
•The Holy Spirit as the one who proceeds from the Father and Son and can help us attain the essential attributes of holiness.
(These include what we call the seven gifts of the Holy Spirit: wisdom, understanding, knowledge, counsel fortitude, piety, and fear of the Lord.)

In the first few centuries of the Church, some people couldn’t quite grasp the concept of the Holy Trinity and sought to refute either Christ's divinity or His humanity.

We see this today in books such as The Da Vinci Code which imply that His divinity was a fourth century fabrication. Nothing could be further from the truth! One can look at such works as Amy Welborn’s best seller de-coding Da Vinci for quite a few facts debunking this claim, (de-bunking Da Vinci, as it were)!

As St. Peter wrote in one of his New Testament letters “We have not by following artificial fables made known to you the power, and presence of our Lord Jesus Christ; but we were eyewitnesses of his greatness” (2 Peter 1:16).

He described in further detail in this letter our Lord’s transfiguration once in which He appeared to be "shining, exceedingly white as snow" while conversing with Moses and Elijah (Mark 9:2-4).

St. John, for his part, mentioned signs Jesus showed of his divinity in his Gospel, “that you may believe that Jesus is the Christ, the Son of God, and that believing you may have life in his name.” (John 20:31)

(So much for Our Lord’s just being some wise philosopher, as some people would have you believe these days!) 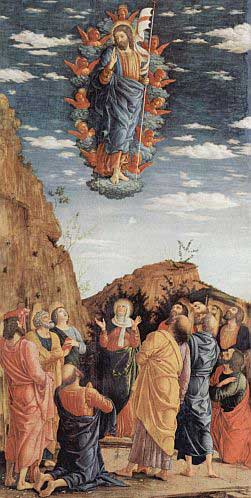 St. Thomas Aquinas, in a lengthy commentary on the Apostles' Creed, noted concerning the third article (concerning Our Lord’s conception and birth) that Jesus “became man that He might make man divine.”

He also pointed out in referring to the articles in the Apostles' Creed concerning Jesus's suffering, death, and glorious ascension into Heaven (Articles 4-6) that these events took place in accordance with His own will and by His own power, for our sake.

(The Ascension of our Lord is depicted in this painting at left by the Northern Italian painter Andrea Mantegna from the 15th Century.)

The line in the fifth Apostles' Creed article “He descended into hell” is also written in some sources as “He descended to the dead.” This refers not only to the place of eternal torment of the damned that we rightly dread, but also in this specific instance to a more benign place for the souls of the just who had died before Jesus.

Our Lord opened the gates of Heaven for them upon His death and resurrection. (And, indeed, those gates are open for all of us who die in a state of grace, free from mortal sin, to join Him in Eternal Life!)

Jesus's place at the right hand of the Father, in Article 6 of the Apostles' Creed, is meant to show us His special place with His Heavenly Father as one with Him, in a manner that we can understand as human beings. St. Paul makes reference to this when he urges us to “seek the things that are above; where Christ is sitting at the right hand of God” (3 Col. 3:1).

It also highlights our Lord's role as the one mediator between God and Man. Who better to bridge the gap between us and our Creator than God Himself in the person of His Son! Indeed, through Jesus we can call God the Father Our Father, as we say in the Lord's Prayer.

In article 7 of the Apostles' Creed, note that Christ will return and will judge all of us, living and dead, in the Last Judgment, separating the sheep from the goats (Matt. 25:32-33), the just from the wicked, as it were. The former will have eternal Life and joy in Heaven (touching on Article 12 here) and the latter will be in eternal misery in Hell.

This general judgment will basically reaffirm the particular judgment each of us will receive upon our death, as to whether or not our ultimate destination is Heaven or Hell.

This will be based on our actions in this life (in what we have done and what we have failed to do, as we say at Mass) and on how receptive we have been to God's graces.

We need not fear this judgment. We must prepare for it by living lives of faith, love and obedience to God. Having a strong prayer life can be a great help in this regard!

The subsequent articles of the Apostles' Creed follow a natural sequence. The Holy Spirit guides and instructs the Catholic Church, from which comes the Communion of Saints (Articles 8 and 9). This includes those of us in the Church living on earth, those in purgatory, and all those in Heaven.

Likewise, when God forgives us our sins (Article 10 of the Apostles' Creed) in the Church's sacrament of penance we may better merit the “resurrection of the body” (Article 11) in which we will be raised up to Heaven, with our glorified bodies united with our souls, at the Last Judgment.

Let us all pray to live our lives, with God's help and grace, in such a manner that at our death, as we read in the famous prayer Anima Christi, He might summon us so that with His saints we may praise Him forever in the bliss of heaven. Talk about life everlasting (article 12)! This wonderful hope for an Eternity of Love in the peace of Christ makes a fitting end to the Apostles' Creed.

Return from the Apostles' Creed to the Rosary