"YOU ALSO WERE WITH
JESUS THE GALILEAN" 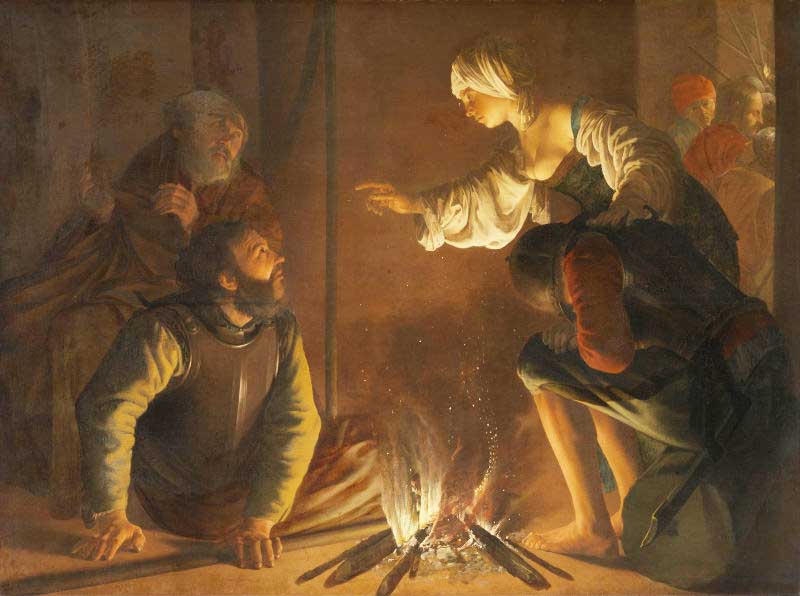 Coming from the Passion Narratives read during Holy Week, these words above from Matthew’s Gospel (Matt 26:69) have a special resonance in this increasingly pagan world. Peter was operating on Palm Sunday adrenaline at the Last Supper, promising fidelity to our Lord no matter what.

Bishop Fulton J. Sheen once wrote that Peter had “an exaggerated self-confidence in his own loyalty.” He might well have wondered how could Jesus even think he would deny him three times before the next morning (Matt 26:33-35).

And didn’t Peter go immediately into battle when Jesus’ enemies came to arrest Him, cutting off the ear of one of the High Priest’s servants? Yet only a short time later the Apostle’s bravado was gone.

It was replaced first by his curiosity about what was happening to Jesus. Then he probably felt great sorrow at seeing our Lord so brutally treated. And after he was recognized in the high priest’s courtyard he must have experienced a stupefying fear of being violently persecuted as well!

The maid depicted in the painting above points a finger at Peter accusing him of being one of Christ’s followers (Matt 26:69) Peter responded by denying he knew our Lord, not just to the maid in the high priest’s court, but to others as well, even with curses! Fortunately, as we all know, Our Lord showed Peter his ever abundant mercy after His resurrection (John 21:15-17).

Peter went on to serve our faith with distinction and great fervor, as shown in the book of Acts, before being crucified upside down according to tradition (as he did not feel worthy to be crucified in the same manner as our Lord was) under the murderous regime of the emperor Nero in 67 AD.

I’ve often thought about how Peter gave us all a valuable lesson in not trusting solely on our own strength in serving and following Jesus. We’d all like to think we could be brave and noble if the situation warranted; no sweat. We’re Christians, after all. We’re good people, right? And yet…it isn’t always so easy to follow the Ten Commandments and to love God “with all your heart, soul and strength” (Deut 6:5) is it?

Christianity is clearly on the defensive in this country and in Europe nowadays. Beleaguered believers everywhere are facing red martyrdom (where people suffer violent death, as in the Christians throughout the Middle East killed by ISIS); or white martyrdom (where they suffer various forms of harassment, lawsuits, ridicule or even loss of jobs). The twin scourges of relativist apathy and political correctness haven’t helped things either!

The way of the Christian has always included the Way of the Cross in one form or another. And as Christ experienced human cruelty in His Passion, we bring a lot of that suffering on ourselves! Such is humanity’s fallen state that we often look to frivolities or even quite brutal ways to fill in the emptiness in our lives where God is missing.

As St. Augustine famously observed about God at the beginning of his Confessions "You have formed us for Yourself, and our hearts are restless till they find rest in You."

As such, humanity as a whole has often followed a rather grimy Yellow Brick Road towards the Emerald City of Man, often worshipping some Great and Powerful Oz who really is only some evil wretch behind a curtain, after all.

In compensating for their own inner weaknesses, tyrants throughout history have often unleashed stunning levels of brutality and destruction in their attempts to play God. From Herod to Hitler, before and beyond, such people are truly scourges upon humanity.

When Jesus is considered to be just some wise prophet, an afterthought, or even a myth, not as the rightful King and Center of our hearts, leaders trying to be Gods emerge, causing all kinds of calamities!

Nowadays atheists and various secular humanists and progressives say “we can get along without Jesus just fine, thank you”. Others follow Christ in accordance with this great line: “God created man in His image and man returned the favor”.

They look to Jesus for inspiration about social justice, but wish to have the State do most of the heavy lifting to help the poor and afflicted, rather than the Church and various charities and communities.

Then the State becomes God. And more ominously in various parts of the world God becomes Allah under the Shariah Law of the Muslim Jihadists worldwide.

As various Wizards of Smart try to move us towards a one-world utopia, the pressure builds on Christians of all stripes to conform to their Brave New World of not terribly diverse diversity and not quite tolerant tolerance, a world in which Christ and His church take a backseat at best to the rule of what is called on various websites “globalism”.

It is not my place here to delve into the veracity of claims that there is some power-addicted committee seeking only their own enrichment at humanity’s ruin.

It is quite disturbing nonetheless to see much of Christ’s Kingdom in the West being relegated to insignificance in favor of some secular technocratic utopia-to-be, with Radical Islam on the rise. Christ Himself has been shunted aside to back rooms and side altars in His tabernacles in far too many of His churches nowadays!

In the meantime, over the past few years, numerous Christians have been martyred in the Middle East, as mentioned earlier, from Radical Jihadists.

In this country things aren't quite that bad…yet! Rather than death, many Christians face an exile of sorts from their schools or workplaces from ostracism or even lawsuits or job termination as described here and here. Of course, they can avoid this grief—as long as they keep their faith to themselves!

Sadly many of us human beings fear the crosses of loneliness or rejection enough to want to “go with the flow”, no matter what. If that means denying our Lord or crucial teachings of His concerning morality, sexuality, and the family, so be it, as discussed in part here.

Those believers in urban areas who live among the literati and the chatterati in New York Washington and Hollywood in particular are especially vulnerable to scorn or ridicule if they stand up for Christ and His Church.

When the maid points her finger saying “you too were with the Galilean” no one wants to reply affirmatively only to hear “What are you? Some kind of bible thumper? What about separation of church and state? You don't really take all that relgious nonsense seriously do you? It’s so medieval and bigoted!”

And, another challenge comes from the atheists for whom science is God, for whom the test tube is the tabernacle. “We have technology!” they might say,“We have breakthroughs coming in artificial intelligence, genetics, and transhumanism, the marriage of man and machine, and more pointing the way to immortality and paradise!” Do you hear the serpent in the garden of Eden hissing “You shall be as Gods” (Gen 3:5)?

Speaking of technology, there is a danger that we all might face in a few years as man worships himself on a globalist altar. The combination of a cashless society with RFID microchip implants in our skin.

On a secular level this road to hell is paved with only the finest intentions.The purpose of a cashless society, we are told, is to help root out international drug cartels, terrorists, and other societal menaces.

Considering how many payments are already digital, what with Apple Pay, Samsung Pay, online transactions and numerous credit and debit cards, why not make it easier, so goes the argument, to check out of a supermarket with just a flick of the wrist? We already use it to locate lost pets, don't we? But at that point, we lost sheep will become even more lost!

Even those who think of Christianity as a contrived fable need to see that implanted chips could be the ultimate way to dominate, control, terrorize, or even liquidate a population.

If you need that “mark”, that smaller than rice grain chip, to buy or sell anything, and they turn off your chip, you starve! (This might also happen even with plastic replacing cash. There are also privacy concerns even if this is all just done by “smart cards” with no implants.)

So, that to me might be the ultimate maid pointing her bony finger at each one of us headed our way: Take the chip and give up your faith; or perhaps trade it in for a watered-down One World Religion to go along with that New World Order conjured up by those burrowing their way into the bowels of bureaucracies everywhere, for your own good of course! And that faith might very well have very little relationship to traditional Catholicism or to Christianity in general!

Hopefully this is only a harbinger of a bad dream. Yet, in any case, Jesus asked us to carry our crosses in following Him and even said we who suffered persecution for His sake would be blessed in the kingdom of heaven (Matt 5:10-12)!

This sounds like quite a tall order, I know. I’m not sure I can measure up to it myself if things get really bad and we face a major depression from the debt crises or a nuclear war, or perhaps from a cyber attack that takes down the power grid.

Would I turn against God then out of a jumble of confused emotions or a misplaced “survival” instinct? I hope not, but studying Peter’s denial has given me a valuable lesson as I mentioned earlier: not to just assume that I can love and serve Christ in any situation without His help and His strength.

How do you defend our Lord and His wonderful faith with others like those mentioned earlier who might challenge your wisdom... or, either directly or indirectly, threaten your livelihood?

Prayer is essential in staying close to Christ in these uneasy, turbulent times, even if its only for a few minutes a day. Even short prayers to check in with your Creator. And try to educate yourself about Catholicism and common objections to the faith, even if it's only an hour or so at a time, when you can.

Websites like Catholic Answers can provide great assistance. Then you can be ready to give a reason for the hope in Jesus inside you. After all, that’s what the man who had denied Him three times, St. Peter, advises us to do in his first letter (1 Pet 3:15)!

That can make it easier for you to explain to people that we're not just a bunch of backward-thinking killjoys. And the more love and patience you can show in letting Christ work through you on this the better!

If nothing else, adopt as Christ-like an attitude towards others as possible with His help and grace. There is a quote attributed to St. Francis that goes "Preach the Gospel at all times, and when necessary use words."

I’ve listed some additional resources below I hope might be helpful in learning more about our faith, And don’t ever hesitate to ask God for His help and guidance through Prayer and His Sacraments!

SOME GREAT RESOURCES TO LEARN MORE ABOUT OUR FAITH

"Our Sunday Visitor" Pamphlet on Defending the Catholic Faith

Catholic Answers
(They also have a great YouTube Channel!)

Some Catholic Answers Tracts Listed On Our Site